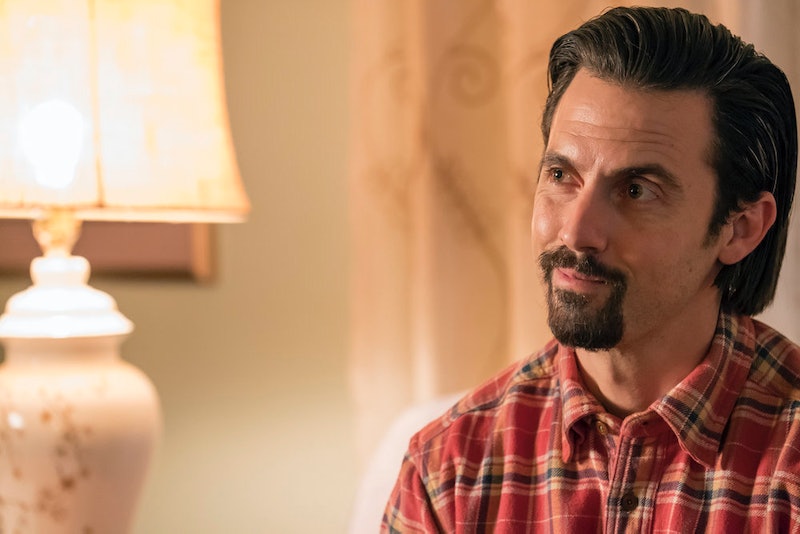 Major spoilers ahead for the Super Bowl episode of This Is Us (series writing: Kay Oyegun). Though many of us fans thought we knew what to expect when it came to the Feb. 4 episode, This Is Us threw us for a loop yet again. It turns out that Jack didn't die in the house fire on This Is Us — he made it out alive, but badly burned and appearing to have inhaled a lot of smoke. As some people had previously speculated, Jack did head back into the flames to retrieve Kate’s dog, who was on the ground floor where the fire started, while the rest of the family got out from an upstairs window, but he still made it out of the house. Of course, he still died. Just in a very different way.

At first, in what was truly a wonderful and heartbreaking moment in one, Rebecca, Randall, and Kate watched Jack walk out the smoky front door, dog in tow, and safe from the fire. What could have been a devastating yet clear-cut death became a lot more complicated. Ultimately, the fact that Jack ran back inside for the dog meant he was in the house considerably longer than the rest of the Pearson clan, and he inhaled a lot more smoke. He also sustained burns when the rest of the family didn’t — he held up a mattress to block himself and Kate from the fire as they tried to make it to the other side of the house, where the severity of the jump out the window was cut down by the presence of an awning.

Jack made it all the way to the ambulance — to the hospital — giving viewers a horrifying and knowingly undeserved glimmer of hope. It was kind of like the feeling I get when I watch Titanic for the billionth time and convince myself that, perhaps, this time, Jack and Rose will both evacuate successfully and lead a long and happy life together. We know it’s not going to happen, but we unreasonably and wrongly hope for the heartbreaking storyline we’ve come to expect will somehow pan out a different way. We’ve been warned and warned for months and months to prepare ourselves for Jack’s death, but somehow, seeing him walk out of the Pearson house relatively unscathed was some new kind of torture.

The aftermath of the episode was pretty familiar — viewers had seen glimpses of it before, but the show fleshed it out in a beautiful and mournful way. Viewers saw Rebecca learning about Jack's death just moments after doctors were frantically summoned behind her to run to his aid. He tragically died of a heart attack after sustaining smoke inhalation that forced his lungs to work harder and, in turn, his heart. He died alone while Rebecca was at the vending machine. It was, in a word, awful.

We also saw the moment Rebecca delivered the earth shattering news to Jack's best friend, Miguel, before gathering her strength and composure to be strong for her children as she delivered the bombshell to two of them.

One of the bottom lines of the post-Super Bowl episode of This Is Us is that Mandy Moore absolutely delivered. She showcased an astonishing and moving performance as she walked Rebecca through such a devastating moment, and it continued throughout the episode. We were with her, as viewers, through all of it, but it felt like more than that. It was raw and real, and anchored viewers through the horrifying turn of events.

The season still has plenty left to come, and showrunners will likely continue to explore the aftermath of Jack's death. At least now, though, viewers can have some semblance of closure. We know that there was a fire, and we know that Jack went back inside to save Kate's dog, which is presumably why she blames herself for his death. We also know he made it to the hospital and pulled a full-on Grey's Anatomy Mark Sloan, seeming like he was battered but enduring after a tragedy, before ultimately suffering cardiac arrest and meeting his end. In the episodes to follow, fans will hopefully get some more details about the situation. They'll also likely stick with the Pearsons through their continued recovery, just as they recover themselves.