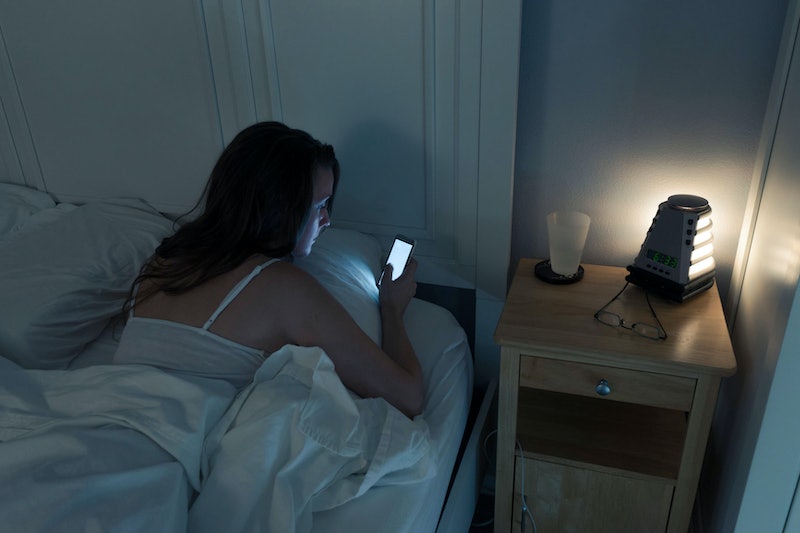 Social media may be a wonderful thing, but boy it can have a detrimental impact on your sleep. From not being able to stop scrolling to needing to be up to date with the your fav celeb's Insta stories, getting some shut eye can often be an afterthought. But exactly how can social media impact your sleeping habits, and what can you do change it?

Plenty of studies have been conducted to explore the link between social media and sleep, and the majority seem to point towards a negative correlation between the two. A small study conducted by Texas A&M University in 2017 explored how social media can have a negative effect on mental health, which in turn can lead to sleep deprivation.

A small group of participants were instructed to use apps like Facebook, Instagram, and Twitter an hour before bed for three weeks, and to not use social media at all for a week. Each morning they would answer a questionnaire to determine their quality of sleep, and the study concluded that "while the differences are not significantly different between [their] experimental conditions, a slight positive effect on sleep quality was observed when no social media tool is used before sleep."

In a similar study published in the Acta Paediatrica medical journal, it was found that even using social media for an hour or two during the day can also have a detrimental impact on sleeping habits of teenage students. Both studies also highlight the issue surrounding the blue light emitted from screens as well, which can "suppress melatonin production," which is the hormone that controls sleep, and can thus make "you think, feel, and perform below your best," according to The Sleep Doctor.

It was reading these studies and articles that actually made me change my sleeping habits last year. As someone who used to boast that they could live on like four hours sleep and stay online until the early hours, I've come to appreciate the art of sleeping healthily — and it's really not that hard to do.

Personally, my cut off point for social media is at 7 p.m., which is when I begin my wind-down phase. I catch up on whatever is on my watchlist — at the moment it's Fresh Off The Boat, totally recommend — for a couple of hours till it hits 9 p.m., then the screens are turned off. I do all the necessary bathroom routines before hopping into bed with a book, and even though my alarm is on my phone, I make sure that stays at least half way across my room so I can't reach it in the night.

And to the dismay of my parents, I literally douse my room with lavender by lighting a candle and spraying diluted oil on my pillows and duvet. Apart from giving me the odd vivid dream (which is totally a thing), the smell of lavender has been my lifesaver when it comes to actually falling asleep. This seems to be because of a component called linalool, which can produce a sedative effect on a "major inhibitory neurotransmitter in the nervous system," sleep specialist Richard Jolie told Lush UK.

If you're looking to reduce your screen time and get a better night's sleep, these are just some of the things you can integrate into your routine; it's all down to personal preference, after all. You do you, boo.