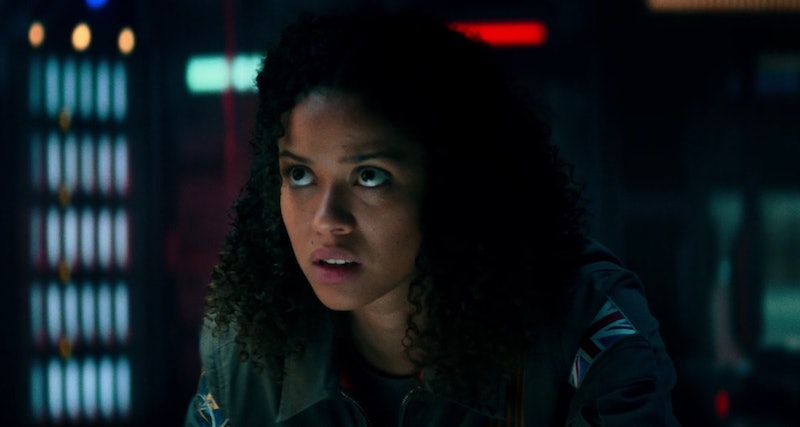 Continuing in the tradition of Cloverfield movies, 2008's Cloverfield and 2016's 10 Cloverfield Lane, The Cloverfield Paradox was released without any context (i.e. plot-driven advertising), making it impossible to know how the film relates to the previous two before actually watching it. So, when the movie dropped on Netflix right after the 2018 Super Bowl, hardcore fans immediately jumped to watch it. And, now that we've all seen it, it's time to attempt to answer the question: how does The Cloverfield Paradox connect to the other movies?

Major spoilers ahead! In some twisted way, The Cloverfield Paradox could be interpreted as a prequel to the Cloverfield movies. The film follows a group of international astronauts living on the Cloverfield Space Station, on a mission to use the Shepard massive particle accelerator to create unlimited energy in space that could power the entire world. An oil crisis has brought the Earth to the brink of war, and this mission is, in many ways, the last chance humanity has at avoiding the collapse of civilization. After almost two years in space, the team is successful, but the unlimited power of the Shepard doesn't create the energy they hoped for: it opens up a breach in spacetime instead. While the Cloverfield crew is sent into another dimension or universe, Earth is hit with monster attacks, something the film says pundit Mark Stambler warned about in his book, The Cloverfield Paradox.

Could the Cloverfield Space Station be responsible for Clover's arrival in Cloverfield and the aliens in 10 Cloverfield Lane? The monsters in Paradox are different from the ones in the previous films, suggesting a brand new story, but it's still possible that the events of The Cloverfield Paradox lead straight into the other films, just not in the way you might think.

After watching Cloverfield Paradox, one thing becomes clear: the "normal" Earth established in the film is not the same one as Cloverfield, which might also not be the same one as in 10 Cloverfield Lane. How do we know this? Well, in the first few scenes of those previous two films, there is no energy crisis, which suggests that they don't take place in the same time. This alone hints that Paradox is really a sequel to the other films, taking place in a world already partially under attack, or having already survived the attacks and regained a sense of normalcy. However, the establishing world of Paradox makes no mention of either a monster attacking New York or an alien invasion, and when monsters finally do attack, the characters seem surprised.

If Paradox was a sequel to Cloverfield, or vice versa, then wouldn't humans already have some experience with massive monsters? (Is this the Cloverfield Paradox IRL?) The plots of the three Cloverfield movies simply do not add up to one cohesive universe, which can only mean one thing: it's not the same universe, it's two (or three) parallel universes.

The Cloverfield Paradox introduces the idea of the multiverse to the Cloverfield series, and it could be the key to understanding how the movies are really connected. In the film, the Shepard's power sends the Cloverfield crew into another universe, causing the laws of physics to seemingly break apart, and even sending them a new, unfamiliar crew member. In this other universe, the Earth is also in a power crisis, but the Oil Wars have already started. The alternate Earth also sent a crew up to space to work the Shepard and try to invent a source of limited energy, but the collision of the two dimensions appears to have knocked the other Cloverfield Station out of the stars, while also opening up the original Earth to monster attacks. In other words: turning on the particle accelerator made massive changes in both universes. Who's to say it didn't also make changes in another universe? Like, say, allowing Clover to land in another version of New York, or bringing alien life to an alternate Earth?

Assuming there is any sort of logic that can be applied to the Cloverfield franchise, there are only two possible explanations for how the movies are connected. The first is simply that they aren't really connected other than sharing a genre, a name, and fun Easter Eggs (e.g. Slusho). The second explanation is the existence of a multiverse in which multiple Earths have been irreparably damaged by the Shepard on the Cloverfield Space Station.

Fans will probably never get answers about how, exactly, The Cloverfield Paradox connects to the other Cloverfield movies — or how any Cloverfield movies connect to each other, for that matter. Then again, speculation and fan theories is part of what makes the Cloverfield series so exciting. It wouldn't be any fun if they just handed us the answers.