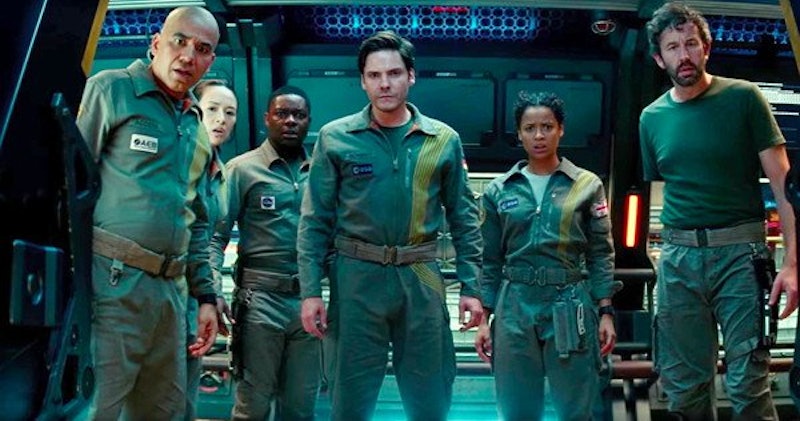 When you watch the Super Bowl, you tend to expect a few surprises. Other than the actual actions happening on the football field, there are always a handful of commercials featuring some celebrity cameos, or perhaps a halftime show that ends up stirring up a major controversy. During the 2018 Super Bowl, though, one surprise overshadowed all the rest — the debut of the trailer for the highly-secretive newest Cloverfield movie, followed by the jaw-dropping news that The Cloverfield Paradox would be available on Netflix immediately following the game. Naturally, fans needed some time to get over the shock, but now that it's been released, we need to talk about what The Cloverfield Paradox ending means.

But first, beware – there are major spoilers ahead, so if you haven't yet watched the just-released third movie in the Cloverfield franchise, stop what you're doing and get started. These are the kind of films that you definitely want to go in blind for, so don't ruin the experience for yourself by learning all about the Cloverfield Paradox ending before you even press play on Netflix.

OK? Good. So, about that ending — basically, it's bonkers. For most of the movie, the crew on-board the Cloverfield Station try to figure out what the hell is going on after the Shepard, their particle accelerator, overloads and seems to have led them into another dimension with no contact to Earth. The ship devolves into total chaos, with crew members appearing out of nowhere or getting sucked into walls like it's NBD. Eventually, enough people are killed or sacrifice themselves that the only ones left are Hamilton (star Gugu Mbatha-Raw), Schmidt (Daniel Brühl), Monk (John Ortiz), and Jensen (Elizabeth Debicki), the mysterious newcomer who seems to have come out of thin air and an alternate world.

Hamilton and Jensen team up to attempt to figure out a way to get back to Earth, but Jensen turns on everyone and kills Monk, desperate to return back home to her dimension. She and Hamilton fight, and Jensen is thrown into space; Hamilton, then, leaves a heartbreaking message to her other-dimension self telling her not only how to fix the Shepard, but to love and value her family (in the real, normal dimension, Hamilton's young children were killed in a fire, but in Jensen's world, they're still alive). She and Schmidt then get ready to return home, getting the Shepard to finally work properly (aka supposedly giving much-needed energy to Earth) and evacuating back to their home planet.

But perhaps they should've just stayed in space. When Hamilton's husband, Michael (Roger Davies) learns that his wife is on her way back to Earth, he flips out, telling the mission control guy not to send her back. Why? Oh, just because the planet is literally teeming with monsters. Yeah, Earth is a hot mess, possibly thanks to what the Cloverfield Station team did with the particle accelerator. Cities are destroyed, war has broken out, and oh yeah, did I mention the monsters? As Hamilton and Schmidt's shuttle enters Earth's atmosphere, a giant monster appears through the clouds. And... that's it. The end.