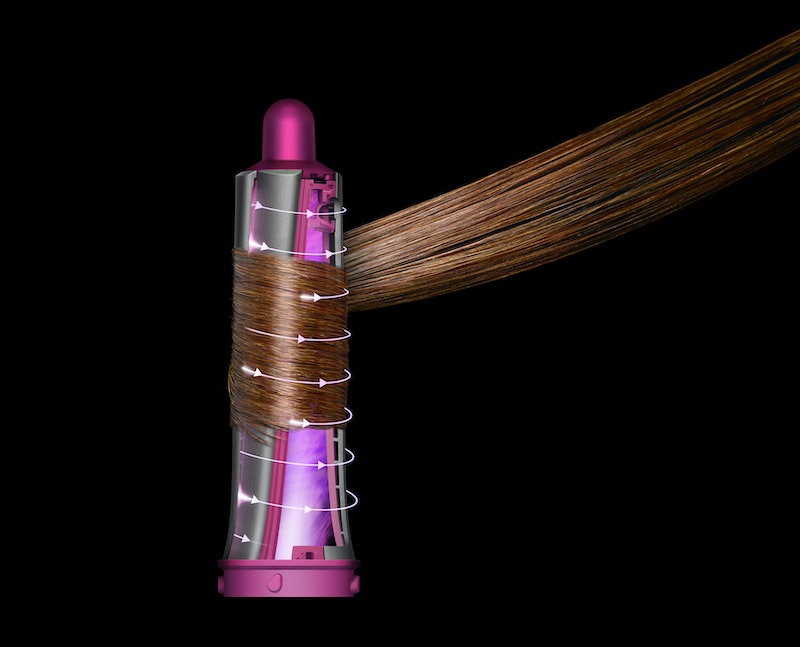 Unsurprisingly, Dyson's latest foray into the hair styling world has been met with acclaim by those with unruly hair, myself included. The aptly named Airwrap promises to style and dry your hair at the same time with no extreme heat in sight, all contained within one device. Whilst the Airwrap utilises innovative technology and speeds up the styling in the process, the idea of your hair being suctioned around a coil by high-speed jets of air does sound just a tad daunting. So, how does the Dyson Airwrap work?

It's all down to understanding airflow, and how certain effects can be utilised. Dyson engineers focused on using the Coanda effect for the Airwrap, a physical phenomenon that "occurs when a high-speed jet of air flows across a surface and, due to differences in pressure, the air flow attaches itself to the surface," as described in a press release sent to Bustle UK.

Engineers then took this effect and adapted it for hair styling with minimal damage and professional ease. I mean, after the success of their Supersonic hairdryer, why not go a step further and change the game of curling irons as well?

To style hair with air instead of excessive heat, Dyson's experts designed a barrel that would encourage the Coanda effect to occur, powered by the small but mighty Dyson digital motor V9 — the same motor the Supersonic uses. "The motor creates high air pressure at the top of the styling barrel, forcing high velocity jets of air from six air slots around the barrel.

"This generates a physical phenomenon known as the Coanda effect which encourages the hair to curl around the barrel to style." So, instead of grabbing a section of hair, wrapping it round a curling iron, holding it in place and then letting it go, the Airwrap does the majority of the work for you.

And forget damaging your hair — or earlobes and fingertips — because this beauty regulates its temperature with a built-in thermostat that "measures airflow temperature over 40 times per second," which "transmits data to the machine's microprocessor which intelligently controls the heating element, keeping the temperature under 150 degrees." Talk about tech magic.

And that's not all this wonder machine can do. The Airwrap comes with a "pre-styling dryer" — aka a mini-Supersonic head attachment — that "prepares hair for styling using a fast but diffused airflow," drying your hair to "the ideal moisture level (damp to the touch) before using the curling barrels.

Then while you use the various attachments depending on the style you're going for, the Airflow will dry and style your hair at the same time resulting in a professional finish that you'd expect in a salon, not with just one device at home.

Even though the cheapest bundle of the Airwrap available comes in at an eye-watering £399, it think I can confidently say that the price is worth what you're getting in this revolutionary piece of tech.

Who'd have thought that 2018 would see Dyson securing their future even further in the hair styling industry?