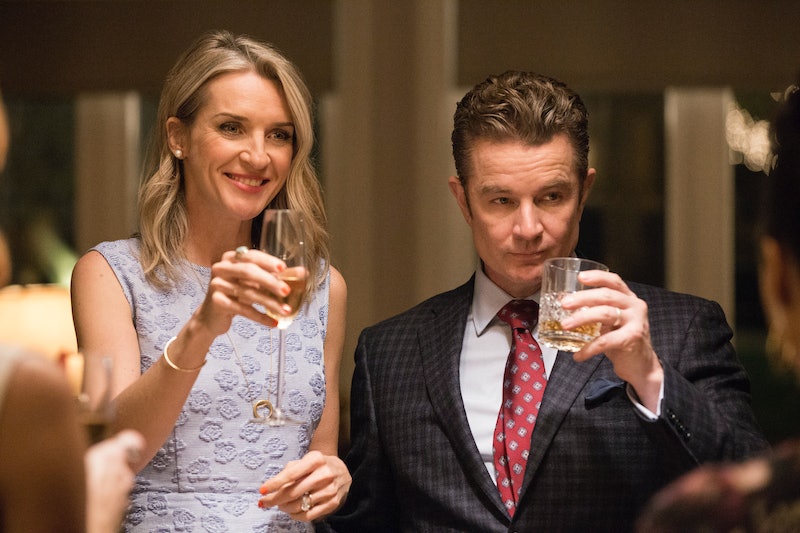 In Hulu's new original Marvel show, Runaways, premiering Nov. 21, the group of teen protagonists definitely can't count on their parents. In the first episode, six teens discover that all of their respective parents are members of the Pride, an evil supervillain group, so family dinners likely won't be the same again. But what is the purpose of this group, and how does it work?

Runaways is adapted from the comics series of the same name. So though the series may be holding back some details about these Los Angeles parents and the secret society to which they belong, the info is out there. Comics spoilers! In the comics, the Pride is an elite group of villains with various powers that have a firm hold on the city of Los Angeles. The Pride first assembled due to a pact with an ancient race of giants called the Gibborim, and the two groups work together in hopes to each garner more strength and eventually wipe out all of humanity to create a new utopia. The Gibborim, however, promise that the Pride will be spared in exchange for their cooperation.

One of the kickers to this arrangement, though, is that the Gibborim require the Pride to make an annual sacrifice to them. They have to sacrifice an innocent human in something called "The Rite Of Blood." That victim is then offered up to — fed, really — to the Gibborim. And after years of the Runaways parents pulling that off successfully, one night it all changes. The six children of the 12 members of the Pride finally witness the sacrifice take place one night, and upon realizing that their parents are villains, reject the same fate for themselves, and become the Runaways.

It's certainly an interesting and severe twist on the typical animosity that tends to exist between teenagers and their parents. "Every teenager thinks their parents are evil. What if your parents actually were?" executive producer Josh Schwartz said to Entertainment Weekly, describing the kids' point-of-view on the show.

The cast making up those evil parents is impressive, befitting secret society. It includes Buffy The Vampire Slayer alum James Marsters as Victor Stein. And though the Pride are the villains of the story, Marsters told Nerdist that his character is far from one-dimensional.

"The thing that I love about acting is that for me, it’s an empathy machine. I’ve played so many villains. I’ve been forced to feel empathy for people who’re making huge mistakes. I don’t think there are villains in this world, I think there are human beings who are hurting each other," Marsters said. "Sometimes with the best intentions. Sometimes we really are less than our best selves, and to be able to recognize that and not judge the huge mistakes that my character is making is a challenge but also a gift."

Ryan Sands, who plays Geoffrey Wilder, another member of the Pride, echoed those sentiments in an interview with ComicBook.com. "I'm excited for fans to see the Pride fleshed out. Yeah, that sounds like I'm biased because I'm a Pride member, but the truth of the matter, we really expose and display who these people are a lot more than they were presented in the book," Sands said. "There's only so much you can do in those pages, and in those volumes. The story undoubtedly, it's about this group of kids, but in the show, there's a lot of time spent with the Pride. And you see why certain decisions were made, you really see the effect of those decisions, the toll that the decisions make on us."

Sands hinted that even those who read the comics might be surprised by the amount of detail put into the Pride's stories in the show. "I have to be honest with you, when I auditioned for the role, I had no idea that Geoffrey was gonna be, any of the Pride members, were gonna be as fleshed out as we were. All I really had to go on was what I'd read in the first volume of the Runaways," he said in the same interview.

However far Runaways chooses to stray from the comics, it's clear that the battle between the Runaways and the Pride won't be a cut-and-dry situation of good vs. evil.

More like this
The 'Ms. Marvel' Review Bombing Controversy, Explained
By Radhika Menon
All The Marvel Easter Eggs You May Have Missed In ‘Ms. Marvel’ So Far
By Kadin Burnett
'Criminal Record' Is The 'Doctor Who' Reunion We’ve All Been Waiting For
By El Hunt
“The Door Is Always Open” For Another 'Breaking Bad' Spin-Off, Says AMC Boss
By El Hunt
Get Even More From Bustle — Sign Up For The Newsletter