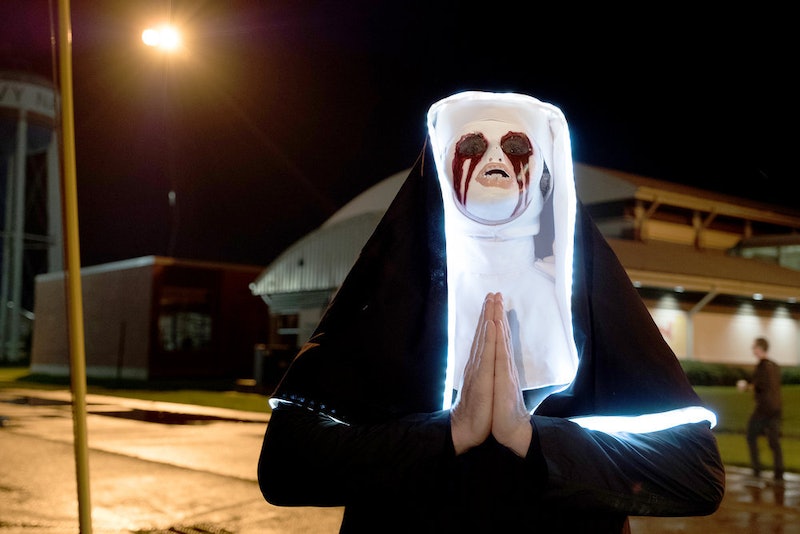 The Purge franchise is one that seems to get more interesting and more layered with every new addition. In 2013, the first Purge film introduced a troubled future, in which one night a year, all crimes were legal. The second film built on that idea, moving the mayhem away from a family's home into the streets, and from there, each movie has continued to build up the details of that twisted, murderous universe. And now, beginning on USA on Sept. 4, the premise is coming to viewers in a whole new way, so how does The Purge TV show connect to the movies?

According to Vulture, the show's timeline is nestled right in between those of the first and second films, meaning that it definitely shares the same universe with the events of the films — it's not just a spinoff that uses the same premise. James DeMonaco, the creator of the films, is also behind the show. He said that while none of the same characters that fans will know from the movies are currently set to appear in the show, there are still plenty of nods to the other films to be found throughout, and the events of the movies definitely impact the lives of the new characters. "What happens in The First Purge has a big effect on two of our main characters," DeMonaco told the outlet.

He also said that the longer journey allows the writers to flesh things out a little bit while still keeping fans on their toes. "It’s not a punch in the face the way the movies were,” he continued in the same piece. "It is a slower burn, except one character is off and running from the first scene."

In a separate interview with Vulture back in 2017, DeMarco elaborated on the plot explorations allowed by the TV show that might not have been the best idea for film. Flashbacks and slower plot movement aims to give background details that viewers never really got to see when they were thrust into the mayhem of the films headfirst. "The movies are more like events. In the TV show, I think we’re slowing it down, and we’re using this flashback structure to enter into the non-Purge lives of these people."

And that's an exciting prospect — the movies have totally focused on the gritty violence that occurs when all bets are off, and learning more about how the country, and these individuals function when life is relatively normal, would lend an entirely new and eerie layer. "We’re going back six months or two years or into their childhood to see some things that might’ve fed into their decision-making on this particular Purge," DeMonaco continued. "The long form is actually allowing it to become more of a character study, which is kind of cool, instead of a singular event of surviving the night."

Audiences have been intrigued by The Purge since the very first movie debuted, so it's no surprise that the people behind it are finding new and interesting ways to continue the story. As reported by IGN, the first film had a budget of just $3 million, and grossed more than $64 million at the domestic box office, so there's been interest from the get-go. It's a set-up that could led itself to so many different stories, and it sure seems that the showrunner is ready to tell them.