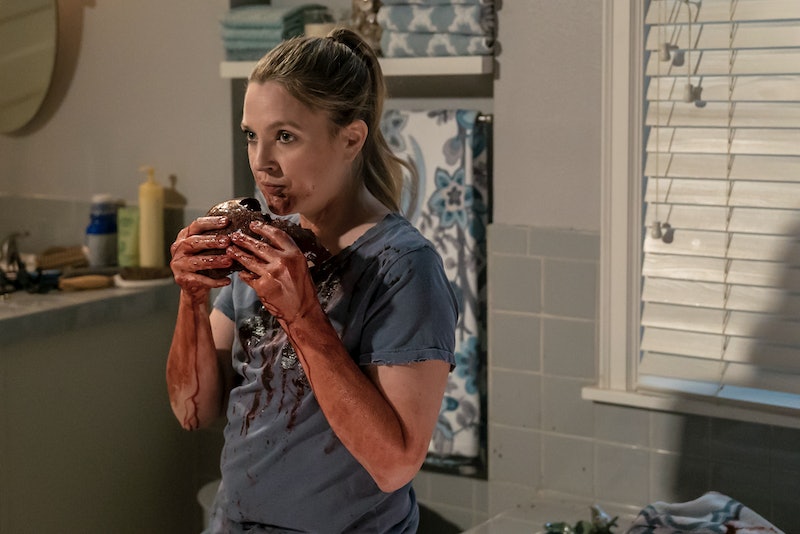 How Drew Barrymore's character became a zombie on Santa Clarita Diet is unclear, but realtor Sheila Hammond is undead nonetheless. Although how the zombie virus on Santa Clarita Diet works is not specifically outlined in Season 1, the sickness still has some rules. By gathering all of the information provided by the first season of the Netflix show, which premiered on Feb. 3, you might not know how to necessarily avoid becoming a zombie, but you'll understand that zombie creation has a long history throughout humankind. Spoilers for all of Santa Clarita Diet Season 1 follow.

As shown less than seven minutes into the first episode, "So Then a Bat or a Monkey," you'll know if you're becoming a zombie if you throw up — in the words of Timothy Olyphant's Joel — "a lot." I'm talking about — in the words of Nathan Fillion's Gary — a "crazy amount of vomit." Beyond the tremendous amount of yellow vomit, you'll also throw up a shriveled red ball that's most likely an organ. From there, you'll be dead, but still somehow alive with less impulse control and craving the flesh of humans. It's as simple as all that for Barrymore in Santa Clarita Diet.

Although Sheila and Joel never figure out how she became contaminated with this zombie virus in Season 1 of the comedy, Sheila does wonder if she could have gotten it from the clams that she ate at the restaurant Japopo's. Getting the virus from shellfish would be a twist on zombie folklore, but that reference could be more of a sex joke than a plot point. And anyway, Sheila's feeling too good as a zombie to really care about how she got the virus.

Sheila does spread the virus — a very common occurrence in zombie stories — in Episode 5, "Man Eat Man." Although she's not certain if she bit bad guy Loki since his jeans were so thick, he does become a zombie like her. If you assume she did successfully bite him and puncture his flesh, then you can also assume that the virus is transferred by biting. Yet, Sheila says she was never bitten and when she bites Joel later, he doesn't become infected (possibly because she didn't break his skin). Unfortunately, Loki being a zombie doesn't prove how the virus is transmitted, but his character does prove that you can successfully kill zombies in Santa Clarita Diet the way zombies are traditionally killed — by stabbing them in the head.

As for how to stop the disease, ex-CDC scientist and fringe virologist Dr. Cora Wolf (oh, hey there, Portia de Rossi!) is the only person to appear to be working on a cure. "Cure" is a strong word though since she says you can't make people undead — you can only stop their deterioration. She also says in the Season 1 finale that the virus could be a resurgence of an ancient plague or a mutation of the rabies virus, but even someone as intelligent as Dr. Wolf thinks speculating any further is pointless.

Despite what Dr. Wolf says, that ancient plague theory is worth some speculation since the virus seems to have origins in ancient Serbia. The remedy that de Rossi's character attempts to create is from a Serbian book from 500 years ago that contains paintings that Joel discovers early in the series. The book documents how an entire town in 16th century Serbia was infected by the virus. (The subtitles on Netflix say the town is called Pozica, which does not appear to be an actual town, although a Božica in Serbia does exist.) The people in the town all became zombies and began eating one another and the book says, "Without a cure, man will die."