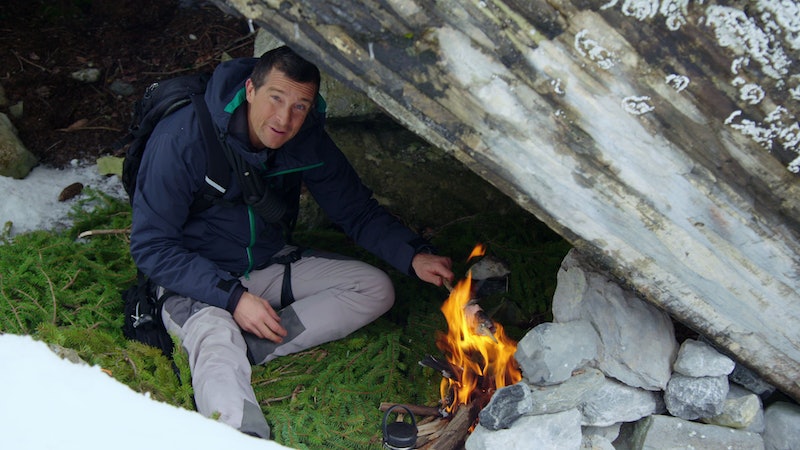 Bear Grylls' career is built on testing his survival skills, but Netflix's new interactive series, You vs. Wild, put his fate into your hands. Rather than watching safely from home, you're...well, you're still watching safely from him, but you're also making decisions about how he reacts to the dangerous situations he encounters while out in nature. And if you don't figure out how You vs. Wild works, you may be the reason that Grylls — for the first time ever — doesn't manage to survive a situation he's in. Of course, Grylls won't actually die, what with the fact that he's still alive in real life, but the choose-your-own-adventure show still asks you to answer difficult questions about how Grylls should get out of scary — if fictional — circumstances. And in the process, you may find out a lot about your own instincts to survive in the wild.

Much like Netflix's interactive paragon Black Mirror: Bandersnatch, there will be moments in You vs. Wild that, according to its trailer, allow viewers to choose between two actions that Grylls can take. Viewers will then be able to click/press/select one of those two options, and Grylls will follow that command. It's possible that, like Bandersnatch, an automated decision will be made should viewers take too long to choose.

Based on the show's trailer, the series seems to follow the same format as Netflix's other interactive programming, but Netflix Director of Product Innovation Carla Engelbrecht told IGN that You vs. Wild has more in common with family-focused interactive shows like Minecraft: Story Mode and Puss in Book: Trapped in an Epic Tale than the choose-your-own-horror of Black Mirror: Bandersnatch. "What are stakes for Bear Grylls? One of the funny things we ran into is we can't kill Bear," she said. OK, so maybe Grylls' blood won't be on your hands, but if you've ever seen Man vs. Wild, you know that you'll still be up against some pretty high stakes.

In fact, the series could offer a pretty valuable educational experience for viewers of all ages. What better way to learn what to do in a survival scenario than getting to use Grylls as a completely safe, trial-and-error avatar?

Plus, it sounds like You vs. Wild is only the first of many interactive projects to come, and while they may not all be as informative, they'll definitely offer a new viewing experience. "Expect over the next year or two to see more interactive storytelling," Netflix's Vice President of product, Ted Yellin, said during a keynote presentation in March, per Variety. "And it won't necessarily be science fiction, or it won’t necessarily be dark. It could be a wacky comedy. It could be a romance, where the audience gets to choose – should she go out with him or him."

The choices in You vs. Wild may be limited to two options at a time, but the possibilities suggested by You vs. Wild are endless — no matter what you end up doing to poor Grylls while watching.