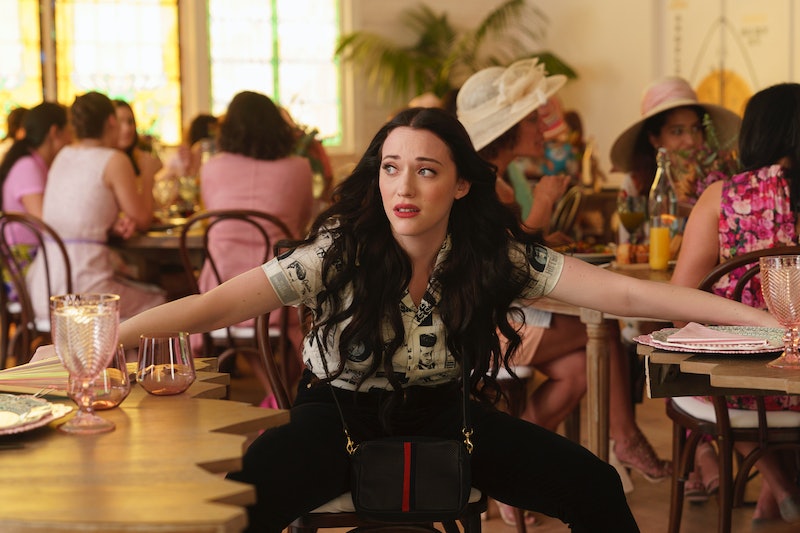 Hulu's new dramedy Dollface is all about living outside your comfort zone, and for 30-something, recently dumped Jules (Kat Dennings), that means overcoming her anxiety around rekindling and forming new female friendships. After being dumped by Jeremy (Connor Hines), her boyfriend of five years, Jules realizes with horror that she spent every day with him and let all her other relationships die. As Jules relearns how to interact with other women, Dollface's magical realist segments become physical manifestations of Jules' anxiety, and capture just how difficult and vulnerable cultivating adult friendships can be.

Magical realism is a genre of literature popularized by Latin American authors, and particularly by Gabriel García Márquez, the author of Love in the Time of Cholera. A magically realist story is not full on fantasy or sci-fi, but it does employ some magical elements to open a commentary about life itself, from questioning the societal, to the mental or emotional. Essentially, whenever Jules is faced with discomfort or uncertainty, reality itself distorts and breaks open, and it's not clear if what she's seeing is actually happening in real life, or if it's just playing out in her head.

This happens most frequently with Jules' vision of a wise old Cat Lady — literally, a lady with a cat head — played by Beth Grant. When Jeremy suddenly dumps her and leaves her stranded in a parking lot, Cat Lady pulls up in a bus full of other heartbroken women. Their destination is female friendship station, and the women have to stay on the bus or else land in sad "Rebound Town" or "Guy's Girl" wasteland, where a bunch of football jersey-wearing women wander the desert proclaiming they like beer and video games.

"If you're here, it means you spent so much time on the other side that you need some help getting back," Cat Lady informs Jules, acting as her therapist. "Relationships with other women are sacred and necessary."

When Jules arrives there's no women to greet her though, and that's when the station attendant tells her all of her female friendships have sadly expired. So Jules seeks out her college best friend Madison (Brenda Song) and Stella (Shay Mitchell) and essentially begs them to welcome her back into the fold. Later, Jules' coworker Izzy (Esther Povitsky) joins them, and Jules finally has what she lost for years: a dedicated squad of women who she can dine with, shop with, and marathon The Bachelor with in PJs.

That's not the end of the animated segments, though; Jules soon realizes that maintaining friendships is constant work. Much of Dollface is about Jules running into the limits of her comfort zone, which means she falls into moments of magical realism again and again. When Jules decides she should actually try to socialize with her coworkers over lunch, the table full of women begins to roll away from her, and she has to sprint to catch up. When Madison suddenly invites Jules to a fancy debut party for her client, Jules finds herself on a gameshow segment of "Should She Go Out," where she has to choose between disappointing Madison or risk her finding a new best friend.

These are all amusing and relatable moments, but in a show about friendship, you'd also hope that by the end of Dollface perhaps Jules doesn't see Cat Lady — the literal embodiment of the fear of dying alone — anymore because she has Madison, Stella, and Izzy by her side.

"You don't want me by your side," Jules tries to explain to Madison over the phone. "I don't even want me by my side. If I could attend large social events without me, I would."

It happens again when Madison and Stella begin to argue over brunch about what a post-breakup Jules really needs, and Jules looks down and realizes the ground has split open and she's hanging over a fiery pit. Jules then later finds herself testifying in a court of law for being a buzzkill when she realizes she can't keep up with the partying Stella and Madison.

For the most part, these quirky segments are fun, and they work to illustrate how interacting with women — at least those who are extroverted socialites like Madison and Stella — is outside of Jules' experiences. She leaned on her boyfriend and his friends' group for five years, and she literally doesn't know how to navigate conflicts between women, or how to be present for them while still balancing her own desires to be a sweats-wearing homebody.

On the flip side, there's also limits to these moments. Despite the show being all about supporting other women, Dollface never goes deep enough to let Jules actually talk about these visions with her friends. Are they really just fun animations, or in the true tradition of magical realism, are they signs that Jules is struggling with her mental health? The show never clarifies that, and so the segments become less powerful as time goes on.

It's a bit disappointing that the segments don't have a larger overarching point, because it seems like they would serve as a marker for whenever Jules is battling anxiety. At one point, emergency responders break into Jules' house and tell her to step into a body bag because she accidentally liked an old Instagram post on Jeremy's new girlfriend's page. Later, Cat Lady brings Jules into a hospital room and tells her she's unfortunately "caught feels" for her casual hook-up guy. These are all amusing and relatable moments, but in a show about friendship, you'd also hope that by the end of Dollface perhaps Jules doesn't see Cat Lady — the literal embodiment of the fear of dying alone — anymore because she has Madison, Stella, and Izzy by her side.

The ending of Dollface complicates that reading. As Jules heads off to be a bridesmaid in Jeremy's sister's wedding — the final test of if she's over him — Jules runs into Beth Grant, in human form, several times. After Jules does a mic drop and finally tells off the selfish Jeremy and his sister, Jules, Madison, Stella, and Izzy joyously drive off together — but then Cat Lady appears between them, and it's clear all the women can see her. But why? Wasn't seeing Beth Grant as a normal person proof that Jules was healed? I get it, Beth Grant is fantastic, but the last animated zinger seems to undermine the final message of the show.

Perhaps it was done to keep the door open for Season 2. If Dollface does get renewed, here's hoping Jules figures out how to live without Cat Lady holding her hand.