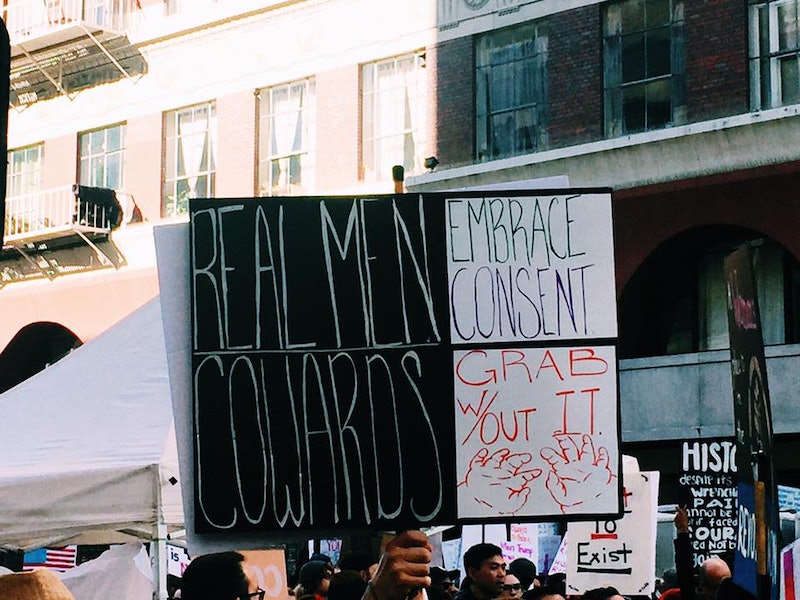 The night of the election, I called my boyfriend, devastated, hoping that he would be an anchor of support. Instead, he reprimanded me. He told me that I was in fact part of the problem. That being so focused on identity politics, including my own sexual assault, was what lost us the election. He explained that Hilary Clinton's campaign was rooted in social issues, but that people were voting with their wallets, not their hearts. The election was won by the poor white American voter who was promised their factories would be kept open, the wealthy white man who was promised his taxes would be brought down. And we, as a national community, had ignored them all.

We had this argument several times, my trying to explain that I wanted to grieve, not to debate what should have been done; him telling me that I was overreacting and that I needed to change my way of thinking.

Over the following months, our relationship took on a new shape. As a teacher, he began to wonder if private education was where he should be working in a time like this. He was riddled with insecurity about how he was impacting our future, whether he was perpetuating the cycle of inequality.

The room stopped. His friends stared. And I … laughed. Drunk, embarrassed, trying not to make a scene, to be too loud, I laughed.

Then, one night, it happened. I remember On New Years Eve, gathered in an apartment in Bushwick, my boyfriend began to mimic Donald Trump, joking about his views on women, race, and wealth. The more drunk he got, the more vulgar.

He started joking that owning property gave him a total #WhiteManBoner. Later, while talking with a friend about my Latina mother, he joked that I'm not Latina, it's just a box I check. A few sips of beer and he cascaded into airhorn screams in the voice of Donald Trump, proclaiming he hated women.

And then came that all-too-familiar line, those words that women have been strangled by for the past three months: that he could just grab me by the p*ssy. And then, he did. He grabbed me. The room stopped. His friends stared. And I … laughed. Drunk, embarrassed, trying not to make a scene, to be too loud, I laughed.

I wish I had just walked away in that moment. Over the past month, I've fantasized about the millions of Beyoncé quotes, hair-flips, and middle fingers that could have ended it right there, on the streets of Brooklyn. But I didn't. I went back home with him. I was confused. I was in shock.

It hurt deeper than any hurt I’ve ever felt, because it came from someone I trusted ... Someone who likely marched on Saturday, wearing the shield of liberalism.

When I was 18, I was sexually assaulted my freshman year of college by a fellow student in his dorm room. The event thrust me into adulthood in a way that I couldn’t quite comprehend at the time. That night, I was taught that my body didn’t belong to me — that it could be taken advantage of personally and politically. At 18, not knowing what you’re doing, maybe a little drunk, maybe too nervous to tell anyone, you can lose your voice. At 25, at a New Year’s Eve party in Brooklyn, I was reminded once again that the voice that was taken away from me at 18 still isn’t loud enough.

The 25-year-old me knew it was over that night, but that 18 year-old girl was too afraid to simply walk away. There was a part of me that thought this could all be erased, that we could blame the alcohol and a tough few months. But we couldn't. I couldn't. That was the last straw — the moment where instead of a ripple or a rift, I saw a gaping ocean of difference and indifference.

Twenty-four hours later, in one of those movie-style breakup lunches, he contested that he was making fun of the statement, not performing it. And yet, in a way, that seemed even dirtier. As former First Lady Michelle Obama said in reflection on Donald Trump, “The shameful comments about our bodies, the disrespect of our intelligence. The belief you can do anything to a woman? It is cruel. It's frightening. And the truth is, it hurts.” It hurt deeper than any hurt I’ve ever felt, because it came from someone I trusted. Someone who stood by me for years. Someone who said he was a feminist. A high school teacher who understands how history is molded, repeated, and shaped. Someone who likely marched on Saturday, wearing the shield of liberalism.

If this election has done one thing, it is that it's unearthed those quiet parts of people. Through his actions and words, President Trump has given people permission to reveal the darkest truths of their own minds. When jokes are made about grabbing a woman by her genitals, that kind of behavior suddenly becomes normalized. Even a man who identifies himself as a feminist, a liberal, and an educator acted as though he felt that my body belonged to him at some level, to prove a point. Maybe it was a moment of insecurity at his own indifference, his own falling back on the "convenient" and the "easy."

So, this is for any woman or any man who is scared. For any individual that is worried that their sexual health, their freedom to their own body, or their ability to love who they want to love. For the people who fight to wear what they want to wear, to use the bathroom, to walk the streets at night, or to feel that their lives matter. I write this for any woman who laughed it off instead of screaming. I hope that you know you’re not alone. You’ll never be alone. And that we will always grab back.