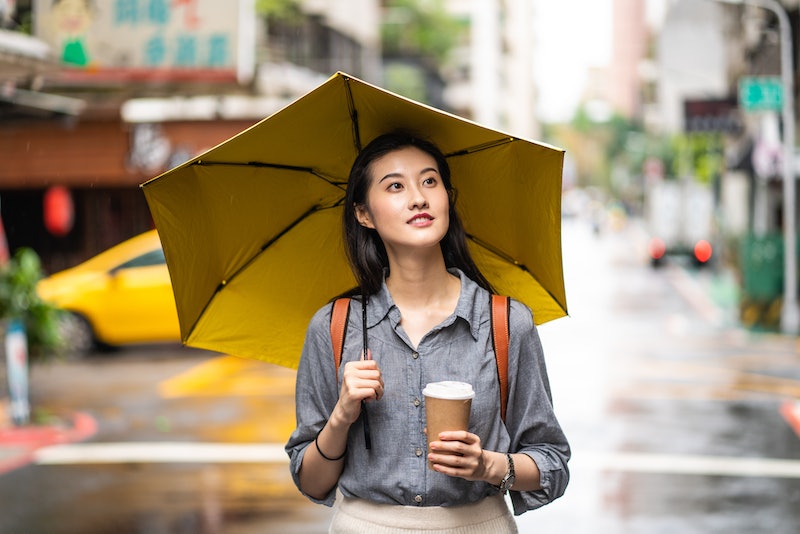 After eggnog at Christmas, mulled wine during that vortex until New Year's, and whisky while yodeling Auld Lang Syne at midnight, it can be tempting to abstain from alcohol for January as a change of pace. If you're taking the opportunity to do dry January, experts tell Bustle you may experience changes in an unexpected quarter: your gut health. Alcohol has a rapid effect on the gut when you drink, and staying away from alcohol for a month is enough time to see a significant change in its composition and health.

While a month doesn't seem like that much time, just a week without alcohol can produce significant changes. "For most people, one week without consuming alcohol may help improve your sleep, your mood, your sex life, and complexion," Dr. Joseph Volpicelli, M.D., a psychiatrist specializing in addiction therapy, tells Bustle. The gut also experiences that change quickly. Your gut's function depends a lot on its microbiome, the millions of bacteria and other living creatures that live in the gut and help digest food and perform other functions. Research has shown that the gut microbiome affects everything from our immune systems to our mental health — and that alcohol can interfere with it in many ways.

"Alcohol intake directly changes the gut microbiome and affects the intestinal barrier," Dr. Will Bulsiewicz, M.D., a gastroenterologist, tells Bustle. "Drink enough of it and you will cause severe damage to the gut microbiota, with the result potentially being alcoholic hepatitis or cirrhosis — both of which, we now understand, involve damage to the gut." A 2015 study published in Alcohol Research: Current Reviews found that excess alcohol is linked to a whole host of gut-related disorders, including problems with intestinal microbiota, inflamed gut tissue, intestines that are more permeable, and tissue damage.

For most of us, however, the most common effect of consuming alcohol is gut dysbiosis. Bulsiewicz explains that dysbiosis is a condition where the balance of our gut microbes is disturbed, with increases in the population of harmful bacteria and less of the more beneficial types. "Dysbiosis has been associated with modern diabetes, inflammatory bowel, depression, and anxiety," he tells Bustle. Lower levels of drinking might not be so bad for the gut, depending on your alcohol choice; New Scientist reported that a 2019 study showed red wine drinkers might have more diverse gut bacteria than people who drink other kinds of alcohol, for example. However, one month without alcohol can change the gut in significant ways, and research says many of the changes are positive.

The effects of Dry January depend on how much you've been drinking before you go sober, what you eat, and even your genetics. However, research on heavy drinkers shows that sobriety can change the gut significantly. Bulsiewicz tells Bustle that in a 2014 study published in PNAS, heavy drinkers showed obvious changes in their gut microbiome three weeks into sobriety. "They saw the total amount of bacteria, as well as the levels of Bifidobacteriums pp. and Lactobacilluss pp., increase significantly," he says. Both those bacteria are linked to efficient gut function. Three weeks, the study found, wasn't enough to completely fix the microbiome in heavy drinkers, but it was certainly a step in the right direction.

It's important to note that if your gut or other organs are already damaged from alcohol, one month of sobriety won't make any substantial changes, particularly if you resume drinking afterward. "If someone’s got liver scarring or fibrosis, that certainly won’t change with just a month off,” Dr. Gautam Mehta, a researcher on alcohol abstinence, told The Guardian in 2018. The effects of a month of sobriety can also be reversed pretty quickly; just one night of binge drinking can increase inflammation in the gut.

For a lot of people, though, three to four weeks of sobriety in January is definitely enough to change your gut for the better. If you've experienced symptoms of gut dysbiosis, including gas, bloating, constipation, or diarrhea, when you've been drinking, you may find that these symptoms ease over the course of a month sober. Research published in 2015 in Biomolecules also found that taking prebiotics can help reduce alcoholic dysbiosis in the gut — so if you're going sober to reduce bloating or other gut symptoms, it could also be a good idea to chat to your doctor about prebiotics. Keep an eye on your gut health over the course of Dry January; whatever's happening is intimately tied to your choice to put down the cider and pick up an herbal tea.