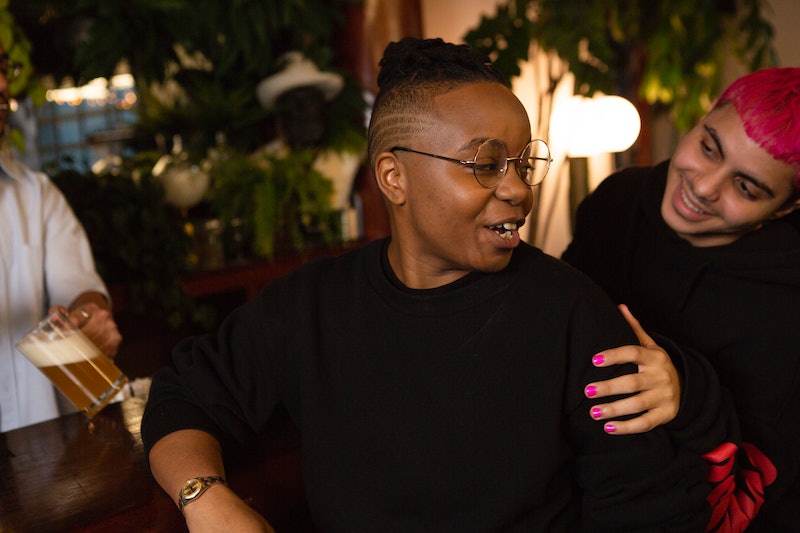 It’s that time of year again — as talk of new year’s resolutions comes up everywhere from holiday family dinners to your social media feeds, people will almost inevitably start talking about Dry January. As people hit the proverbial reset button with life at the start of the new year, Dry January is a month of abstaining from alcohol, meant to reset your body and mindset. But if you’re sober all-year-round, conversations about Dry January can be difficult.

“It can be trivializing, hearing people talk about how hard but cool it is to choose not to have alcohol for a month,” says Alex, 31, who’s been sober for just over a year. “But I don’t have a choice, and I can’t drink for much longer than a month.” Still, they tell Bustle, if you’re able to surround yourself with people year-round who support your sobriety, Dry January can be a fun way to go out with your friends while nobody’s drinking alcohol.

For people who are in recovery, Dry January might stir feelings of jealousy and resentment toward those who seem to merely be dabbling in sobriety, psychotherapist Erica Lubetkin, LMHC, tells Bustle. However, “everyone starts somewhere on their road to recovery, and it’s important to be mindful that not everyone enters recovery fully 100% motivated and committed to lifelong sobriety,” she says. “For some, Dry January is an opportunity to test the waters.”

In conjunction with professional mental health support, Lubetkin says that the popularized month can take a lot of social pressure off of people because they can say, "‘I’m trying Dry January’ versus ‘I’m sober/in recovery.’" On the flip side, if you’re trying Dry January and you’re not in recovery, it’s important to remember that your 31 days are very different than your sober friend’s. Whether you’re sober by choice or not, there are a lot of short-term effects that alcohol has on your body that might become clear during this month of abstaining. “Still,” says Lorelei Bandrovschi, founder of the once-monthly alcohol-free bar in New York City called Listen Bar, “that doesn't mean you're walking a mile in the shoes of someone who’s sober.”

This distinction is important, given that in the UK, Dry January started in 2013, two years after an employee of Alcohol Change UK, an alcohol charity, abstained from drinking in January because she was preparing to run a half-marathon in February. However, given the long-term benefits of not drinking alcohol such as maintaining the brain’s chemical pathways and getting better sleep, the focus shifted to raising awareness about how all people could benefit from learning to drink less.

According to Alcohol Change UK, a survey of Dry January participants showed that even in the middle of the year, seven of 10 people who abstained for a month “continued to drink less riskily than before.” Further, 82% of participants reported feeling more aware of their personal relationship with alcohol after completing Dry January. Being more mindful of your unique experiences with drinking is a huge benefit of the popular month of abstention, Bandrovschi tells Bustle.

If your own journey means that Dry January is hard for you to talk about, that’s OK. “Vent out your feelings (to a person you trust, or even in a journal) because expressing your feelings is necessary to find forgiveness, and do your best to find compassion for the experience of those trying Dry January,” Lubetkin tells Bustle. She also recommends unfollowing accounts posting a lot about the month and blocking the #DryJanuary tag from your social media if you’re finding it triggering.

“No two individuals are the same,” Lubetkin says, “and when it comes to recovery, no one size fits all. Dry January may not work for you but that doesn’t mean it won’t help others.” So whether you love, hate, or feel ambivalent toward Dry January, it’s important to care for yourself and your journey first and foremost, because you deserve that care and attention.