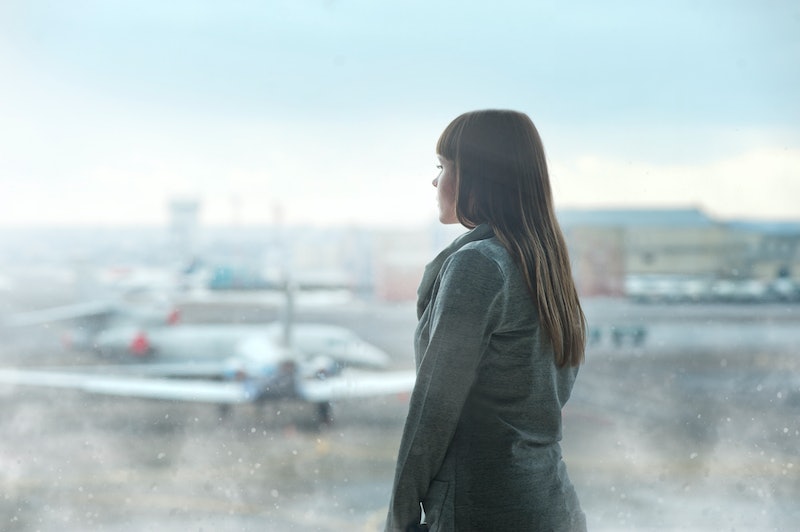 Some people are born with a natural sense of precaution and risk assessment, which translates in to an impressive travel etiquette. Well, impressive to me, because I was literally born without whatever gene allows for you to have any travel sensibility. For much of my life, I've been the kind of person who shows up at the airport about 10 minutes before my flight is boarding, and have to enlist the help of all airport personnel to help me cut in front of everyone in the security line and rush me to my gate. Occasionally, I'm that person who missed her flight because she got distracted in the food court and didn't hear the boarding announcements. Or, worse, I'm the person who slept too late and didn't even bother trying to get to the airport because her flight was boarding by the time she was brushing my teeth. Every travel mishap has happened to me. "Sorry mom and dad, I'm non-functioning and I didn't know what time to get to the airport on Thanksgiving," is something I've had to admit a few too many times.

And as I get older, my travel skills — or lack thereof — become more problematic. Missing a flight to a beach trip where no one's waiting for me is one thing, but missing a flight for a work trip or a family holiday function is another. When your parents are at the airport waiting to pick up the adult they worked so hard to raise, and you're not there because you missed your flight after you were too busy watching The Bachelor reruns (honestly, it gets even better third time around) is kind of insane. (What, like that's never happened to you?) So this year, I'm changing my ways and I'm not even waiting until New Year's to start making grandiose promises to myself!

As it turns out, airports actually offer travel suggestions on their websites. You don't have to guess what time you're supposed to be there — there's actually suggested arrival times for holiday travel, and following the advice of the airport is obviously the best way to ensure your travel plans are seamless. If you're taking a domestic flight, most airlines suggest arriving 90 minutes before your flight. But if you're traveling the Wednesday before or the Sunday after the holiday, you should actually arrive two full hours before your flight, as those days are the busiest. On one of the busiest travel weeks of the entire year — AAA reported that in 2016 48.7 million people traveled 50 miles or more on Thanksgiving — it's important to take those pre-flight precautions seriously. So here are some tips to make sure that you get to the airport at the right time this Thanksgiving:

The Wednesday before Thanksgiving and the Sunday after Thanksgiving are the most popular dates to fly, obviously, because they coincide with most work schedules. To avoid mayhem, consider flying in and out Tuesday night and Saturday morning, respectively, if it's possible. Mix and match options to great a less stressful travel itinerary for yourself.

Roll, squeeze, cramp, do whatever you have to do to make sure that you don't need to check a bag. Traveling light will make your entire travel experience easier. The last thing you want to deal with is checking a bag when you're running late, and waiting for baggage claim when you want to get home.

No matter what time you leave the house, there will be traffic — and if it's raining, there will be more. Leave way earlier than you ever leave for the airport. Getting there early isn't so bad: Bring a book, download some movies, and just relax instead of stressing out in the back seat of a cab that's stuck in gridlock traffic.

Be Prepared For Chaos

Bring a snack, bring a pillow, and practice patience. Your flight might be delayed, overbooked, or cancelled. On popular travel days you should always expect chaos to break out. Try to be flexible and have a good attitude about it. If you're able to give up your seat for an overbooked flight in exchange for a voucher (and these can sometimes be worth a lot), go for it if your plans allow. There's always a silver lining if you look for it.