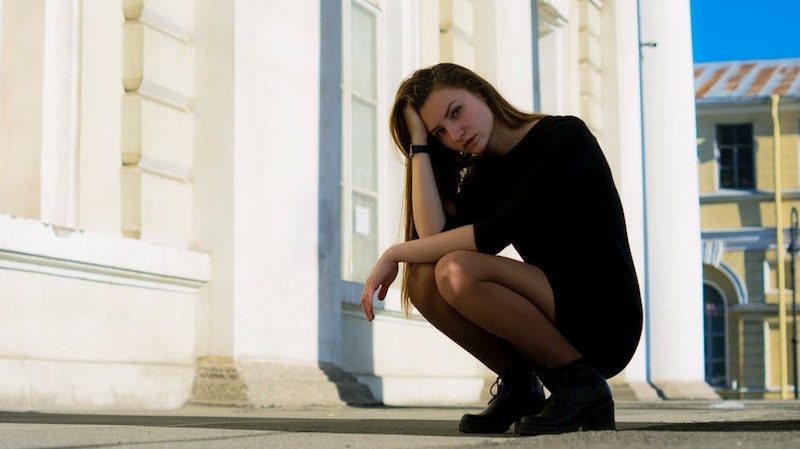 IvanObolensky/Pexels
By Georgina Lawton
May 9, 2017

One thing's for certain: Money worries are common for Millennials. From student loans to the rising cost of living, it's safe to say that as a generation, we definitely don't have it made. But have you ever stopped to wonder how economic woes can impact your mental health? Because a new study from the University of Cambridge shows that there is a clear link — and really, if you stop and think about it, it's no wonder our finances can negatively impact our psyche.

Millennials are often accused of being more irresponsible with their money than previous generational cohorts. But there's actually little evidence to support this theory; indeed, some studies suggest we're actually better with it than our parents. What's preventing us from saving and investing is actually the fact that we live in a very different (and more difficult) set of global economic conditions — that is, circumstances well outside our own control — rather than a simple case of bad habits. Studies show that Millennials around the world have seen average wages drop over the past 20 years as student debt has steadily mounted. Interest rates have also plummeted worldwide since the 1970s and '80s, and the gap between the average house price and the average wage is growing ever wider, forcing many young adults to continue living at home. As a result, many Millennials are living paycheck to paycheck — women in particular. Indeed, a recent study of 1000 Millennial women by Bustle revealed that 28 percent of us feel stressed about money literally all the time.

So how does all this despondent-sounding financial news impact the collective Millennial mind? Unsurprisingly, not well. And if you're a woman, it's even more bleak. The latest comprehensive study into the link between gender and money stress found that struggling with money is far more likely to cause anxiety in women than in men. (Surprise.)

The study, conducted by researchers at the Cambridge Institute of Public Health and published in the The British Medical Journal, analyzed survey results from questionnaires related to diet, lifestyle and health completed by 21,000 people in and around Norwich, England, between 1993 and 2000. The researchers found that women living in lower income areas are more than 60 percent more likely to experience anxiety than women inhabiting wealthier areas. However — and here's the really interesting part — men’s anxiety levels were hardly affected at all by where they lived.

Although the researchers could not draw a firm connection between economic woes and increased anxiety in women, Cambridge Institute of Public Health professor Carol Brayne noted in a press release, “Anxiety disorders affect a substantial number of people and can lead to poor health outcomes and risk of suicide. Now we know that women are particularly affected by deprivation, while men less so. This is intriguing and further research is needed on this, particularly in the most deprived regions.”

What's the affect of all this stress? As anyone who's suffered from an anxiety disorders will know, it can very easily take over your life, preventing you from enjoying work, socializing, and relationships. Study author Olivia Remes, PhD candidate at the Department of Public Health and Primary Care, also noted in a press release that it can increase "the risk of depression, substance misuse and serious medical conditions." She added, "We see from our study that women who live in deprived areas not only have to cope with the effects of living in poverty, but are also much more susceptible to anxiety than their peers."

This study is dispiriting, but unfortunately, it's not the first of its kind to suggest that Millennials stress a lot about money; it's not even the first to suggest that it's usually women who are affected disproportionately. Overall in the United States, money — and the worry of running out of it — is almost always on the mind. A 2014 report from the American Psychological Association poll found that financial worries were a significant source of stress for 64 percent of adults, ranking higher than work, health concerns, and family responsibilities. And although almost 75 percent of adults said they felt stressed about money at least some of the time, it was women who are more likely than men to state financial concerns as a serious source of stress — to the tune of 68 percent, versus 61 percent, reported CBS News. 51 percent of the women surveyed also reported lying awake at night due to money stress in the month before being surveyed. What's more, a 2006 study from insurance company AXA estimated that women are twice as likely to suffer from loss of sex drive as a result of money worries than men are. Yikes.

It's already well known women are more likely to suffer from anxiety and stress than men; a 2013 study from the University of Oxford suggested that it comes down to a combination of sociological and biological factors, including a perceived lower sense of worth and the fact that more women suffer more from depression and sleep problems (both of which can be connected to anxiety). But all this research proving that women worry more about money than men also suggests that we shoulder the largest burden of societal ills. The Cambridge study showed than an "anxiety gap" related to wealth is very much in existence, just like the much-written-about gender pay gap. And recent news also proved that working women are penalized more harshly for choosing to have kids than working men are, highlighting the existence of a "motherhood penalty" — and no male equivalent.

With it not looking likely that a global re-structuring of the capitalist patriarch is going to happen any time soon, all we can do is continue to educate ourselves about our finances, protect ourselves as much as we can against potential economic setbacks, and seek help if and when it starts to stress us out.