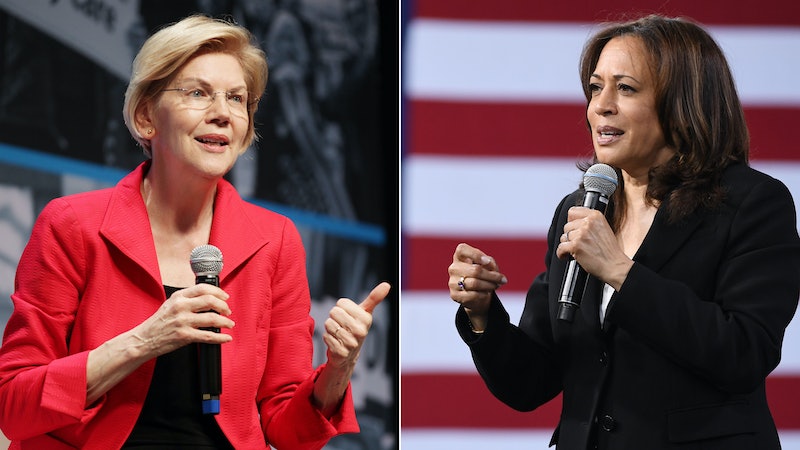 In this op-ed, Nancy L. Cohen, an award-winning author, historian, and leading national expert on the intersection of gender and American politics, explains how during the Democratic debates, Elizabeth Warren and Kamala Harris can keep their momentum going.

For this week’s Democratic presidential debates, CNN staged an on-air lottery for placement, and Sen. Elizabeth Warren and Sen. Kamala Harris won the jackpot. Warren finally gets a head-to-head against Sen. Bernie Sanders, while Harris gets a rematch, plus reinforcements, against former Vice President Joe Biden.

The debates will give the two senators an important opportunity to cement their status in the top tier of the 25-person Democratic field. A new USC Dornsife/Los Angeles Times poll shows that half of likely voters have changed their candidate preference since April, and a quarter of voters remain undecided. With a strong performance this week, Warren and Harris can build on this momentum to grow their support.

On Tuesday, Warren will be standing center stage next to Sanders, her main competitor for the most progressive Democratic voters. Warren has been rising in the polls for months, according to the Real Clear Politics polling average, while Sanders has been slowly bleeding support. It will be the first time voters get to see a direct contrast between the top two progressive candidates: Warren, the woman with a plan, and Sanders, the man promising a political revolution.

Progressives want Warren and Sanders to treat each other gingerly and focus their fire on the moderates. Strategically, that would be foolish for Warren. And Warren’s no fool.

Without siphoning off a significant chunk of Sanders’ supporters on the left, Warren has little hope of a first or second place finish in Iowa and New Hampshire, which are both essential to her winning the Democratic nomination.

Warren has become a master of wrapping her sophisticated progressive policy in folksy stories, populist heartland rhetoric, and personal narrative. It’s appealing, plus she offers a road map to the progressive future. Moreover, her nuanced case for a market with rules, for a regulated capitalism, is arguably more in tune with the broader electorate in the Democratic party and beyond.

Warren, unlike Sanders, has potential appeal beyond the left. She needs to use the debate to build this broader coalition. This is her moment to make her appeal particularly to women, a key demographic in the Democratic primary and critical in the general election. She should lean in to her detailed plans for child care, equal pay, and preserving abortion rights, all of which make Sanders’ rhetoric and vague promises on women’s rights sound like empty words.

There's another reason Warren should take on Sanders that actually has nothing to do with him. Warren must prove she can take on a bombastic elderly white man on style, not just substance. Her approach to Sanders will give us clues about how she intends to take down Trump. With voters obsessed with electability, it would be risky for Warren to go another round without showing her fighting moves.

After all, it was Harris’ debate performance last month that catapulted her into the top tier of candidates. By taking on Biden, she showed she could go toe-to-toe with Trump. In other moments, as when she won audience cheers by putting a stop to the onstage bickering, Harris played the role of anti-Trump. She demonstrated leadership and gravitas, qualities Democrats crave. Harris stood head and shoulders above the sea of man-terrupters flanking her on the stage.

As voters could literally visualize Harris on stage with Trump, her support rose dramatically. Yet in a pattern frequently seen when a challenger surges against the front-runner after a strong debate performance, Biden is recovering lost ground and Harris has slipped a bit from her peak.

It might seem counterintuitive, but a rematch against Biden is exactly what Harris needs to keep her momentum going. After all, you don’t take down a man who’s been running for president for 30 years in just one round. Wednesday night’s debate gives Harris the opportunity to prove not only that she is unafraid to continue to prosecute the case against Biden, but also that she has the range to beat Trump. We need to see that June’s debate wasn’t a one-off.

To keep her momentum going Harris must continue to chip away at Biden’s biggest strength: the perception that he is the most electable Democrat. To do this, she must show she has some new moves. Her release Monday of a detailed "Medicare for All" plan suggests she’s willing to have the policy debate on a wide range of issues.

Yet this week’s debate also presents some risk. On the one hand, Harris picked up reinforcements against Biden. Sen. Cory Booker, who also will be flanking Biden on stage, has gone after Biden as “the proud architect of a failed” criminal justice system that has led to the mass incarceration of African Americans. But will Booker’s fusillade against Biden go wide and wound Harris, the former prosecutor? She must be prepared to defend herself with more than the talking points she’s relied on to date. Last week’s rollout of a progressive bill to decriminalize marijuana use and direct tax revenues to assist people previously convicted indicates she’s ready for that fight.

The upcoming debates provide a tremendous opportunity for Harris and Warren. If they can successfully take on Biden and Sanders, that’ll go a long way in demonstrating that they have a real shot at beating Trump. Come the next round of debates, we may be watching a narrowed field where these two women are the strongest candidates.