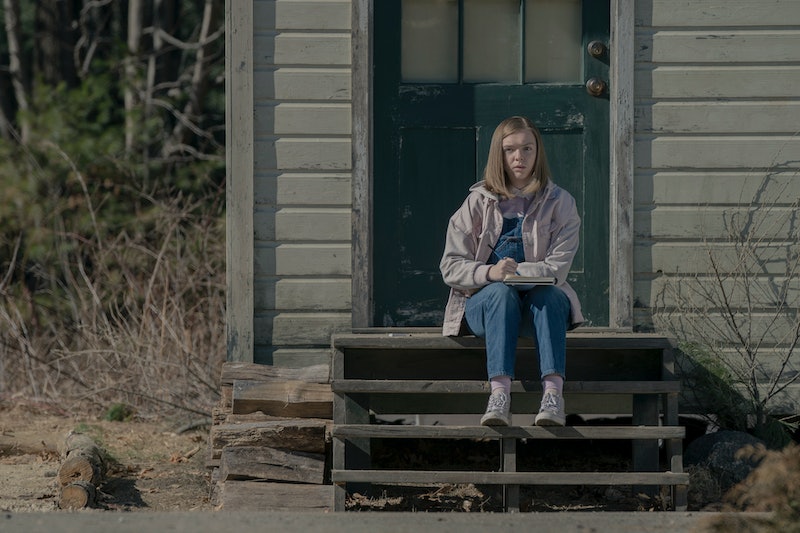 Castle Rock's second season re-introduces Annie Wilkes, the infamous villain from Stephen King's Misery novel. She's younger than the version of her in both the 1987 book and the 1990 movie based on it, but that's not the most significant change. In the show, she also has a daughter named Joy — played by Elsie Fisher of Eighth Grade fame — who Annie will do anything to protect.

In the book, Annie is an unhinged, older nurse who "rescues" her favorite author Paul Sheldon from a car crash and then imprisons and cripples him in her home until he gives her what she wants: a new ending for her favorite character from his novels. Being obsessive is a hallmark of Annie's character, and the same is true in Castle Rock. However, rather than fixating on a novelist, Annie's world in the show revolves around keeping Joy safe. The mother-daughter pair lead a nomadic life, and after a late night car accident strands the two in Castle Rock, they get dragged into a culture clash brewing between Castle Rock and the adjacent town, the infamous Jerusalem's Lot from Pet Sematary.

As in Season 1, this lends itself to a mysterious premise built upon dark and unexpected twists, but it's Joy who serves as the emotional anchor of the story. She may not make Annie completely sympathetic, but she certainly makes the infamous villain more three-dimensional.

"Annie believes, to her core, that she is doing everything right and that she is the hero and that everything she does is to protect her daughter," Lizzie Caplan, who plays Annie, told Variety. "Annie striving for sanity and control is all down to wanting to be the person that Joy can rely on." Unlike in Misery, this Annie attempts to self-medicate and at least manage some of her various mental health issues — psychosis, most notably — in order to be more present for Joy.

However, conflict arises when the pair land in Castle Rock and Annie is confronted with the fact that Joy is getting older, and despite loving her mom, is still a normal teen in need of some independence.

"This is pretty much the moment where Joy is starting to spread her wings and wants to experience life without her mother," Caplan continued. "Up until this point it was easier for Annie because she was very much Joy's entire universe."

If you take away the supernatural aspects of the story, Fischer sees the drama that Annie and Joy undergo as very realistic. "I think Joy and her mom have a lot of normal changes that happen in any mother/daughter relationship because you know, Joy's going through puberty, she's being a teen, being a rebel," Fisher told Bustle at New York Comic-Con. "I think that is just amplified in some ways by Annie's mental state and what she deals with. But you know, there's ups and downs, highs and lows in any relationship. So I think that just applies to theirs. It's just in the worst circumstances possible."

Annie Wilkes is certainly a difficult character to humanize, but it's clear that if any character is going to make Annie someone to root for, it's going to be Joy.

"I feel like she has an innocence about her you don't see in a lot of Stephen King characters," Fisher told the New York Post. "I think the beauty of my character is she's a normal teenager. It kind of shows how the town itself can mess people up."

Annie loomed as a larger-than-life antagonist in her own novel, so it will be interesting to see her and Joy pitted against even bigger villains, and if Jerusalem's Lot is anything to go by, the undead. We'll also likely need to cross our fingers for Joy: the fact that later in life Annie lives in total isolation and lets her psychosis spiral out of control perhaps doesn't bode well for Joy's fate. Does Joy abandon her mother, and that's why Annie eventually becomes the Annie of Misery? Or will Joy meet her grim demise in Castle Rock Season 2? Only time will tell.

More like this
Everything To Know About 'And Just Like That...' Season 2
By Jack Irvin and Grace Wehniainen
These Brooke Davis Quotes From 'One Tree Hill' Will Never Get Old
By Sabienna Bowman and Jack Irvin
'The Last Of Us' Episode Schedule Competes With The Super Bowl & Oscars
By Brad Witter
Grammys Host Trevor Noah Made Adele's Dream Of Meeting The Rock Come True
By Brad Witter
Get Even More From Bustle — Sign Up For The Newsletter
From hair trends to relationship advice, our daily newsletter has everything you need to sound like a person who’s on TikTok, even if you aren’t.