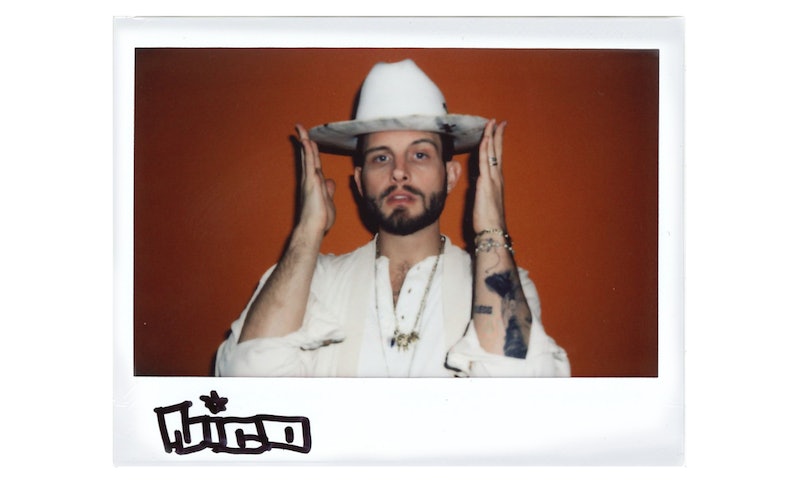 When celebrities hang out with Bustle editors, we want to give them the chance to leave their mark. Literally. So we hand them a pen, a piece of paper, a few questions, and ask them to get creative. The rest is up to them. This time, How Far Is Tattoo Far host and Younger star Nico Tortorella is leaving a mark in the Bustle Booth.

MTV's How Far Is Tattoo Far (which airs Thursdays at 9 p.m. on MTV) has a fairly simple albeit daring premise: Two friends get to pick tattoos for each other, and they cannot be refused or changed. At the end of the show, each has a tattoo, and, well, they have to live with it. It's simultaneously silly and serious, and that was clearly a draw for host Nico Tortorella.

“Tattoo culture is something that is near and dear to me,” Tortorella tells Bustle. “And there was something about the dynamic [of] the people that come onto the show and the experience of it that was enticing.” Along with Jersey Shore's Nicole “Snooki” Polizzi, Tortorella acts as a part-time host, part-time therapist on the show, because a lot of the participants have some sort of personal quarrel with each other, which often leads to some very interesting tattoo results.

“People are coming on and doing things to each other in a way that is so much more multi-dimensional than I ever even realized just watching the show,” they say (Tortorella identifies as gender-fluid and uses they/them/their as pronouns). “People are talking about things, bringing stories and circumstances to life that they can’t for whatever reason do outside of this controlled environment. And it’s fascinating. Some for the better, some for the worse.” And those very personal moments of breakthrough How Far Is Tattoo Far offers? Tortorella feeds off them.

“I have like very personal moments in my life all of the time. I’m not one for small talk — if I’m having a talk with somebody, I’m going in from the get-go,” they say. Though they are an actor, Tortorella relishes the personal connection a host can have with an audience. “There’s something to be said about playing yourself on television,” the LGBTQ activist says. “The ability to play myself unapologetically, unconditionally, is like, the most exciting thing to me right now… I’m really enjoying it and I want to do more of it for bigger causes and greater effect.”

Tortorella certainly has many avenues to pursue this. They recently guest-taught a lecture at Yale and could see more teaching opportunities in their future. Or Tortorella could end up talking about far more serious topics than tattoos on our TV screens. “CNN is on in my house 24 hours a day for the most part,” they say. “There’s nobody on the network that represents my generation. The outskirts of the community that I fight for. Is there a world where I could see myself working in a space like that? Real work? Yeah, I would love that.”

Tortorella wants to break free of the “trauma-based” media cycle in favor of celebrating the good that’s going on in the world. “What Fred Rogers did on [Mister Roger’s Neighborhood] is unprecedented. Nobody treated the medium of television more importantly than he did,” they say. “And somebody needs to be taking that responsibility. That could be me, I don’t know.” Tortorella says they could be a combination of Anthony Bourdain and Fred Rogers, traveling around the world and making a television show about good people.

As for Tortorella’s non-hypothetical television roles, sorry, Younger fans — they know as much as you know about Josh and where he will go from the earth-shattering realization at the end of Season 5 that Josh’s ex-wife, Clare, is pregnant. “I know absolutely not a single thing past what everybody else knows. Is the baby mine? Unclear,” they say. “Is she gonna be back for the next season? Unclear. I have no idea. I’m here for the ride.”

Many Younger fans never jumped on the Josh-and-Clare ‘ship and were happy that Clare didn’t have much of a role in Season 5. The reason, though, was more contractual and less about fan outcry. “The tea with Clare is that she was supposed to be on the whole of last season, but she was on another TV show, and like two weeks before we started filming, they wouldn’t release her,” Tortorella says. “So they had to rewrite my storyline for last season, which is why I wasn’t in a whole lot of the show.” They went onto say that Josh should focus a little more on what’s inside and a little less on finding a new romantic relationship, and there are scores of Younger fans who would agree with them. “Once he realizes that the only person who can fill that hole is himself, I think things will change for him,” Tortorella explains.

Unlike Josh, though, Tortorella has a heart that’s full — of love for everyone around them. “[Keeping] it light-hearted and love-based is really important to me,” they say. From playing a straight white man on Younger to simply playing himself, Tortorella is ready to teach and be taught in return.

More like this
In 'The White Lotus,' Leo Woodall Gets His Moment
By Gabrielle Bondi
'Wakanda Forever' Is Already Opening Doors For Mabel Cadena
By Grace Wehniainen
Bustle Newsletter: November 18, 2022
By Bustle Editors
Kit Connor Speaks Out On “Shocking” Lack Of Bisexual Representation
By Sam Ramsden
Get Even More From Bustle — Sign Up For The Newsletter