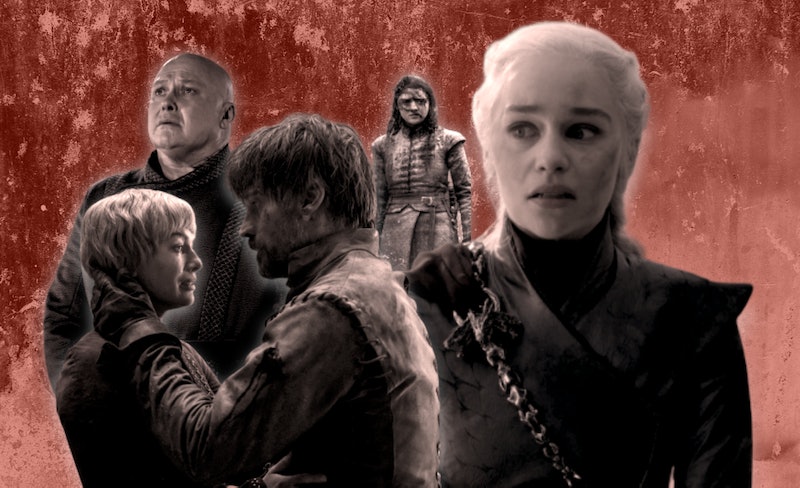 The vicious battle for the Iron Throne on Game of Thrones led to a truly confounding penultimate episode. As expected, Daenerys went full Mad Queen on King’s Landing, setting the capital aflame with dragon fire. Innocent civilians were burned, as were a largely ineffective Iron Fleet and the Golden Company. Amid all this carnage, Tyrion, Jon Snow, and Arya looked around at the rubble in disbelief, wondering when it all got so out of hand. I suspect viewers who first fell in love with the show, and committed readers of the George R. R. Martin book series in particular, are wondering the same.

Ever since the story of the television series surpassed the writing speed of Martin’s books, Game of Thrones has been plagued by plot holes and pacing issues. Some characters disappeared without a trace, while others remained onscreen with little to do as the show began to center itself on the fated connection between Jon Snow and Daenerys Targaryen. But in Season 8, creators David Benioff and D. B. Weiss have made the most ill-advised mistake of all: They've ignored the very founding principles of the books, and by extension, those of their own show. The result is a season that completely butchers the character development that had kept viewers invested for so long.

Character development is central to Martin’s storytelling. It is what distinguishes him from his greatest inspiration, J. R. R. Tolkien. Where Tolkien’s The Lord of The Rings was the ultimate battle between good and evil, Martin’s Game of Thrones did not choose moral absolutism for its characters. Instead, characters considered evil and ruthless could have redeeming qualities and grow from stereotypical, stock images. By giving key players like Sansa, Tyrion, Bran, Jaime, Cersei, Arya, Jon, and Daenerys chapters in first person, Martin was able to help readers understand the motivations behind their actions.

Cersei Lannister, for example, could be shrewd, but it was a shrewdness shaped by the misogyny of Westeros. She was still a mother who loved her children deeply. Jaime Lannister may have pushed a young boy from a tower at the start of the series, but he grew to be a man with a conscience — penultimate Game of Thrones episode notwithstanding. Daenerys Targaryen may have once been a victim, but she too could be seduced by power to madness. Martin always allowed for his stories to be shaped through his characters and their actions, which explains why the plot takes central characters on divergent paths.

For the first four seasons, the show was loved for its commitment to Martin’s vision. Viewers could both hate and then love and root for morally ambiguous heroes. But going off the books changed all that: Seasons 5 and 6 were hit-or-miss, while the abbreviated Seasons 7 and 8 have completely abandoned Martin’s patience with his characters in favor of wrapping up the plot. The characters may be doing exactly what Martin told Benioff and Weiss he has planned for them by the end of his not-yet-completed book series — it's pretty clear Dany was meant to burn King's Landing all along, for example — but the show whiffed on the emotional justification for that and many of its big moments, from Arya's sudden choice not to kill Cersei after years of build-up to Jaime's abrupt declaration that he doesn't care about the common people despite the fact that he saved them all from the last Mad King at great personal cost.

Yes, it's not entirely the fault of the creators alone, especially when they have no books to work with. For HBO, Game of Thrones has been a consistent hit, and they must keep up with the yearly deadlines of new seasons. But no excuse can be made for a sped-up Season 8 that rushes to deliver a finale without the effort of actually building its characters toward it. Viewers were already unhappy with how the Battle of Winterfell neatly resolved the threat of the White Walkers in one convenient episode, nullifying all the seven seasons of buildup. But in "The Bells," the show officially burned down the motivations of its most important characters, reducing them to the kind of one-dimensional cardboard cutouts that the books and the show's early seasons gained acclaim by defying.

There were plenty of indications that madness would someday consume Daenerys Targaryen. The genius of Martin’s storytelling was to give us a character, a survivor gaining strength against all odds, and slowly turn her into the story’s most untamable figurehead. Viewers expected madness from Daenerys, but they also know her as a woman who is kind, who responds to suffering, who controls her worst instincts for the betterment of the people. In "The Bells," Daenerys is undoubtedly moved by a righteous quest for vengeance. To turn this anger into all-consuming rage needed a simmering, gradual character development. But despite having won the battle for the throne, Daenerys launches into an uncharacteristic attack, burning the entire city of King’s Landing and its people with it. This happens literally two episodes after Daenerys sacrificed everything to protect humanity from the Night King.

Similarly, Jaime Lannister, a character who grew to assert himself away from the evilness of his twin, who left his sister to save humanity in the Battle of Winterfell, returns to King’s Landing not to kill his sister, as fans hoped, but to rescue her and die with her. The immediate switch didn’t bode well with fans of the character. And Cersei, arguably the show’s most fascinating villain who fans loved to hate, was reduced to a one-note antagonist brooding by windows who was punished with death in the arms of her lover. As for Tyrion and Varys, two men whose most famed characteristic is their wit, they have never made dumber decisions.

The show’s creators have said that Martin told them how the story ends. And it’s obvious that the ending they have planned is similar to the one Martin has etched out in his notebook somewhere. But it’s the lead-up to this ending that has fans rightfully fuming. In speeding up the final season and crunching it into six albeit longer episodes, all the subtlety of character changes has been lost. The show didn't care to explore the inner psyche of Daenerys as she burnt the city, and this has nothing to do with the spectacular performance by Emilia Clarke. The creators have reduced the show’s most formidable yet flawed heroine to a woman on rampage; a sexist stereotype.

Fans of the books and the show had been waiting for a delicious series finale. One that reveals all the intricacies of the battle, the manipulative politics, and the character ends that were so desired. George R. R. Martin once said that the Game of Thrones ending would be “bittersweet,” but for fans, this season is all set to end on a bitter note.

More like this
Nicola Coughlan Shared A Lady Whistledown Excerpt From ‘Bridgerton’ Season 3
By Grace Wehniainen, Alyssa Lapid and Sam Ramsden
Viserys’ Fate On 'House Of The Dragon' Could Differ From The Book In This Surprising Way
By Grace Wehniainen
Alicent's Green Dress In 'House Of The Dragon' May Be An Act Of War
By Kadin Burnett
You’ll Definitely Recognise Both Of Ty Tennant’s Parents
By Maxine Harrison
Get Even More From Bustle — Sign Up For The Newsletter