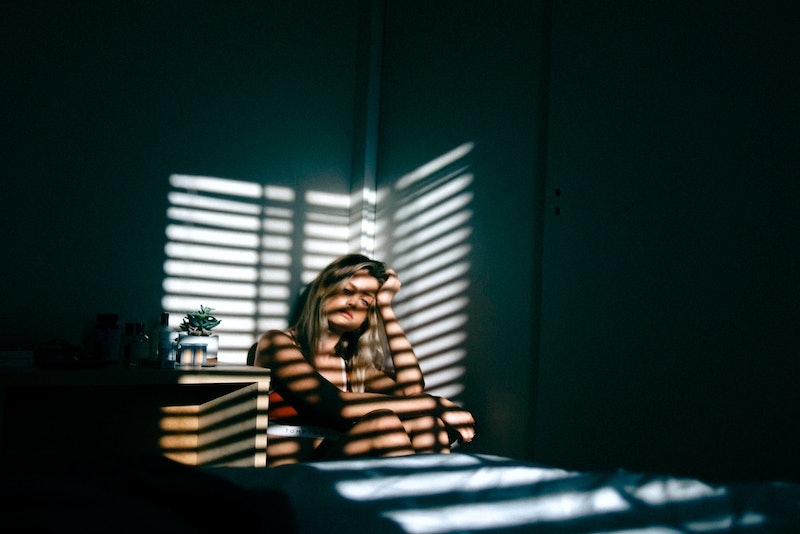 Photo by Xavier Sotomayor on Unsplash

2017 was jam-packed with newsworthy events, from the travel ban to the escalating North Korea threat, and it may be these dramatic episodes that first come to mind as you reflect on the year. But don't forget to meditate on a destructive psychological phenomena that the country has faced throughout 2017: the gaslighting of America. The U.S. has been exposed to a barrage of terrifying news, but it's also been subjected to mental manipulation. And that is starting to feel more and more normal.

"Gaslighting" someone is manipulating them to feel like they've lost their grip on reality. The term is often used in a feminist context because it comes from the 1944 film Gaslight, in which Charles Boyer's character tries to convince his wife (played by Ingrid Bergman) that she's losing sight of reality by making strange things happen around the house — like gas lights flickering at random — and telling her that she's imagining it.

The term "gaslighting" doesn't always describe a scenario in which someone is made to feel that they have a mental disability, though. It is often used when someone is encouraged to feel that they did not experience something "correctly" or to think the things that they know to be true are actually false. This, too, can make a person mistrust their understanding of reality. Lying is gaslighting, for example, when the truth is self-evident or extremely easy to access.

Which brings us to 2017. The Trump administration is bad at most things, but it's very good at gaslighting, and it's been psychologically manipulating the American public since Trump's second day in the White House. Remember when he lied about the size of the crowd at his inauguration? I'll bet you do, because it seemed like a significant story at the time (now, of course, it's among the most innocuous lies he's told this year).

It's an excellent example of gaslighting: "The audience was the biggest ever," Trump said, and then-press secretary Sean Spicer made the especially brazen statement: "This was the largest audience to ever witness an inauguration, period." Yet we saw photos like these, which compare the crowd at his inauguration with Barack Obama's. They were both taken 45 minutes before the swearing-in.

Despite being able to see the truth with their own eyes, Trump and Spicer told Americans that the truth wasn't real. When the administration denies these facts, it shakes up the foundation of reality.

2017 has been full of this type of overt lie from the Trump administration. The president said the first travel ban had a "smooth rollout" when it was widely and obviously chaotic, with over 100 people detained at airports across the country. Trump tweeted, "I don’t know and/or have never met" the women who accused him of sexual assault (Trump denies the allegations), but some performed in pageants that he oversaw, some were guests on his show, and some appear in photos with him.

One of the most egregious recent examples of the White House's gaslighting is the president's attempt to walk back the Access Hollywood tape scandal. The country remembers the "grab 'em by the pussy" bombshell — it was only a year ago, and was one of the most memorable events of the highly-scrutinized 2016 campaign — and it also remembers Trump's admission of guilt. He confirmed that the voice on the tape was him back when it was released in Oct. 2016.

But multiple outlets have reported that Trump has told people this year that it is not his voice and that the footage is fake. He seems to be trying to make those people think that they are misremembering the scandal — in other words, that they can't trust their own recollection of events.

In this case, the president's gaslighting and manipulation has been so flagrant that Billy Bush, who appears on the Access Hollywood tape with Trump, actually wrote an op-ed for The New York Times to remind everybody that "of course he said it." Bush declared, "President Trump is currently indulging in some revisionist history."

That brings us to another reason why 2017 was a notable year for gaslighting: the common labeling of credible news sources as "fake news." Trump started this trend at the end of 2016; then it caught on and flourished this year.

The term had been used to describe the literally fake news that was shared on social media platforms like Facebook during the presidential campaign (false stories sponsored by Russia, for example, may have reached 70 million Americans). But Trump popularized a different usage of "fake news" beginning with his Dec. 10, 2016 tweet: "Reports by @CNN that I will be working on The Apprentice during my Presidency, even part time, are ridiculous & untrue - FAKE NEWS!"

By spreading the idea that the mainstream media is "fake," he's encouraging the perception that it is purposefully trying to spread lies. But the job of the media is to tell the truth. The public relies on these outlets for information about what's going on in the world, and that information forms the basis of their ideas and viewpoints. When Trump tells people that the mainstream media is fake, they're being gaslighted.

And 2017 has included countless instances of people discrediting women who came forward to share their stories of sexual assault. Republican Senate candidate Roy Moore flatly denied the accusations that he had molested women when they were in their teens. Harvey Weinstein admits to some sexual misconduct, but rejects "any allegations of nonconsensual sex." And Democratic Sen. Al Franken responded to accusations by saying, in his resignation speech, "Some of the allegations against me are simply not true. Others I remember very differently."

Gaslighting tells people that their lived experiences are incorrect. It discourages victims from speaking about their experiences of sexual assault, and it can make them internalize the idea that their assaulter did nothing wrong — or even that they themselves did something wrong. "Looking back," said Weinstein accuser Tomi-Ann Roberts, "I guess I really thought that it was kind of my fault, that I was prudish or I was scared."

It's true that #MeToo has helped spread the idea that women deserve to be believed. But unfortunately, it's still the norm to tell female victims of sexual assault that they are wrong about what happened to them.

Our cultural climate — though it seems to be shifting in favor of trusting survivors' stories — is still defined by skepticism. Instead of focusing on the victims who have not gotten justice (in particular, women who are not celebrities and don't have the same resources and support networks to be able to risk speaking out), too many people are focused on ensuring that the #MeToo movement doesn't swing in the direction of being unfair to the accused.

The past year was full of obvious lies from the Trump administration, claims that the trustworthy media was "fake news," and people discrediting stories that emerged from #MeToo. All of these situations were examples of gaslighting, and there are signs that it's already worked to disorient the country. We were horrified when Trump lied about his inauguration crowd in January, but when he recently lied that the GOP tax plan would "cost me a fortune" (when it could save him and his family $1 billion), people barely blinked.

In 2018, the country needs to stay alert. Critical thinking and a healthy dose of skepticism is good — but it should never become the norm to question basic facts and the things we know to be true.

More like this
Iran Has Issued A Death Sentence Over Mahsa Amini Protests
By Catharina Cheung, Darshita Goyal and Maxine Harrison
Wander + Ivy Single-Serve Wines Are Prefect For Moms — & They’re *So* Giftable
By Kate Miller
MOBO Awards Found Kanya King On The Woman Whose Grit & Determination Spur Her On
By Kanya King
Amanda Gorman Shared A Powerful Message On Meghan Markle’s Penultimate Podcast
By Darshita Goyal
Get Even More From Bustle — Sign Up For The Newsletter