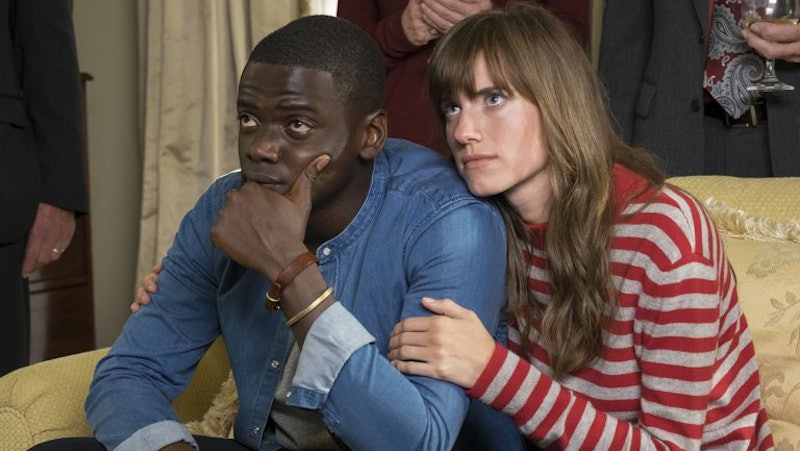 She may not be able to relate to being in the "sunken place," but the revealing metaphor that represents how institutional racism has silenced and marginalized minorities, is a concept that Get Out star Allison Williams has spent time dissecting even after the cameras stopped rolling. In a phone interview with Bustle, the 29-year-old says working on the critically acclaimed horror film — which is now out on Blu-ray and DVD — was a "high point" with regard to her growing knowledge of race relations in America. "I'm a white girl from Connecticut," she says. "I only have things to learn about and listen to."

As the seemingly innocent, WASP-y Rose Armitage, Williams shocked audiences with her bold and terrifying performance of a doting girlfriend turned crazed body snatcher. While her black boyfriend, Chris Washington, desperately tries to escape her family's clutches, Rose's pivot from pleasant to petrifying served as a critique on the racist undertones that taint American society.

Williams says that despite being taught to have a "thorough understanding" of America's history of racism, she's also aware that there's a lot about the black experience that she hasn't been exposed to. She poignantly notes that while white people haven't endured societal pressure to have to understand minorities, people of color have had to "work really hard to be fluent in the white cultural sensitivities."

Williams says, "One of the things I feel very strongly about is the limit of empathy as it pertains to actually imagining what it would be like to be pretty consistently the minority in a room or at a party or in an environment. There’s so many things I gleaned just from the conversations we had around shooting the movie. I feel like I’ve learned a lot since it came out."

Fortunately, Get Out doesn't let white viewers escape discussions about race too easily. Williams says moviegoers who "maybe haven't thought twice" about the micro- and macro-aggressions Chris experiences in Get Out are forced to confront them in a provocative and dynamic way. She says,

"They see Get Out, they realize there’s certain jokes they don’t understand or references they don’t get, and they seek to learn more about it, and they want to understand. I think that impulse is amazing. I feel really lucky that I was raised in an environment where I was encouraged to have that impulse from an early age. It's not an impulse that’s ever stopped. If anything, it just gets stronger and stronger with time."

The actor says she's encouraged by those who seek to step into Chris' shoes. Although Get Out accomplished its goal of scaring and provoking audiences into openly speaking about race, Williams says her work to understand America's fractured society has only just begun. She now is seeking out more roles that will stimulate audiences as triumphantly as Get Out did.

"We're out of time. We're overdue," she says. "We don't have time to tiptoe around these topics anymore, which is what I loved about the bluntness of Get Out. It communicated to this audience, if there are things that you don’t get, there are ways to figure it out."

Williams' unforgettable performance serves as an example for actors and audiences alike that introspection and an open dialogue are imperative to personal growth. For her, addressing race continues to feed her desire to educate herself on people and cultures outside of her own.

"One is never finished learning," Williams says. And with a hit film under her belt, she has a lifetime ahead of her to show audiences everything she knows and everything she's finding out.