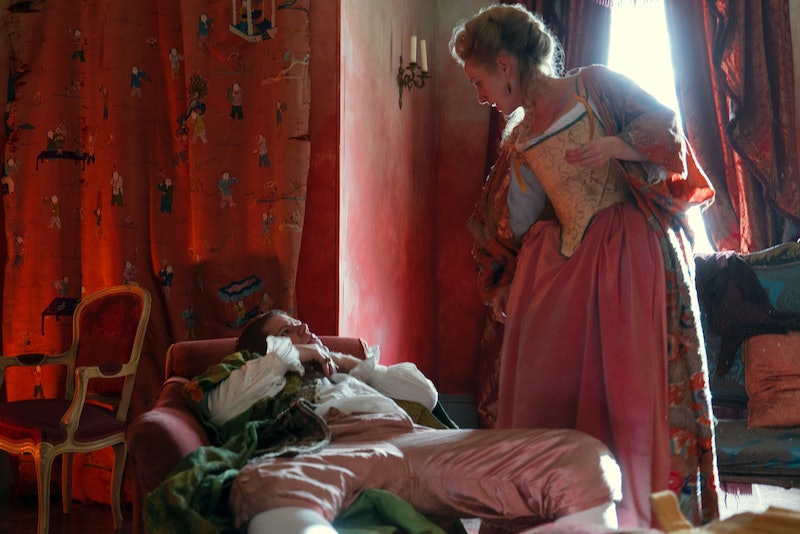 There's something joyful and different about watching Harlots, despite the twists and turns and dark subject matter. So you may be having trouble placing why exactly this show feels so refreshing. According to executive producer and co-creator Alison Owen, Harlots Season 2 (which is currently airing on Hulu) gives audiences a much-needed break from the male gaze. And for women, it's quite a relief, though the effect may be low-key.

"We were excited at the opportunity of using [Harlots] as a brush to paint things with the female gaze," says Owen. "Although the prostitute is a most familiar trope in drama, there are prostitutes throughout the history of cinema and television and stage, it's nearly always people looking out at them." The Hulu series boasts an all-female writing staff and all-female directors. That change in perspective allows Owen and her co-creator, playwright Moira Buffini, to tell a compelling and never lurid story about women in the 1700s.

In film, the male gaze is defined as the practice of depicting or portraying women in art from a masculine perspective. It can be found in the way the way the camera lingers on certain body parts. For example, when a character is walking away, the camera might be angled slightly lower on the back of a female character than a male. It becomes voyeuristic, at worst reduces those characters to objectification, and creates a subtle power discrepancy that seems into our minds. The term was coined and introduced by feminist film critic Laura Mulvey in 1975.

While the "female gaze" in film could just take a heteronormative approach and have that camera linger on male bodies, and films like Magic Mike arguably do just that, when it comes to Harlots the female gaze is more about the female perspective in general. It's a feeling rather than an aesthetic, as well; feeling free to watch without having to filter through that male perspective that we are so used to in storytelling.

"I talk about it a lot," says Owen, "and when you are asked to articulate what difference it makes it's really hard because it's more the experience of watching it than anything else. I felt it really strongly, the first time I saw the first cut of the [pilot] episode — I felt vindicated and excited for it — but the funny thing is I watched it and I found it relaxing. I thought why do I find it so relaxing watching?"

In 2017, audiences of women experienced a similar release of tension watching Wonder Woman, also written and directed by women filmmakers. Even then, it was hard to articulate why watching Diana and the Amazonian warriors kick ass on screen was so much more rewarding, or just easier, than seeing other female action heroes in other films.

"I realized it was because women, when you're looking at art, or watching movies, or watching TV you're nearly always doing double the work of a guy who's watching it," says Owen. "If you're looking at a painting of a naked woman that's painted by a guy you're having to imagine yourself into his psyche." It's a translation we do without even realizing it.

With Harlots, you don't have to try to find yourself in the way a male filmmaker views women. For example, Wednesday's episode features a party at a place called the "pleasure garden." That term, particularly in a show about sex workers, evokes a kind of debauchery/wild party like you'd see in a music video or a Baz Luhrman film. However, on Harlots, it is simply a work event from the perspective of these characters.

"Literally the middle man is taken out," Owen says about how the female gaze operates on the show. "It enables you to do less work, and enjoy the experience in a really strange way. [...] It was like a warm bath, going, 'Oh I can just watch this as if it's coming from my brain and my experience as a woman on this planet, even though it's 18th century. I can just feel I am one of these women.'"

Who would have thought that a show about Georgian era sex workers with murder, kidnapping, and betrayal would actually reduce stress in 2018? Whether you're rooting for Emily Lacey as she ventures out on her own or wondering if Margaret is losing everything as she tries to survive, Harlots won't ever make you do more work than necessary, and it's a huge — if sometimes undefinable — relief.

More like this
Liz Feldman Explains The 'Dead To Me' Series Finale & Fan Theories
By Brad Witter
Elizabeth Debicki On Her Approach To The Most Debated Scene From 'The Crown'
By Grace Wehniainen
How The Thanksgiving Episode Of 'Gossip Girl' Changed Pop Culture History
By Gabrielle Bondi
In 'The White Lotus,' Leo Woodall Gets His Moment
By Gabrielle Bondi
Get Even More From Bustle — Sign Up For The Newsletter