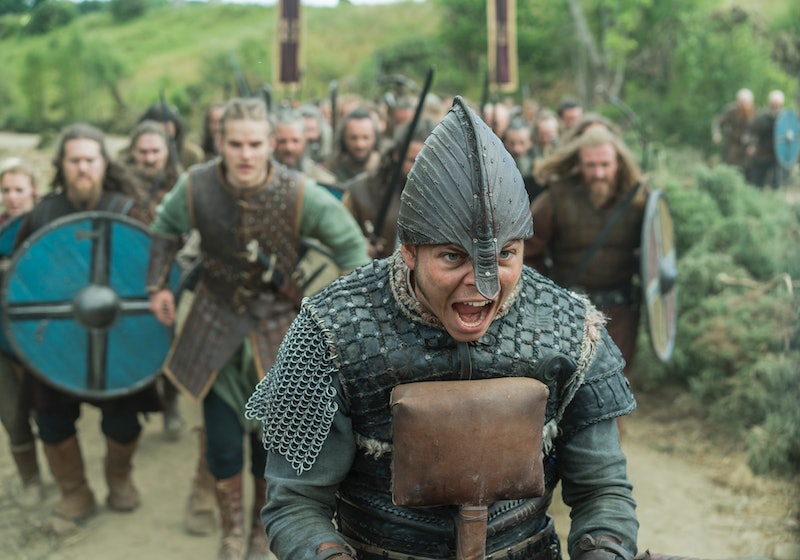 The History Channel's flagship scripted series, Vikings, helped pave the way for shows like Six, Sons of Liberty, and the soon to debut Knightfall — all programs that toe the line between real-life history and fiction. Four years after its debut, it's worth a check in. So, how historically accurate is Vikings Season 5?

Over the years, there's been much ink spilled about what the show does and doesn't get right, but because it takes place in an era so difficult to document, it's tough to make a definitive conclusion. Set in medieval Scandinavia, Vikings traces the exploits of Ragnar Lothbrok, a Norseman warrior whose legacy has been retread for centuries — most notably in The Saga of Ragnar Lothbrok and The Tale of Ragnar's Sons, on which Vikings is loosely based. As noted by Pop Sugar, the source material is, in itself, a blend of fact and fiction, as the events of his 9th century reign weren't recorded until long after they'd occurred, and instead have been filtered through word of mouth from generation to generation. As Dr. Godlove, an assistant professor of English and the coordinator of Columbus State University's Medieval and Renaissance Studies Certificate Program, told the outlet:

"They are based on oral history passed down by descendants, and are more historical fiction than fact, more legendary than accurate depictions of the past of great heroes and warriors."

Vikings, then, comes from an inherent place of historical conflation, reimagining a story that has been altered, aggrandized, and embellished many times over. Throw in some bloody, stylized battles and a smattering of high-stakes drama, and you have a show that often leans much harder into its fictional roots than factual. Its timeline, for example, compresses centuries worth of action into a few short years. In Season 1, Ragnar and his compatriots raid the monastery on the coast — an event Pop Sugar ties to the Lindisfarne attacks of 793 A.D. — but Season 3's "Siege of Paris" mirrors events that took place in 911 A.D., 118 years later. There are also some inconsistencies regarding titles and power dynamics, as well as contention surrounding Ragnar's wives and sons, whose ages, backstories, and lineages have been significantly modified. But rehashing each of these details would give way to a much lengthier discussion. The general takeaway seems to be that while Vikings muddies the waters of history in a few noticeable areas — likely for creative reasons — it's relatively accurate, especially for an era so notoriously incongruous. One thing people unanimously agree on? The costumes are spot on.

Series creator and writer Michael Hirst, for his part, has been vocal that while Vikings is by no means a documentary, he does put a strong emphasis on authenticity while crafting the show. During a Reddit AMA in January, he said that he conducts his own research and consults the show's historical advisers, and that while he does focus on "the most dramatic" elements — it is television, after all — everything on the show is "based on actual history."

Hirst reiterated as much when Bustle reached out for comment. “Everything I write in Vikings begins with historical research. Vikings is about real people living in real worlds, but it is not a documentary. I create drama out of historical material and my real challenge is always to make it as authentic and truthful as I can," he wrote in an email. "In that regard, I was pleased when a Swedish professor told me that this [was] the first time [his] culture had ever been taken seriously and intelligently. I can live with that.”

Season 5 maintains this approach, but with a significant shift: It's the first full season to begin in the wake of Ragnar's death, officially moving the focus away from him and toward his sons. "Historically speaking, two of [Ragnar's] sons — Bjorn Ironside and Ivar the Boneless — actually became more famous than their father," Hirst continued. "And their stories expand the show into new lands and new worlds that Ragnar could never have dreamed of.”

Vikings may be playing by the same rule book in terms of accuracy, but plot-wise, it's ringing in a new chapter.