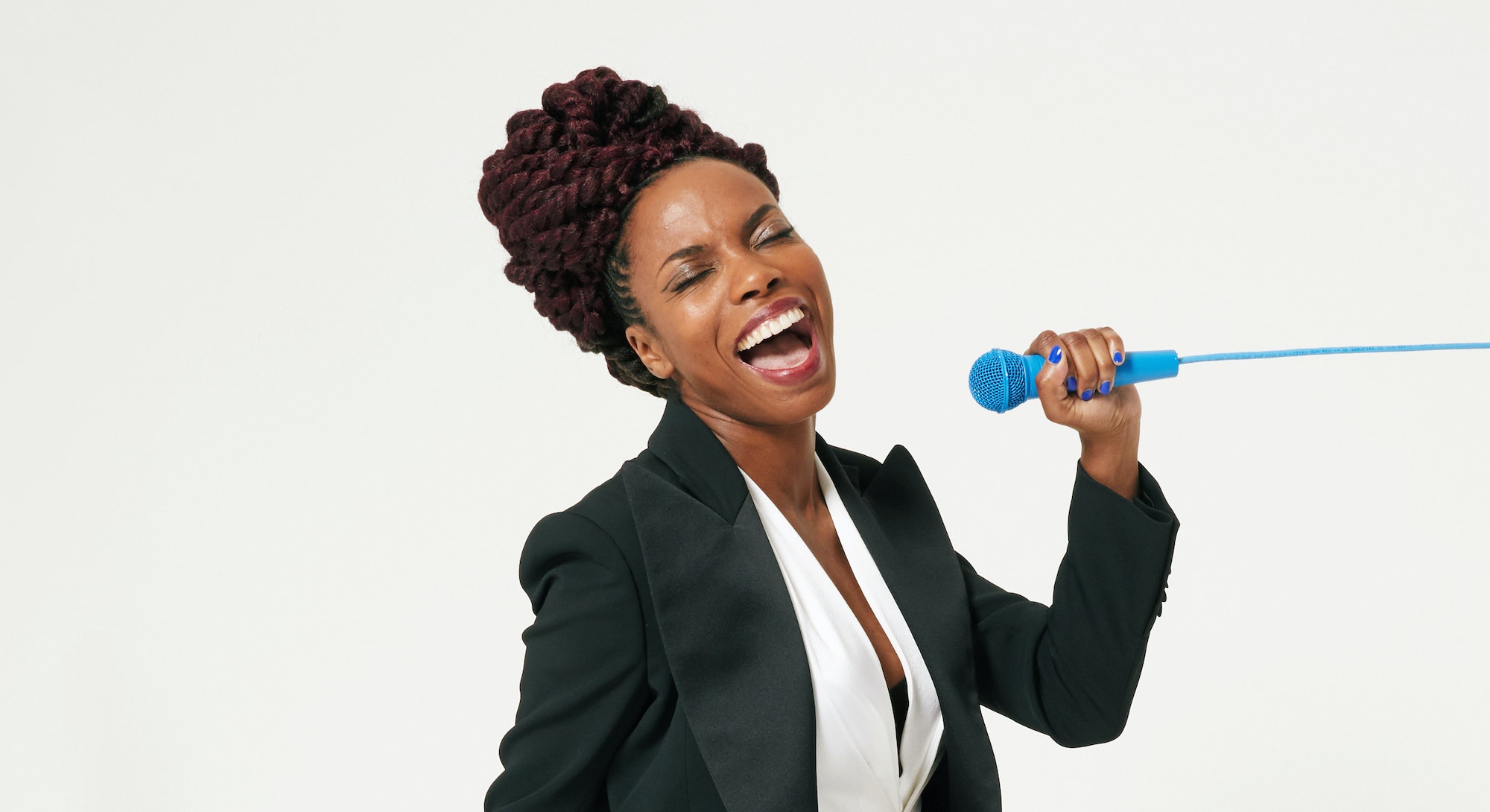 Actor, comedian, and former Saturday Night Live cast member Sasheer Zamata has been doing standup comedy for years (in fact she's one of the highlights at this year's Just For Laughs festival), but that's far from the only thing she's been doing. A veteran in the realm of improv, she's on the BUCKY house team at Upright Citizens Brigade and the Doppleganger improv team with fellow comedians Nicole Byer and Keisha Zollar. Zamata is no stranger to hard work and multi-tasking, but, as with any field, it wasn't exactly an easy road to go from a student to a Saturday Night Live staple. She stumbled. She made mistakes. And she came out stronger and funnier than ever before.

Now, for Bustle's Comedy IRL Package, Zamata explains what she learned about comedy from those early days when she was developing her voice at open mics and via friendly feedback. Here's how Zamata found her own unique voice on stage, as told to Bustle Entertainment News Editor, Kadeen Griffiths.

The first time I ever did standup comedy was in August 2009. I was taking improv classes at the time, and the people in my classes were talking about trying standup. They were a little scared of it, but I like doing scary things.

I saw this open mic happening at this club — I can't remember the name. I just remember going there by myself. I didn’t want to tell anyone because I didn’t want them to see me try to do this new, scary thing.

So, I went up there, did my set, and sat back down in the audience next to another woman. She goes, “Great job!” And I was like, “Thanks, that was my first time.” And she goes, “I couldn’t even tell!” And I was like, “Yes! This is what I’m going to do forever!"

I just got hooked, and then kept doing it and never stopped. From there I went on to perform in front of non-comics and actual audiences, but the thing is, my performances were always passable, funny.

But I needed something more.

I have always had a stage presence. I’ve been performing since I was nine years old, always in church choir or doing musicals or something like that, so being on stage wasn’t a thing I had to overcome. Sometimes, comics may have the writing skill, but they need to get over the performance anxiety. My situation was vice versa: I already knew how to perform, but I needed to learn how to write. I was trying to make funny observations when, eventually, I started to realize that I need to look inside myself to find what’s really funny.

And that's why I love standup. It’s all me. I don’t need anything else.

Some people don’t do that. Some people never go inward, and they're still very, very funny. But, for me to feel comfortable, I knew I had to reveal more of myself. I feel like the audience has a better way to connect with the performer if they know more about them.

And that personal connection is why I love standup. It’s all me.

I can just go and speak, and it feels like a cool, ancient kind of oratory performance where I get to connect to the audience just by opening my mind and my heart. I can give them what I think, and hopefully the audience digs it.

At the time, I had a tendency with my standup to write more act-outs instead of the set-up punch jokes everyone else was writing (act-outs are storytelling bits where performers play characters or act out a scene in front of you). I was really self-conscious about it when I started. Sure, I would get compliments because I can act, but then I got into my head for a while because I realized that I was an outlier: people around me weren’t writing jokes like that.

Eventually, people I really admire and look to for guidance told me to shut up and keep doing act-outs. Why? Because I can. They said if I can do it successfully, then why not do it?

And, when I thought about people who were legendary in standup who I also enjoy, they did the same thing. Richard Pryor did tons of act-outs and voices and characters; he used his whole body and everything he had to bring out what he had to say. It took a lot of trial and error, but I learned that I can do that too and don't have to do what everyone else is doing.

So, that was was really exciting for me, to go through this journey of trying to get what I think is funny out of my head and into the audience’s brains. I still do act-outs and more performative kinds of deliveries on my material and a little bit of storytelling. But now I love it. Because I know it makes me unique.