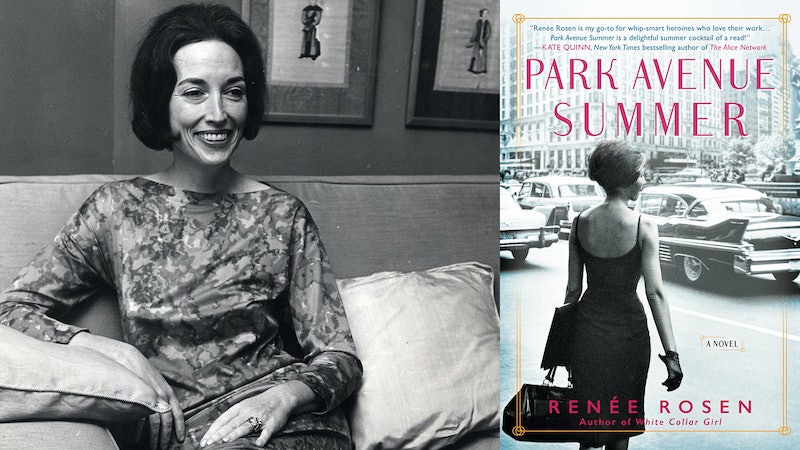 You might think you know the plot of Renée Rosen's latest historical fiction novel, Park Avenue Summer: A young woman moves to New York, desperate to break into the creative business. Instead, she gets a job as a lowly assistant, and watches the days tick by as her dream seems further and further away. But wait! She finds an amazing mentor, and discovers that she had the tools to make her dreams come true within her all along. But Park Avenue Summer takes that story a little bit further: It's a journey back to the summer of 1965 when now-legendary Cosmopolitan editor Helen Gurley Brown was on the brink of changing the magazine publishing world forever — but not without some serious drama.

"When I first started thinking about Park Avenue Summer, I didn’t have a public figure or particular 'media woman' in mind," Renée Rosen tells Bustle. "I only knew that I wanted to write a novel set in New York in the mid 1960s. I had been watching Mad Men and really fell in love with the Manhattan backdrop during that time period. In the very beginning I was creating a purely fictional world around a fictional publication. It wasn’t until my editor and I started talking about the novel that we both realized this book should be Helen Gurley Brown’s story at Cosmopolitan."

"I wanted to subtly show that this was a time of emerging ideas where women were challenging the status quo and stereotypes imposed upon them from previous generations."

Park Avenue Summer follows the fictional Alice Weiss, who leaves her small Midwestern town to pursue a career in photography in the big city, and she unexpectedly lands a job as the assistant to Helen Gurley Brown, the first female editor-in-chief of a then failing Cosmopolitan. By 1965, Gurley Brown had already made waves as the author of the controversial book Sex and the Single Girl, but when she tries to infuse the traditional magazine with modern ideas about women's sexuality and feminism, she is thwarted at every level. Alice soon becomes her confidant.

"In the mid '60s, we were in the thick of the Second Wave of Feminism, and I imagine there were many women who identified with Helen Gurley Brown, [and] others who loathed her brand of feminism and sided more with Betty Friedan," says Rosen. "I wanted to subtly show that this was a time of emerging ideas where women were challenging the status quo and stereotypes imposed upon them from previous generations."

Though we see the plot unfold entirely through Alice's P.O.V., Gurley Brown and all of her many eccentricities — or "Helenisms" as Rosen calls them — jump right off the page. Cameos from recognizable figures including Nora Ephron, Gloria Steinem, and even Hugh Hefner up the ante. Rosen crafted her vision of the magazine and its famed editor through extensive research and conversations with one of Gurley Brown's closest friends, Lois Cahall.

"Getting to know Lois made me feel as though I was getting to know H.G.B. — just once removed," Rosen says. "Helen was a girl’s girl and so is Lois! [She] shared many personal stories and memories with me — things I never would have found in books or YouTube interviews." She adds that Cahall impressed upon her that Gurley Brown "was always a few steps ahead of everyone else and always had the end-game in mind. She was perhaps the loveliest little manipulator to have ever walked the earth."

"I think we can connect with that struggle of starting over, regardless of where it’s at and what time period it takes place in."

But while learning more about Cosmo, Gurley Brown and the feminist movement of the '60s will certainly appeal to readers, it is Alice's relatable story of navigating through her own career confusion and complicated relationships that will stay with readers long after they've turned the final page. For Rosen, this is no surprise.

"For generations, young women who grew up in small towns have flocked to big cities, seeking bigger, better, more exciting lives," Rosen says. "The adjustment can be difficult, and the culture shock is real. I think we can connect with that struggle of starting over, regardless of where it’s at and what time period it takes place in. We’re always looking for someone to root for, and who better than a young career woman making her way in the world?"