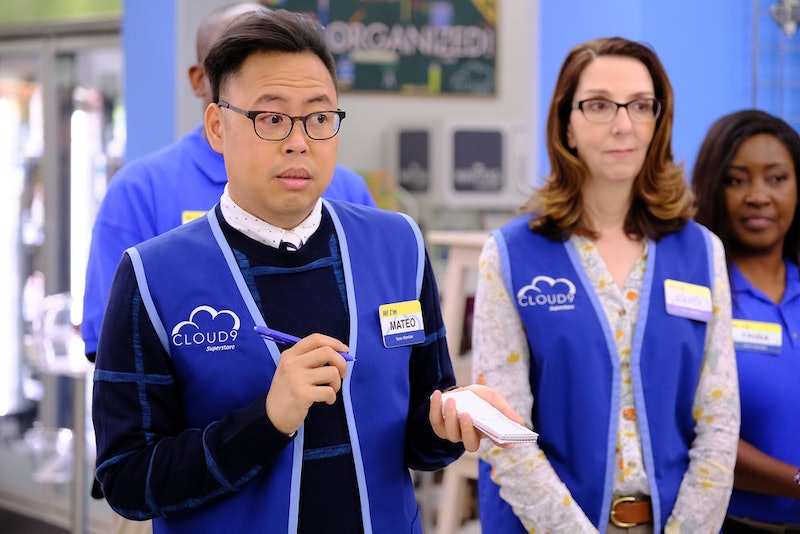 One of the most pressing issues in Hollywood right now is ensuring that a person or community's experience is portrayed authentically on-screen, and the organization Define American is at the forefront of that movement. Created by Jose Antonio Vargas with Jake Brewer, Jehmu Greene, and Alicia Menendez in 2011, the non-profit provides consultation on immigrant stories in TV and film, working on projects ranging from Grey's Anatomy to Superstore to Roswell, New Mexico. Speaking to Bustle, Define American's Executive Director Ryan Eller explains how the organization works with these shows to fight and correct common misconceptions about immigrants in the media.

"The direction I’ve been encouraging Hollywood to move is from dystopia to painting a picture of an America that is abundant, vibrant, because of our diversity and because we are welcoming of newcomers," Eller says, "Not in spite of it."

When Define American works with a show on these efforts, significant changes often end up being made. With Grey's Anatomy, for instance, the Shondaland team reached out to the organization in 2018 wanting to talk about immigration on the show, but lacking a clear vision for how to execute it. So Define American brought in a group of real, undocumented doctors to the Grey's writers room to share their stories.

"Our main strategy for working with writers rooms is to have people who are a part of the community that reflect the storylines that are possible, directly in front of writers," Eller says. "The reason we do that is because that’s the only way we think to give full agency to the folks who are sharing their stories."

After the Grey's writers met with Define American's storytellers and asked follow-up questions as the script was written, Season 14's episode "Beautiful Dreamer" — in which surgical intern Sam Bello (Jeanine Mason) is revealed to be an undocumented immigrant and DACA recipient — was born. It was the first time that an undocumented (with DACA) doctor had been seen on television.

And then there's what happened with Superstore. When Define American got wind that the NBC comedy was going to continue the story of its undocumented character Mateo (Nico Santos) during Season 2, it offered assistance. "I think the showrunner and some of the writers thought, this could just be kind of a one-off thing, he comes out as undocumented and then somehow his status is solved," recalls Eller. That kind of mindset is "frequently what we get from writers who, for no fault of necessarily their own, are not educated about how difficult it is to gain status in this country," he adds.

Define American has worked with Superstore every season since to flesh out Mateo's story, making sure that immigration is depicted as more of a cultural issue than a political one. "[Mateo's storyline] shows the realness of how someone’s experience can be defined in many ways by their status but it also shows the bondedness that that person has to a community of colleagues and customers," Eller says. "Frankly, that is much more akin to the experiences of undocumented Americans."

The organization also recently worked on Roswell, New Mexico, reviewing scripts to ensure that the portrayal of lead character Liz and her undocumented dad Arturo felt accurate and fair. Those collaborations are signs of progress, but there's far more work to be done. Says Eller, "I think we’ve got a long way to go when it comes to treating new Americans with dignity and full humanity."

According to Define American's 2018 media study, Asian Americans (the country's fastest growing immigrant population) and women are vastly underrepresented in on-screen storylines involving new Americans. And then there are crime procedurals, which frequently criminalize immigrants, particularly people of color. These portrayals are not only disconnected from who realistically commits crime in the U.S. ("both undocumented populations and immigrants as a whole commit less crime than native-born Americans," the study noted), but can lead to increased mass incarceration.

Define American is working hard to change these depictions, even using its members' own experiences to inform their actions. After Eller took a recent summer trip to the border, for example, the non-profit partnered with the coordinating committee for the Families Belong Together coalition for a call with over 70 Hollywood screenwriters and representatives, to update them on the status of large groups of Central Americans seeking asylum. And Eller posits that the work Define American does will continue to shift depending on where the cultural needle does, citing the evolution of the LGBTQ movement as a model.

"I think the work that Harvey Milk was doing in the early-to-mid-1970s establishing a coming out campaign, to Ellen Degeneres coming out, to shows like Will & Grace, [it's] a wonderful model for us at Define American of how culture change can create a society that at least at minimum doesn’t stand for homophobia and calls for equality," Eller explains. "We will grow however much we need to grow in order to shift the culture so that it is truly welcoming and inclusive of all people."

In March, Define American partnered with Comedy Central for its "Yes, And…Laughter Lab", a social initiative that connects the network's projects with the organization's advocacy and representation work. And through its internal production team, Define American will continue to produce its own content, from feature-length documentaries on CNN, Netflix, and MTV to documentary shorts, explainer videos, and scripted comedy.

One project at a time, Define American is bringing nuance to ideas about new Americans on-screen, and ensuring that not all storylines paint a bleak or unfair picture of the immigrant experience.

More like this
On 'The Handmaid’s Tale,' Christine Ko Fights Back
By Gretchen Smail
Everything To Know About The Long-Awaited ‘Community’ Movie
By Stephanie Topacio Long
Gabby Petito’s Family Responded To The New Lifetime Movie About Her Final Days
By Grace Wehniainen
'Peaky Blinders' Creator Shares Exciting Update On The Upcoming Film
By Sam Ramsden
Get Even More From Bustle — Sign Up For The Newsletter