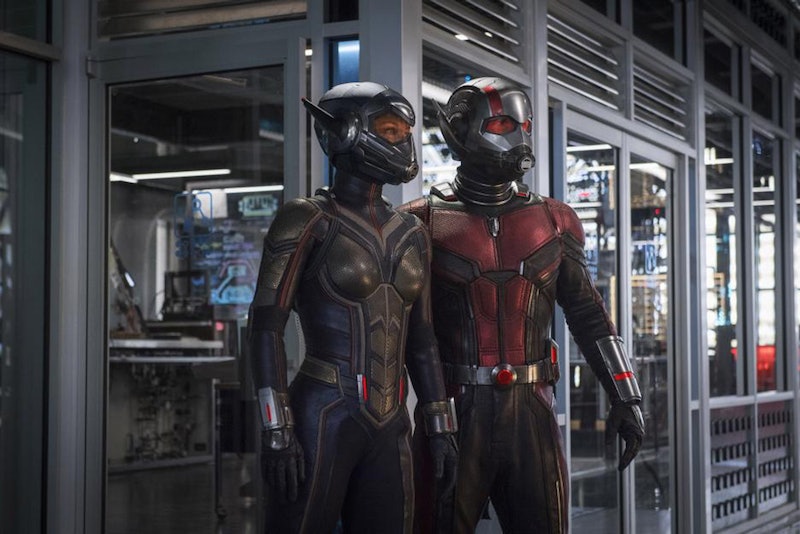 It's been over a month and a half since Avengers: Infinity War unleashed the snap heard 'round the universe, and Marvel fans can't stop freaking out over that devastating ending. With only one end credits scene teasing the upcoming Captain Marvel, audiences were left with few answers as to how the remaining Avengers left alive were going to fix the problem of half the universe ceasing to exist. But there is another Marvel movie coming out before Captain Marvel, one that wasn't teased in Infinity War, that seems like it could answer some questions. Ant-Man and the Wasp, out July 6, is the first MCU film to debut in the post-Infinity War chaos — yet unfortunately, the connection between Infinity War and Ant-Man and the Wasp isn't strong enough that the new movie will hold the answers for which fans are hoping.

That's because on the MCU timeline, Ant-Man and the Wasp actually comes *before* Infinity War. When I traveled down to the set of the Ant-Man sequel in Atlanta last summer, the filmmakers and stars revealed that this movie actually deals more with Captain America: Civil War and the fallout from Scott Lang (Paul Rudd) choosing to use the Ant-Man technology and suit to fight publicly alongside Captain America (Chris Evans).

"We definitely had to deal with the ramifications post-Civil War," director Peyton Reed tells a small group of reporters assembled on set. "That was crucial to Scott, and crucial to Hope [Evangeline Lilly]. I mean, it really is fundamental in the jumping off point about what’s going on between the two of them at the start of this movie."

Reed was thrilled to be able to take what had made the first Ant-Man such a success and continue to separate Scott's standalone movies from the larger MCU story. "What I’m really happy about is we’re free to tell our freestanding story," the director explains. "Once we establish that as the leaping off point, this thing is going on over here with huge personal stakes that are really separate of what’s going on with Infinity War. That is something that was really, really appealing to me. We have enough stuff to track in this movie without having to keep abreast of what’s going on in that."

The events of Ant-Man and the Wasp, which is set in San Francisco, will essentially take place right before (and perhaps even during) the events of Infinity War; it's why Scott and his Ant-Man suit were absent from the most recent Marvel team-up. But Reed is used to having to put his own spin on the MCU timeline; after all, the first Ant-Man "came out in the wake of Avengers: Age of Ultron," as he recalls. With the sequel, "it feels the same way again," he adds. "I like that. Personally I feel that’s the position I want to be in."

But "because of what happened with Scott Lang in the brief time he’s in Civil War," Reed knew that he couldn't ignore those larger MCU consequences. "My first questions were what did Hank [Michael Douglas] and Hope know about Scott going off and dealing with that situation with The Avengers?" Reed says. "How did they feel about it? Surely this would have caused some kind of tension at worst and rift at best between the characters because Hank Pym’s very clear in the first movie about how he feels about Stark and how he feels about The Avengers and being very protective of this technology that he has."

When I watch Rudd and Douglas film a tense conversation in the back of a van, it's clear that things have never been frostier between the actor's characters. Scott tries to make small talk with Hank in the first time he's seen Hank and Hope in a long time, but the two have no patience for Scott's quips. Morale between the trio is at an all-time low. It might seem odd to fans, but don't forget that since Scott didn't appear in Infinity War, the last time we saw him in the MCU was at the end of Civil War. A lot has happened offscreen that fans should know about going into Ant-Man and the Wasp.

"Scott, being a family man, feeling like he got in over his head in his adventure during Civil War basically said, 'Not for me. No, thanks. I don’t want to go on this adventure,'" executive producer Stephen Broussard reveals. "[He] went and pled down a plea bargain out of this misunderstanding he got himself in and part of the terms of that was [getting] put under house arrest. So when the film opens, he has an ankle bracelet, he can’t leave his apartment, he’s living with Luis [Michael Peña] and he’s just trying to stay on the straight and narrow for these last few hours."

While the first Ant-Man featured a group of ex-cons trying to make one last score, their "taste of the hero life" has them all on the straight-and-narrow in the sequel, Broussard reveals. Luis and the rest of the ex-cons have officially gone legit in Ant-Man and the Wasp and started a business called Ex-Con Home Security. "Who better to protect your house than ex-convicts?" Broussard says with a laugh. "And that’s the brass ring waiting for Scott. It’s like, 'If I get out of house arrest, if I keep my nose clean, I get a real job, starting a business, everything is going to be great.' It's the finish line for him that’s complicated by the events of this movie."

As Scott's nearing the end of his house arrest sentence, his path to freedom should be clear. "Free to live his life, to be a father to his daughter," Broussard says. "But of course we wouldn’t have a movie if something didn’t come crashing down and this adventure barreling into it."

Rudd laughs at how Scott thinks he's almost home free by the time the movie begins. "I am now trying to just be as good of a dad as I can be and I haven’t really talked to Hope," the actor says of his character. "We start where I’m finishing the sentence and uh, boy, I tell you just when you think you’re out, they pull you right back in."

While Scott's been safely locked up under house arrest, Hank Pym and Hope van Dyne's lives over the past two years have been a little less comfortable. Broussard and Reed reveal that the father-daughter duo have been on the run ever since the Sokovia Accords came into play.

"Someone knocked on their door and was like, 'You've got to sign this contract because you’re currently in violation of this thing we put in place in Captain America: Civil War,'" Broussard says. "Hank being Hank, he never wanted Stark to have his technology, and said, 'Thanks but no thanks,' and had to go underground. He built this mobile operation, you walk in and it’s huge but when it’s time to go, the whole building can be mobile and move around. It’s got a little handle and squeaky wheels and it’s just fun."

While Hank and Hope might've hoped to keep operating under the radar, Lilly points out that "imploding a building" at the end of Ant-Man kind of killed any chances they had of that. "We finished the last film on the wrong side of the law," the actor says with a big laugh. "They’re on the run, they’re on the lam. We have technology that would be considered a super power in the Marvel-verse. At that point in time, you’re not allowed to have that independently. Our life has dramatically changed not for the better in our opinion."

And good news for any LOST fans — the irony is not lost on Lilly that she's playing a character similar to her iconic Kate "In a weird f**king twist of fate, I’m a convict on the run again," she says, laughing.

In the first Ant-Man, Hope was the one more resistant to working with Scott. But in the sequel, Hank is going to be carrying the bigger grudge thanks to Scott using the Ant-Man tech in Civil War without permission. "Yeah he’s pretty pissed off about that," Douglas says with a laugh. "He really is. That largely sets the initial tone between Scott and Hank. He still looks at [Scott] as not being the right choice for Hope. He's a little judgmental. She can do better."

And now that Hope is finally being given the chance to suit up on her own as Wasp, she absolutely will do better.