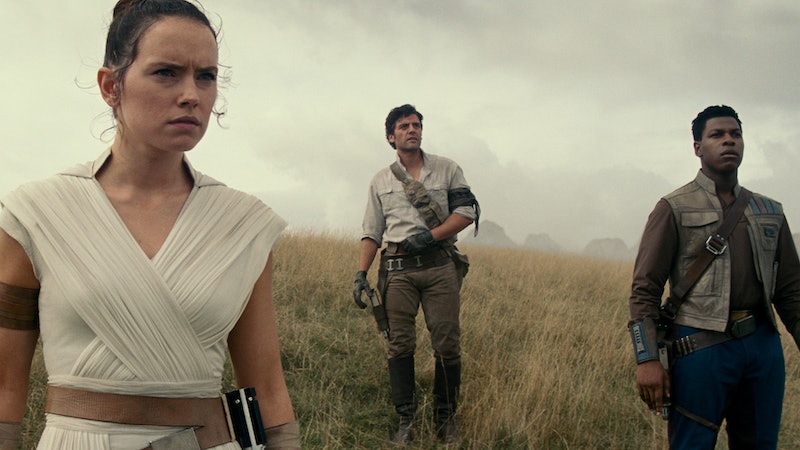 When the first teaser trailer for Star Wars: Episode IX was revealed at the Star Wars Celebration on Friday, April 12, it wasn't just the title announcement that sent fans into a frenzy. The trailer for The Rise of Skywalker teased the return of villain Emperor Palpatine, begging the question, how is Emperor Palpatine even alive?

Though he didn't physically appear in the teaser trailer, Palpatine's laugh is heard at the very end of the clip, which led fans to believe that he will be returning once again, to try and take down the Resistance. Adding to the speculation is the fact that director J.J. Abrams revealed at the panel that Episode IX would find the "new generation" facing off against "the greatest evil," though he declined to tell host Stephen Colbert who, exactly that was.

However, both he and Lucasfilm president Kathleen Kennedy referred to the upcoming movie as the "end of three trilogies," so it would be appropriate for one of the franchise's major villains to reappear. Though he appeared to be killed by Darth Vader at the end of Return of the Jedi, Palpatine has been a looming figure in the new trilogy of films, with Rey (Daisy Ridley) hearing his voice when she first touches Luke's lightsaber. And, of course, there's also the fact that the First Order is heavily influenced by the Empire that Palpatine founded in the original trilogy.

While the trailer hasn't offered any hints as to how, exactly, Palpatine will return from the dead, his reappearance in the franchise has been rumored since October, when the UK outlet Express reported that the Emperor's presence in Episode IX had been leaked, along with other details about the film. According to Esquire, the leak described a scene that involved Kylo Ren (Adam Driver) consulting with a hologram of Palpatine for guidance in the fight against the Resistance. The outlet quotes sources as saying:

Emperor Palpatine will play a role in Episode IX. Specifically, Kylo Ren with an ignited lightsaber, presumably his cross-guard lightsaber, cutting through a blast door on some jungle planet and entering what appears to be a vault. Eventually Kylo Ren is holding a square object that projects a lifelike projection of Emperor Palpatine. Palpatine’s hand is raised in front of Kylo Ren showing blueprints or plans that could be a new weapon.

If Palpatine does return as a hologram, it could be a good way for the filmmakers to avoid having to retcon his memorable death, while still including the influence that he clearly still has over the franchise's villains. And having him interact with Kylo would also be fitting, as he has been shown idolizing Darth Vader, which means that he looks up to the Empire and the villains who were part of it, as he attempts to lead the First Order to victory over the Resistance.

Ian McDarmid, who portrayed Emperor Palpatine in the first two trilogies, told the BBC in 2017 that he didn't foresee the character returning to the new films, but that he would be interested in reprising the role if Palpatine did, somehow, come back. "I suppose there must be a chance but I think you'd find out about it more quickly than I would, McDarmid told the outlet, though he added, "As far as the new films are concerned, I'm dead. There is no question about that."

"But there is what they call the anthology series and actually the most recent one, Rogue One, was about the time when I was in charge," the actor said. "I was referred to a few times, Darth Vader popped up, but you did not see me. Maybe they are keeping me as a surprise for later but I have no idea. Of course, I don't want anyone else to play him."

Though McDarmid didn't seem to think that Palpatine would return to the Star Wars universe, the Episode IX trailer implies that the notorious villain is, indeed, back and more terrifying than ever. As for what form he will take, fans will have to wait until December 20, 2019, to find out for sure.