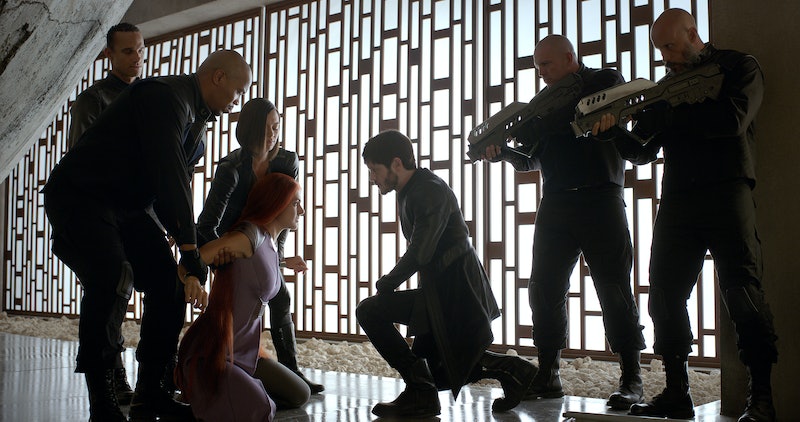 The Marvel Cinematic Universe is all about interconnectivity, no matter how coy the Defenders are about the existence of Peter Parker, Steve Rogers, and occasionally Tony Stark in their fair city. How is Marvel's Inhumans connected to Agents of S.H.I.E.L.D.? The newest addition to the ABC arm of the MCU premieres Sept. 29 and should have a little more of a direct link to its predecessor. Daisy Johnson probably doesn't know the regal nature of her people, but Inhumans is opening up that world to viewers.

In Marvel comics, the Inhuman royal family lives on Attilan — a city on the moon. Yes, Earth's moon. The one that got all covered up a few weeks ago. Technically, Attilan in the comics has also been located in the Himalayas and the Atlantic Ocean, but the dark side of the Moon is its typical (and much more rock & roll) location.

The concept of Inhumans, a type of super-powered individual in the comics, were introduced to Agents of S.H.I.E.L.D. through Daisy, then known as Skye, and formerly known as Mary Sue Poots. While she was raised as an orphan, both of her parents were alive and one of them was a powerful Inhuman named Jiaying. Through them and a mysterious flower enthusiast named Raina, she discovered a hidden city of specially chosen Inhumans on Earth — and then thanks to a crystal spill, healthy Inhumans all over the planet went through terrigenesis after taking their tainted fish oil pills.

We learned in Season 2 that Inhumans are a Kree experiment that was abandoned on Earth. Their abandoned test subjects became the residents of Afterlife, lead by Jiaying. It's weird that they never mentioned the royal family living on the moon, but here we are. Maybe the Agents Of S.H.I.E.L.D. Inhumans, who were lost on Earth far before Black Bolt and his crew, thought they were alone on the world.

But wait, you say, Agents of S.H.I.E.L.D. doesn't take place in space! How could it ever connect to these space royals? First of all, how dare you, Earth is in space and don't you forget it. Second of all, the Season 4 finale ended with Coulson in a space prison. It's possible that Season 5 will have some connection to the Inhumans royal family. Maybe Maximus from the new series is the one who captured them.

Third of all, Inhumans actually takes place partially in the US of A. According to an official ABC press release, "After a military coup leaves the Royal Family stranded in Hawaii, they must find a way to reunite with each other and return home before their way of life is destroyed forever."

Or — is Inhumans an Agents of S.H.I.E.L.D. prequel? Could Jiaying actually show up on this series? According to Screenrant, the Inhuman Royal Family on the Moon are aware of the recent influx of Inhumans on Earth, so this series is taking place at the same time as S.H.I.E.L.D.

That said, don't expect any CW-like crossover events just yet. In an interview with Digital Spy, co-showrunner Jed Whedon said that "without being able to say anything really about that show, it will have its own world, just as we tried to start our own world. Whether or not there's a crossover, we will see."

Whedon also hinted at some more subtle connections. "We also want there to be a bigger reward for people who watch all of [the Marvel shows]," he said, "so that they'll start to see that there's lines connecting it. It's more fun for people who are playing the whole game, but if you don't, you'll still have a great rollercoaster ride."

So it seems like the connections between Agents of S.H.I.E.L.D. and Inhumans will be revealed as the story unfolds. Even if Medusa never meets Melinda May, they do exist in the same universe. We'll just have to keep an eye out of any other Easter eggs, big or small.