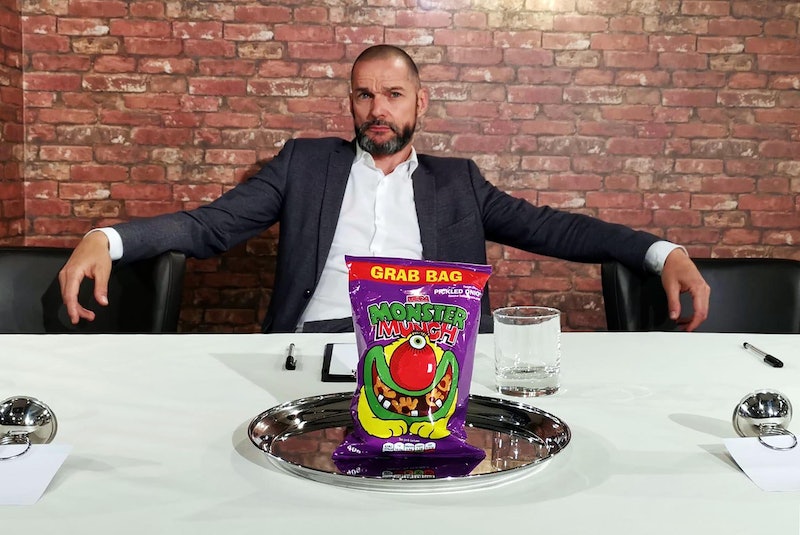 Britain has an affinity with grab bag crisps, none so deep than with Walker's Monster Munch. And this week Snackmaster host Fred Sirieix has given Michelin-starred chefs the seemingly impossible task of recreating the puffed corn delicacies. But how is Monster Munch Made, and what is the secret behind creating that distinctive flavouring?

From what I can gather, the chefs are going to have quite a hard time with this one. BBC's Inside the Factory did cover the process that goes into making Monster Munch on an industrial scale in 2015, but that episode seems to have disappeared off the face of the earth. Walker's does give a small insight into Monster Munch's recipe, which includes "maize and other ingredients [being] mixed into batches, which is then extruded under pressure to form the individual shape of the Monster Munch."

This shape has seen a lot of debate in recent years. In 2017, fans were of the snack were divided in believing that the crisp was either a monster's foot/claw or the silhouette of a monster when stood upright. One Twitter user went as far as reaching out to Walker's for comment on the matter, and replying that "[t]he Monster Munch pieces are feet shaped." Case closed.

So at least the chefs know that the crisps are deffo feet shaped. But what happens after the shape is created? As Walker's writes, the crisps are "then oven dried, and seasoned. After seasoning, the flavouring product is distributed to a series of packing machines." While the manufacturer does go deep with the deets regarding any flavouring, let alone Pickled Onion (their most famous flavour), it seems that the process is actually pretty universal for flavouring crisps.

Irish crisp manufacturer Tayto's adds flavouring to their product "in powder form, after frying, when the crisps are still warm," as the Irish Times writes. "This powder seasoning is sprinkled evenly on the crisps, applied through a small flavour drum where the crisps are 'gently tumbled' for a few seconds before moving down the production line to packing."

Whether or not this is the same process for Walkers, it's probably similar as they too use powdered seasoning to flavour their crisps. For that Pickled Onion tang, the flavouring includes: "Lactose, Onion Powder, Wheat Rusk, some Flavour Enhancers, Fructose, Salt, Acid (Citric Acid), Potassium Chloride, Hyrdoysled Soya Protein, and Salt, and Garlic Powder", as listed on the manufacturer's site.

Viewers won't know until the episode airs precisely how many details the chefs are given to create their DIY Monster Munch. But according to Radio Times, one of the chefs hits a rough patch at the beginning trying "to puff up corn just the right way so that it has that weird aerated texture and pungent acid hit that you may or may not have loved as a child."

This also leads the chefs to order an "industrial extruding machine" from China, like the ones used in Walker's factory, to fully perfect the texture. As Radio Times writes, they "spend weeks to guess what goes into the famous crisps, and go to extreme measures to perfectly replicate the flavour."