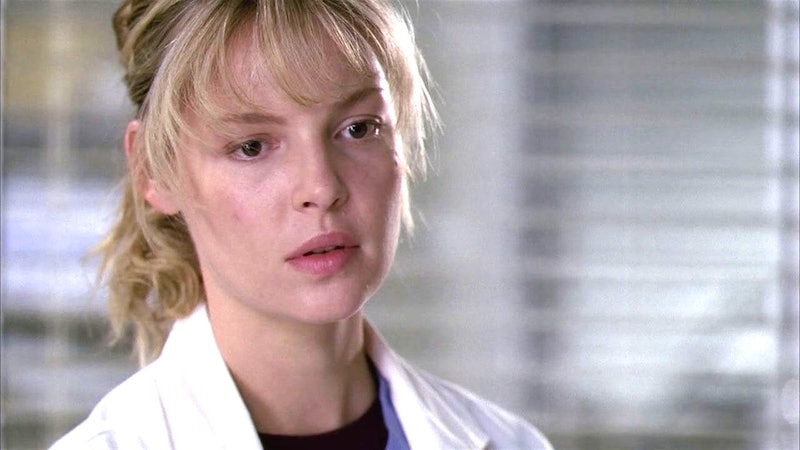 Izzie Stevens was a remarkable woman who went through a lot on your favorite show, like a boyfriend who passes away after a stroke, brain tumors, and a near death experience — name a few. So, sure, the way Katherine Heigl's character will return to Grey's Anatomy for the 300th episode is very clever, but it may lack the emotional resonance that diehard fans really need. And how Izzie's Grey's Anatomy return will work is more spiritual than literal.

E! News reports that, in the upcoming anniversary episode "Who Lives, Who Dies, Who Tells Your Story," set to drop on Thursday Nov. 9, actors Katherine Heigl, Sandra Oh, and T.R. Knight will not actually return to the show. Instead, patients who are similar to the characters the actors played will feature. James Pickens Jr., who portrays Dr. Richard Webber on the show, told E! News that the episode would entail,

"...going down... memory lane. We'll see some actors who come into the hospital after a horrific accident who remind us of Izzie and George and Cristina Yang and it's so cool how they do it... They were such integral parts of the success of the show and such amazing talents in their own rights, so we miss them very much."

It's hard to imagine how these tributes will play out. Will the new characters simply bear a physical resemblance to the same roles? Or will they boil Izzie, Cristina, and George down to their one defining characteristic and assign it to the new characters? Will the new Izzie be hopelessly romantic, the new Cristina mean-funny, will the new George O'Malley, in the words of Entertainment Weekly, be a "hapless naif"?

These qualities are clearly part of those characters, but it's not the whole story. Izzie was on the show for five years, during which she went from hyper moral to human, getting embroiled in infidelity when she sleeps with George, who is married. Cristina was on Grey's Anatomy for an astonishing nine years in which she progressed from the most hardworking intern who needed to work on her bedside manner to the head of a Zurich hospital who is so well-loved that surgical intern Shane Ross moves to Switzerland to work around her. Then there was, George, who spent four years becoming a worse character, starting the show as a sweet if dorky intern and ending it as someone who cheats on his wife.

It seems highly unlikely the show is capable of of condensing years worth of character development into just one episode. So, though they're sure to pack an emotional punch, these tributes may just make us miss the original characters even more.

But it makes sense why Heigl hasn't actually been asked back. According to The New York Times, the star who took home the award for Best Supporting Actress in a Drama Series in the Emmys in 2007 for her work as Izzie decided not to let herself be submitted for the category again, arguing she wasn't "given the material this season to warrant an Emmy nomination." This might be part of the reason why, in August 2015, according to TVLine, showrunner Shonda Rhimes shot down the idea of Izzie ever re-appearing on the series, saying, "I’m done with that story. I’ve turned that idea over in my mind a thousand times and thought about how it would go. And I don’t think so."

Heigl also hadn't seemed particularly keen on returning to the show, and, when asked by Entertainment Tonight in June 2015 if there was any truth to the rumors that Izzie could return to Grey's Anatomy in Season 12, the actor said, "There is not, I'm sorry." As such, the lack of the original actor and thus character is sad, but not necessarily surprising.

So, no, the upcoming anniversary episode probably won't completely sate your appetite for Izzie or any of your other favorite old characters. But it could hit you right in the nostalgia bone and, more importantly, act as a starter before you feast on a marathon of the original episodes.