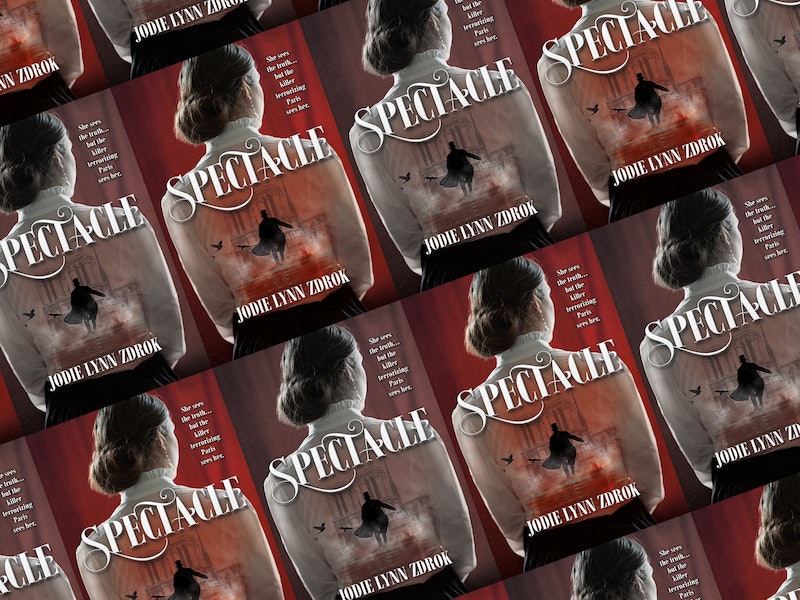 Jodie Lynn Zdrok is far from the first author to dive into the dark history of Jack The Ripper. The unidentified serial killer is infamous for murdering at least five female sex workers who lived and worked in the slums of East London in 1888. Despite the fact that the gruesome cases sparked a media frenzy and an intense investigation by Scotland Yard, they were never solved, leading to decades of speculation, folklore, and legend that has spawned countless works of fiction. Zdrok's YA mystery novel, Spectacle, puts a new spin on the gruesome tale.

Spectacle is set in Paris in 1887, and follows 16-year-old Nathalie Baudin, who writes the daily morgue column for Le Petit Journal. One day, she has a vision of a young woman being murdered — from the perspective of the murderer himself. When the body of another woman is retrieved from the Seine days later, Paris begins to buzz with rumors that this victim may not be the last. As the killer continues to haunt the streets of Paris, it becomes clear that Nathalie's strange new ability may make her the only one who can discover the killer’s identity — and she'll have to do it before she becomes a target herself.

Below, Zdrok tells Bustle about her unconventional take on the Ripper-style murders, and how the gruesome legend — along with a fascinating dive into the history of the Paris Morgue — inspired her historical-meets-magical mystery novel.

Bustle: Can you tell us about the true story that inspired Spectacle and how you discovered it?

Jodi Lynn Zadroc: Spectacle was inspired by two things: Jack the Ripper and the Paris Morgue. I learned about the morgue while in graduate school for history at Brown University; one of my fields was European cultural and intellectual history. I was fascinated by the concept of the morgue — people went to see dead bodies by choice? — and wondered what it would have been like if Ripper-style murders took place in Paris. There's a magical component intertwined with the plot as well, which adds an element of unpredictability.

"I was fascinated by the concept of the morgue — people went to see dead bodies by choice? — and wondered what it would have been like if Ripper-style murders took place in Paris."

I deliberately set Spectacle a year before the Ripper murders so that there would have been no widely-known cultural precedent for the characters. The other real elements include some of the cultural aspects of 1887 Paris. Pseudoscience, hypnotism, and a couple touches of the occult also made their way into the novel as a nod to some of the late 19th century fads.

What was the research process like for this book — what did you read? Did you visit the morgues yourself?

My background in European history provided a solid foundation for my research.

One of my favorite re-reads from grad school was France, Fin de Siècle by the historian Eugen Weber. It's an academic, immersive read that provides incredible context for and detail about life in late 19th century France. I've been to Paris twice, and the second time was just before my revisions, so that informed the novel as well. I took a lot of pictures, no doubt causing passersby to wonder just what was so interesting about a building facade or Notre-Dame chapel such that someone took 35 pictures of it. And while the internet couldn't help me much with photographs of 1887 Paris, it was a great resource for maps, etymology, and checking to see when things were invented.

The Paris Morgue no longer exists. It stood behind Notre-Dame near where the Mémorial des Martyrs de la Déportation, a Holocaust memorial, now stands.

While Spectacle is fiction, much of what it deals with is rooted in reality, especially the murders of women. Did you feel a special responsibility to the victims of these crimes in the writing of your book?

Absolutely. Our attention is often on serial killers (though the term didn't exist back then), and victims are often relegated to a list of names, ages, and occupations. Many more books are written about the murderers than the victims. I think stories about serial killers fascinate us because we both identify with victims ("that could have been me") and distance ourselves from them ("such things only happen to other people").

I think stories about serial killers fascinate us because we both identify with victims ('that could have been me') and distance ourselves from them ('such things only happen to other people')."

We cope with the horror of brutal murder through both compassion and fear. I explored this a bit in Spectacle through the protagonist, Nathalie, who bears the emotional weight of the victims' deaths more and more as the novel proceeds.

Read more about the real-life inspiration behind fiction novels in Bustle's Inspired By Actual Events.