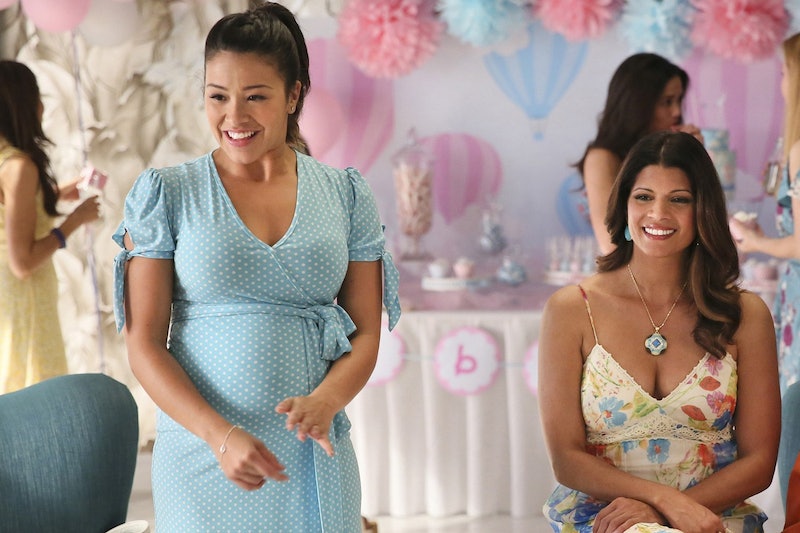 When the fifth and final season of Jane the Virgin comes to its conclusion this spring, fans will look back on the show for its pitch-perfect writing, performances, and twists — and, of course, its sense of style. Throughout its run, the CW series has featured fashion that's kept Jane grounded in reality, even when the show delves into fantasy sequences and telenovela-style melodrama. From Jane's inexpensive Target dresses (she's a writer and single mom!) to Xo's simple, low-energy outfits worn during cancer treatment, the clothing on Jane, chosen by costume designer Sage Kunin, has helped the series stay truthful, authentic, and representative of real, everyday people.

Kunin — who's also worked as a costume designer on projects ranging from TNT's Dallas to Jane star Justin Baldoni's Five Feet Apart — walked us through how five of Jane's most memorably real outfits came to be, and how they kept the show grounded despite all the drama.

Jane and her fellow Marbella Hotel employees are often seen in their uniforms — Jane even sported a maternity version of the dress when she was pregnant with Mateo.

"When I found out that our hotel changed into a child friendly place with a nautical theme, the design of the dresses came to me quite quickly," says Kunin. "I wanted it to seem like the hotel workers are playing dress up to enhance the theme. Keeping it fun and nautical was important, so I designed an anchor and rope striped print."

2. Jane's (Many, Many) Target Dresses

Jane's love of Target dresses has become a recurring theme in the show, and it's not accidental; Target is a sponsor of Jane the Virgin, and so it's no surprise that the titular heroine sports outfits from the brand on the regular.

"Jane and Target were an obvious match," says Kunin. "Stylish on a budget. I’m grateful that Target exists for characters that want to look great and put together fun and interesting outfits, but who may not have a large pocketbook."

When Jane was pregnant with Mateo in Season 1, she sported a number of maternity looks, ranging from the elegant to the ultra-comfortable — but all still very much her style.

"I bought from local pregnancy shops and also used pieces that stretched enough to fit her belly," recalls Kunin. "The most important thing was to stay in our color palette and maintain Jane’s personality in her looks."

In Season 4, Xiomara gets diagnosed with breast cancer and undergoes chemotherapy. As the treatment took hold, the normally upbeat, energetic character struggled with the changes in her personality and appearance.

"I didn’t want Xo to look like she’s feeling well, hence the drab colors, and she didn’t wear any jewels during this time," explains Kunin. "It should be a contrast to her regular self. Chemo zaps your energy, so she wouldn't even be interested in putting on all of the pieces she typically did."

During the Season 2 finale, Jane and Michael get married, and while the aftermath — Michael getting shot by his former police partner — is filled with tragedy, the actual event is beautiful, due in part to Jane's gorgeous Aria wedding dress.

"I had tried on a handful of dresses," says Kunin. "When we tried on that one, we knew we had found it. I can’t put into words how it captures her personality, I just knew it did."

Although Jane the Virgin is a melodrama all the way through, the outfits picked out by Kunin have brought the show down to earth time and time again.