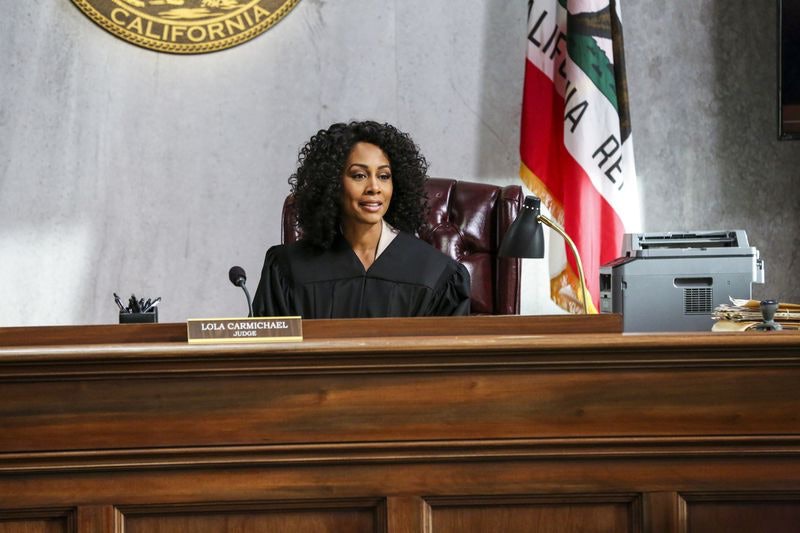 Not only is All Rise's Judge Lola Carmichael a woman of color who rose through the judicial ranks despite all of the circumstances stacked against her, but she's now fighting to change a broken justice system from the inside out. So while an internet deep dive doesn't reveal any evidence that Judge Carmichael is based on a real person, she should nonetheless be an inspiring figure to young viewers. CBS describes All Rise as a courtroom drama that "follows the chaotic, hopeful, and sometimes absurd lives of its judges, prosecutors, and public defenders as they work with bailiffs, clerks, and cops to get justice for the people of Los Angeles amidst a flawed legal process." Lola, played by Simone Missick (Luke Cage, The Defenders), is a newly appointed judge who wants to push boundaries and work toward a fairer justice system.

As All Rise executive producer Greg Spottiswood told TV Insider, "Lola sees the person first, not the crime," and fans should expect the unexpected when it comes to her decisions. "We're always looking for the 'Lola coaster' moment [when] she decides to turn left instead of right. If she inadvertently breaks something, she has to adjust because somebody's freedom is at stake."

Because Lola is a black woman in a sea of white judges and lawyers, Missick sees her character's high standing as a political statement. "No woman of color can ascend to this level in her career, no matter whether it's law enforcement, the medical profession, the legal profession, anything without having butted against a system that does not want to see her succeed, that does not believe that she deserves to be there," she told TV Guide. So naturally, Lola's background will inform the way she rules in many of her cases, because she understands the limits and different expectations that society has placed upon people of color.

It's for this reason that Missick says a show like All Rise is unlike any other court drama on TV. "It's sometimes hard for legal dramas to honestly assess the fact that we are biased as a society, and racial bias is a huge part of it," she continued to TV Guide. "It is easier for [Lola] to look at each case in front of her by the individual, because she herself comes from a community that is often misrepresented or unfairly criminalized."

Importantly, Lola also has plenty of shortcomings. She makes mistakes, learns from them, and powers through. "When we see judges, they are normally in the back of our legal system. This character is a woman who is vulnerable, flawed, and still handles her emotions," Missick said during the Television Critics Association's summer press tour, per Deadline. "We see all of these beautiful women on TV, women of color, women of all shapes and sizes ... and yet the way that all of us women are, you know, all of us people are, we are flawed ... And I'm tired of seeing perfect characters on TV."

That actually makes Lola the perfect role model. She's aspirational and successful, but also human — which for young viewers, should only make the idea of becoming someone like her feel more attainable.