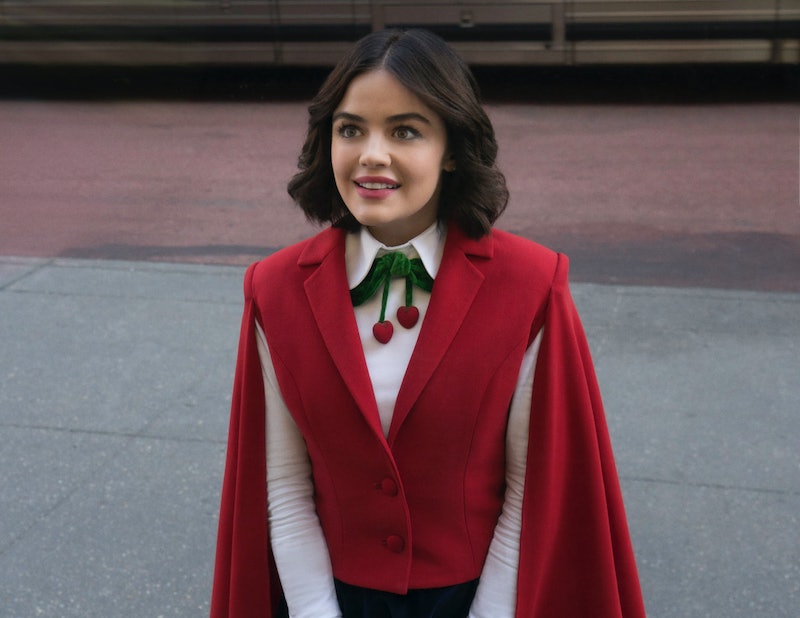 If Riverdale puts a horror-tinged spin on the Archie Comics, its spinoff Katy Keene transforms them into a full-on fairy tale. In the world of the show, New York City isn't the dingy, cynic-filled metropolis we know and love it as, but a place full of bright colors, fabulous clothes, and the distinct possibility that you might land a record deal on your first day in town. Much of this fantasy feel is owed to the original comics from the '40s, which followed the titular Katy, a model and movie star, living in a similarly idealized New York. Katy's outfits contributed to that heightened sense of possibility — she never wore the same outfit twice and preferred a color palette of red and pink. It's an aesthetic that Katy Keene costume designer Jenn Rogien wanted to be a core part of the show.

"For us, it was very important that [Katy is] fashionable and that she's stylish, but at the same time we wanted to tie into the iconography of the comic books," Rogien tells Bustle. "There's this wonderful timeless quality that is a nod to the New York of the imagination."

The CW series is a modernized take on the story told in the comics. Instead of being a model or actor, this Katy is a 20-something aspiring fashion designer who lives by her late mother's words that "you don't have to be rich to be stylish." And while Rogien and the crew kept Katy's warm color scheme intact, they tried to do so in a way that was "fun and whimsical and somewhat chic and sophisticated, as opposed to an explosion of hearts everywhere."

To create Katy's look, Rogien says that her team allowed themselves the freedom to shop wherever felt "right," which is essentially the same as saying "without much consideration for the cost." This is how Katy always looks so trendy despite not realistically being able to afford much — she's sort of like a modern day Cinderella. Ultimately, Katy and the rest of the characters wear a mix of high and low-end clothes, as well as a combination of pieces Rogien and co. made themselves and shopped in-store.

The original comics similarly put a heavy emphasis on Katy's clothes — a joint project between illustrator Bill Woggon and an entire community of budding designers. According to Randy Duncan and Matthew J. Smith's Icons of the American Comic Book, Woggon's Katy Keene spinoff comic was successful because he filled the pages with designs from fans and credited them all in print, encouraging a fervent and interconnected fanbase. It makes sense, then, that Katy is no longer a model, but a designer who makes all the clothes she wears herself. Like Katy Keene's own readers, her dream isn't to be in front of the camera, but to have her designs sold in Lacy's, the luxury department store where she works.

"When you actually flip through the comics, it's sometimes hard to distinguish what was reader-submitted [versus Woggon's work], especially in some of the editions that are heavily reader-submitted," Rogien explains. "So there isn't really a way to separate them from the comic book world that is Katy Keene."

Unsurprisingly, Duncan and Smith wrote that many of these fans grew up to work in the fashion industry, with well-known designers like Anna Sui, Willie Smith, and Betsey Johnson among them. In 1978, fashion designer Marilise Flusser, a fan of the comics, even designed windows for Saks Fifth Avenue featuring vintage Katy Keene covers — an event that feels neatly reflected in the show, as Katy helps her coworker Francois design the windows for Lacy's in the pilot episode.

This all adds up to a multi-layered, self-referential show that honors its roots while also building on the innovations of early designers to make something entirely new: a fashionable fairy tale, where you really do believe that Katy and her friends can achieve their dreams in the big city.