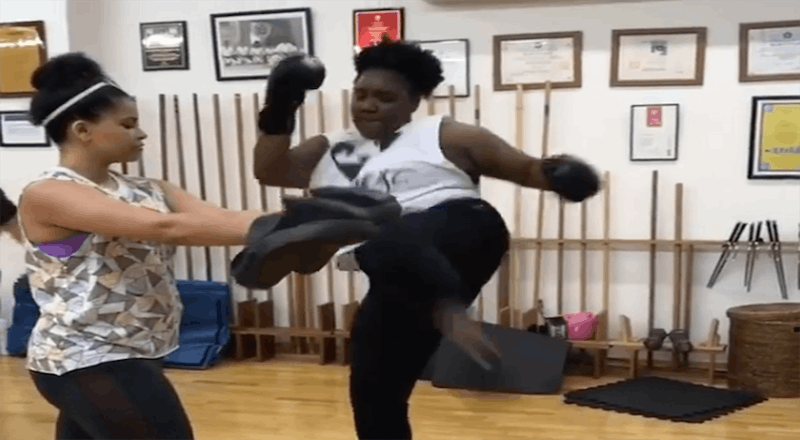 Even in 2017, mental health is something that people still rarely talk about, especially if they're the ones experiencing the issues. That was the case for me, at least. For so long, I battled depression and low self-esteem, but kept my battle totally private. This year, though, I made a conscious effort and promise to myself that I would take a hard look at the negative energy and thoughts I aimed at myself by challenging the very things that held me captive. After two months of hesitation, I enrolled in a kickboxing gym. And I can assuredly now: it has completely changed my life and my mental health.

My desire to change my perception of myself and actually stick to whatever activity I chose didn't come easy. Since elementary school, I've battled my weight and self perception. I was always taking advice from magazines, following diet fads, and trying pills in order to find a way to shrink. It was one workout after another, and I found success with none of them. But, when I was 10 years old, I discovered a fascination with boxing, after joining my mom whenever she would do her Tae-Bo workout tapes.

Fast forward to about two years ago, when I found Foxy & Fierce all women's boxing gym in Hollywood where I took a couple classes, spurred on by none other than Michael B. Jordan in Creed. Even then, though, I couldn't commit to continuing. At the time, my insecurities greatly affected how I perceived myself, and I thought that I wasn't as good as the other women in the camp. I didn't feel encouraged to go back and try again.

This year, though, I felt determined that I had to go back to square one and fully commit myself to kickboxing. And I'm so glad I did. Kickboxing training tends to involve intervals, two to three minutes of intense, repetitive movement, where you hit a punching bag over and over again or deliver kicks. Being able to punch and kick my frustrations out each class has helped me deal with my self-esteem issues and battle my depression. Every hidden emotion and insecurity that I had with the way I think about myself, I'm tackling those issues now. I'm using kickboxing to help myself understand where my insecurities sprouted from, and I'm learning how to see that the negative views I had of myself were lies, not truths.

By my second week of kickboxing, I finished a difficult class in tears because I hadn't realized how strong I was until that very moment. For the first time, I allowed myself to really feel vulnerable with my feelings. Before, I had neglected examining how I really felt about myself because I was so used to playing the role of victim: I focused hard on everything that hurt me — the times people called me ugly, the moments I felt alone, the cruel words said by others. I'd become so accustomed to feeling this way, and the tears I shed after class was my way of experiencing emotions I've never felt before. This crying was a sign of strength, not weakness.

Kickboxing, as challenging as it is, has uncovered some parts of me that I thought were weak, like my willpower and discipline, and made me realize that I am actually more capable and stronger than I thought. For other people who battle low self-esteem issues, depression or anxiety, exercise can make a huge difference; studies have proven exercise helps relieve some of the symptoms of these conditions. Finding a workout like kickboxing has helped me, at least, relieve so much of the mental pain I've felt for so long.

For once in my life, I can finally understand the strength that is in me. It's a journey that I didn't think would pan out the way that is has, but finding this sport has made me a better person. No diet or other method I've done in my life has given me the results and love that I've felt for myself in the last two months. My trainers, too, have helped, as they've pushed me harder than I originally wanted, which is exactly what I need in order to shed the negative thoughts in my mind that have festered for years.

My success with kickboxing is helping with my mental and physical healing. I have more motivation than ever before to take my fitness seriously and defy the limits people try to place on me, and it feels better than I ever imagined it could.