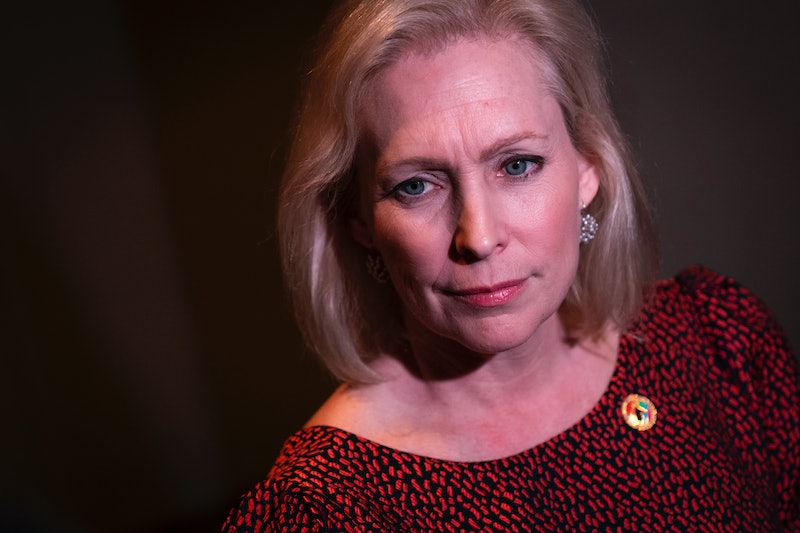 An article published Monday morning in The New Yorker revisited the case of Al Franken, who resigned from his Senate seat amid allegations of sexual misconduct and calls from his colleagues to step down. Franken told the magazine that he's angry he didn't get "due process," and that he's found support from some who tell him he shouldn't have resigned. The article renewed an ongoing debate about how society should deal with men like Franken, who have been knocked from their pedestals of power by the #MeToo movement. Sen. Kirsten Gillibrand, who said Franken should resign soon after the allegations were made public, tells Bustle she believes there's a way for the accused to reintegrate — if they're willing to put in the work.

"I mean some allegations are criminal, like against Harvey Weinstein, who should go to jail," Gillibrand says in an interview with Bustle on Monday evening, after addressing the New Yorker report in a Mic town hall in Manhattan. "In this instance of Sen. Franken, if he wants to be able to rehabilitate and reemerge, that's his decision."

Gillibrand's 2020 presidential campaign has centered her support for the #MeToo movement and survivors of sexual assault and harassment. As dozens of powerful men have been accused of misconduct over the past several years, there's been a charged conversation about if and how they should return to the workforce or the public eye. Is it OK that Louis CK returned to comedy, Bill O'Reilly got a new radio show, and some petitioners want Franken back in politics?

Gillibrand tells Bustle it's certainly possible for men who have been accused of misconduct to reenter society. "For any person who wants to start over, you just need to start with an ounce of humility, to say you were wrong and you're sorry and that you want to do better and do right by this community," she says. "People will accept that, they will allow it, they will welcome you."

Radio host Leeann Tweeden first accused Franken of groping and forcibly kissing her while they were overseas for a 2006 USO performance in 2017. After Tweeden came forward, seven other women accusing Franken of groping them while posing for photos. Franken said he feels "genuinely, genuinely bad" about a photo of him pretending to grab Tweeden's breasts, but denies forcibly kissing her. Regarding the other women who accused him, he said "I feel terribly that I've made some women feel badly and for that I am so sorry, and I want to make sure that never happens again."

Gillibrand was the first senator to call for him to resign, and while numerous other Democratic senators made the same demand, she has faced more scrutiny than others and, reportedly, lost donors because of it.

"I’d do it again today,” she told The New Yorker. “If a few wealthy donors are angry about that, it’s on them.”

At the Mic town hall, Gillibrand made clear that everything Franken has done, including resigning his Senate seat, has been his decision alone.

"Blaming a woman for the actions of a man, I don't know. I don't believe in it. I don't think it's right."

When Mic editor-at-large Jake Horowitz, who was moderating the event, pressed Gillibrand on The New Yorker's story and whether she now regretted calling for Franken's resignation, she became impassioned in her frustration.

"He had eight credible allegations against him, two since he was senator, and the eighth one happened to be a congressional staffer," Gillibrand said, noting that The New Yorker article attempted to report out only Tweeden's allegation and not the seven others. "Now I could have told those seven senators, and any of the 35 senators that came out against him, that there is no prize for someone who tries to hold accountable a powerful man who is good at his day job. But we should have the courage to do it anyway. So no, I don't have any regrets."

Gillibrand also spoke forcefully during the town hall about her plans to end mass incarceration, tackle climate change, and provide a path to citizenship for undocumented immigrants. But when Horowitz asked her about societal expectations and how she's had to change her approach running for president as "both a woman and a mom that men wouldn't have to experience," her anger was unmistakeable.

"Let's be clear," Gillibrand added. "There is absolutely a double standard. Women are asked to hold accountable their colleagues, the men are not."