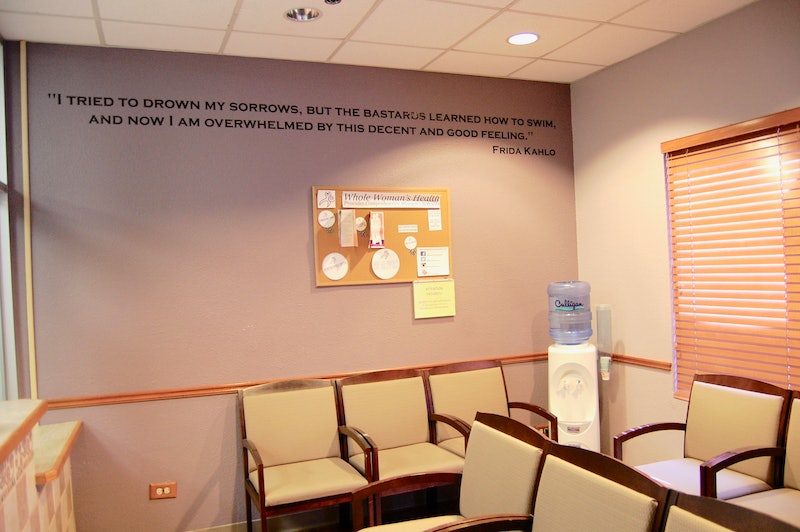 Kristyn Brandi remembers being indirectly cautioned by her family against speaking Spanish in school when she was younger "because that was thought to be a defect" — due to "systemic and internalized racism." But as she trained to be a gynecologist, Brandi, who is Puerto Rican, found that her language skills were valuable to patients who might otherwise not be able to communicate their needs or understand diagnoses and treatment plans. Thanks to her background, Brandi's patients don't experience the language barrier many Latinx people seeking reproductive care can run up against.

But Brandi, a member of Physicians for Reproductive Health’s Board of Directors who is on the faculty at Rutgers New Jersey Medical School, is just one doctor working in the larger maze that is health care in America. That maze is very difficult to navigate for Latinx people who don't speak English — and the obstacles aren't limited to the doctor's office. A series of stigmas and systemic issues, many of which are rooted in language, restrict access to reproductive care for the Latinx community.

"Our current health care systems do not adequately provide services and information in the languages that Latinxs speak and in a way that resonates with their cultures," Nina Esperanza Serrianne, health equity policy analyst at the National Latina Institute for Reproductive Health (NLIRH), tells Bustle. "For a lot of people, just getting in the door of a health care provider is a big enough challenge."

Insurance Policies Have Their Own Indecipherable Language

The American health care system is difficult to figure out even if you speak English, and the rules and regulations around health insurance have been very much in flux since President Trump took office. While the Affordable Care Act (ACA) increased the number of Americans who are insured, issues of access remain, including a person's immigration or employment status.

"Immigrant Latinxs are more likely to work in industries that do not offer health care coverage, and they’re less likely to be able to afford costly private health insurance," Serrianne notes.

Latinx people have the highest uninsured rate of any racial or ethnic group in the country, according to the U.S. Department of Health and Human Services' Office of Minority Health.

"We’re less likely to access health care largely because of the language barriers to get timely and quality health care services," Rita Carreón, Deputy Vice President of the Institute for Hispanic Health at UnidosUS tells Bustle. "Even though we have made numerous progress over the last couple years in terms of access to health insurance, we still have a lot of challenges in accessing and navigating the health care system."

Andrea Soto Abarca, hotline coordinator for the Lilith Fund for Reproductive Equity, a group that helps women secure funding for the various needs that arise around abortions, notes that even if a person has health insurance, they may find their policy doesn't cover procedures like abortions.

Finding A Provider That Gets It

Ideally, a patient would see a doctor who speaks their language. But finding a doctor who does — and is in-network or otherwise affordable — isn't always possible. Brandi says even her patients don't tend to seek her out because she speaks Spanish.

"If you have the luxury to be able to pick your provider, sure," she says. "But I mainly work with patients that are on Medicaid or Medicare, so most of them don’t have the opportunity to choose their own provider. They go to whatever service hospital is available to them."

The Lilith Fund's Abarca previously worked as an interpreter at a medical clinic in Austin that served low-income families. She says patients primarily found the clinic through word of mouth. Inter-community recommendations like these are especially helpful in the Latinx community, so that people know where they can go to be understood — both literally and culturally — and cared for in a safe environment.

UnidosUS supports the use of promotores de salud: Health workers who are "trusted by the community, from the community many times, and really understand the needs of that individual," per Carreón. Community-based health care workers and organizations can be vital to getting Latinx people the care they need by coordinating between providers and patients. Given the confusing political climate around health care at both the federal and state level, Serrianne says promotores are also helpful "just in clarifying to people what is the current situation and laws."

In addition to community-based clinics and centers, Title X-funded centers like Planned Parenthood help to offer linguistically appropriate care. According to NLIRH, about a third of Title X patients identify as Hispanic. That kind of care is eroding, though, as the Trump administration pushes to take away government funding for Planned Parenthood and other Title X centers that provide or discuss abortion with their patients (federal funding does not go towards abortion provision itself under the Hyde Amendment).

Immigration status may become an incidental barrier for abortion access, too.

"Sometimes there’s a fear of going to a clinic, hospital, or any facility where they ask for an ID," says Abarca, who responds to these concerns at Lilith and used to be undocumented herself. "There are fears of, 'Am I going to be putting my family at risk by going to an institution where they can find out that I’m undocumented or that I don’t have any residency status?'"

South of San Antonio, Texas, there's only one abortion clinic in the game: a Whole Woman's Health in McAllen, located in the Rio Grande Valley. Patients would likely have to cross a border patrol checkpoint to travel so close to the border.

"If they have to go through an immigration checkpoint just to access health care services, that’s another calculation people have to make, Serrianne of NLIRH says. "A lot of times, people put their safety over their health care, understandably.”

Speaking accurately and comfortably with any doctor is difficult, and that's especially true when you don't speak the same language as a provider.

"You’re more prone to having miscommunication, misdiagnoses because of lost translation or lack of interpreters that are accessible," Carreón says. "Having language-appropriate information is not only critical, but having information that is clear, simple, and actionable should be the golden standard across the board."

Interpretation services also vary: some places may have a dial-in service or use app services, while others may have bilingual staff. Some Latinx patients may not even know they have a right to a medical interpreter. But an in-person interpreter or a bilingual provider can make a world of difference, especially in the sensitive and stigmatized realm of reproductive health.

Brandi says most of her patients are "surprised" to find she speaks Spanish. "Most of them expect to not be able to communicate well and usually bring a family member or friend to help," she says. "But I feel like once we start talking, the conversation is much more comfortable and at ease." But while family and friends can be helpful for translation, Brandi says they may also keep patients from opening up about sensitive issues like domestic violence or contraception.

Andrea Ferrigno, the corporate vice president of Whole Woman's Health, says the organization behind the landmark 2016 Supreme Court abortion case works to make its locations reflect the patients it serves.

"We are very intentional about making sure that our clinics are fully staffed with bilingual staff so that we can meet the needs," Ferrigno says.

In Whole Woman's Health facilities in Texas, that largely means Spanish-speaking staff. But that differs in other locations. Ferrigno says in Peoria, Illinois, the organization sees many French-speaking patients and is working to meet their needs.

As Ferrigno sees it, providing staff who can literally speak to the needs of a community "is a great example of how independent abortion providers are always raising the standard of care."

But even with a largely bilingual staff, there can be moments of linguistic confusion with health providers, as there are variations in language depending on where a patient is coming from.

"Thankfully we haven’t had any situations where we’re not able to navigate that, but it’s not as simple as just English and Spanish," Ferrigno, who is from Venezuela, says. "And then even within the culture there you see a lot of Spanglish and Tex Mex, so what Spanglish may look like in other parts of the country is not the same as it sounds in south Texas."

When Brandi speaks to her patients, she says it's "like talking to a sister or cousin." That makes the relationship more open, which is key to offering proper care. Brandi suggests doctors actively learn the languages of the communities they work with — she's currently learning Haitian Creole for her work at Rutgers in New Jersey.

Providing care is not just a question of language, however. Without cultural awareness, a provider could miss how a person's family or religion impacts their health care decisions. That's why Carreón of UnidosUS says that cross-cultural training should be part of providers' work as well.

"When you have cross-cultural training, you have a much better assessment of what are the individual’s experiences, either within their own community and heritage, but also in terms of coming to this country and being able to navigate a health care system that may be completely unknown to them," she says.

The series of barriers for non-English speaking Latinx people seeking reproductive care range from the complexity of the American health care system to the exact wording in pamphlets. Without being able to wave a magic wand that simplifies insurance programs, one solution is to have people in the room who can speak the same language as patients, or for non-Latinx providers to proactively learn the language and become more culturally aware.

"We want to make sure that people feel welcome and that we are all part of this community," Ferrigno says. "We work, live, go through the same issues the community is going through at the same time and similar ways as our patients."