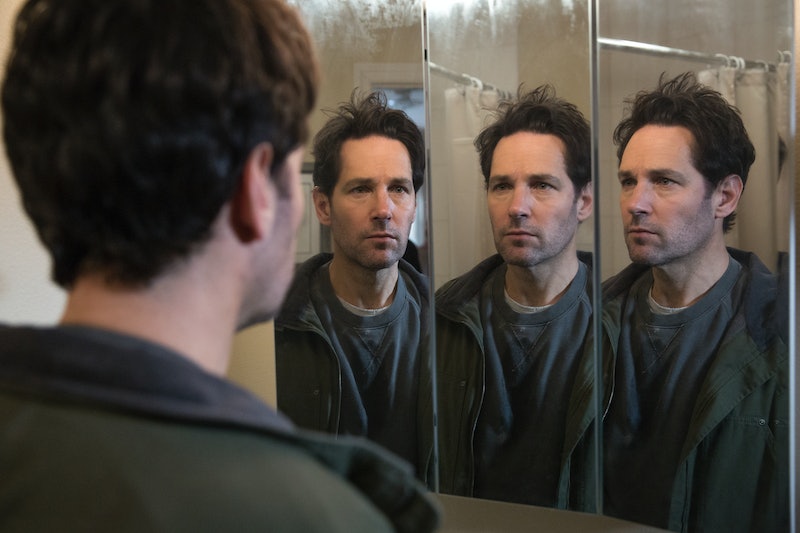 When we first meet Paul Rudd's character Miles on Living with Yourself, his endless parade of rumpled blue and grey sweatshirts signals his monochromatic, banal existence. He's depressed and downtrodden until the arrival of his clone — a new and improved version of himself that's the result of a spa treatment gone wrong — delivers an existential shock to the system. He's the well-dressed, well-coiffed competition for his wife, Kate, and for Living with Yourself costume designer Leah Katznelson, he represented a deceptive challenge.

"When I first read the script, I thought, 'Oh, this is so simple. This seems really straightforward,'" Katznelson recalls to Bustle. But she underestimated the challenges that would come with calibrating the subtle sartorial differences between Miles and his clone — and with telling everybody apart. Not only did she have to dress Rudd twice over, but also the crew members helping the Ant-Man star act opposite himself. As a result, there were anywhere between four and six sets of the exact same costume once you factored in stunt doubles, photo doubles, and stand-ins.

Over the course of the series, Katznelson says that Miles and his clone had over 100 combined costume changes, which is shocking given how humdrum their wardrobes are. But that's entirely the point. "Repetition is important both for the storyline, because there is so much repetition of going back and forth within their world," she explains. "Also [Miles] lives in this very repetitive environment of his day-to-day routine.... We wanted to kind of echo that sentiment by offering a certain tight closet and keep that grounded in reality."

The starting point for both wardrobes (which were created simultaneously) was Old Miles — both who he'd been in better times and the depressed person he had become. "Maybe five years ago he was doing well, he was successful in his industry, he might've been making a little bit of money, he got a couple of nice things," Katznelson theorizes of Old Miles' closet. "I think [Miles] did have taste and a bit of style — he is in a creative industry. But things have sort of petered out from there and gone slightly downhill, so things that he used to wear that sort of fit him nicely then don't quite fit exactly the same now."

Now, much to his chagrin, he's faced with this improved version of himself, whom everyone likes better — including his wife, Kate (Aisling Bea). But while New Miles might look more put-together, Katznelson says that his clothes are coming from the same closet as Old Miles. "We sort of thought about it as: He has one closet in this house and some boxes in the attic. And so what would that closet look like? What pieces have been shoved left of center and are out of the light?" she explains. "And those are the things that we extracted and pulled back out for new Miles. They're things that you might wear when you're feeling a little more confident about your frame or how you're presenting yourself."

Color is also utilized in the show to help audiences tell the two characters apart — Old Miles, for instance, wears solid, muted tones. "The color had sort of been removed from his life," Katznelson says of the Living with Yourself protagonist. "He was going through a very subdued, monochromatic, homogenous lifestyle.... his day-to-day mundane activities become rote and uninspiring. And so he's not really taking the care to put himself together in the same way." As for New Miles, his clothes are still subtle but much more flattering. He wears lots of blue and green, colors Katznelson chose because they complemented Rudd's eyes.

Old Miles' clothes also got a lived-in feel thanks to the costume department, which aged and dyed them. Just picture the grey sweatshirt with the stretched-out collar the main character wears, or the nearly identical one New Miles wears, which sports an impressive toothpaste stain at the end of the season. "We let a lot of things live on set. If the collar was askew, that's how it stayed," Katznelson says. "There was more precision in the collar-in, collar-out, tucked-in versus not-tucked-in. The New Miles was always more tucked-in and tidy, and the Old Miles — even in those nuances — was not."

These two versions of Miles even wear two different clothing sizes, with the protagonist wearing a size larger than his clone. "Everything on the Old Miles was a little bit longer in the hems and the sleeve length — nothing was tailored just so, everything felt slightly more rumpled," the costume designer says. "[New Miles' clothes] had a more complementary hem; everything was sort of more perfectly fit and tailored to his frame."

The subtle differences between Rudd's two characters aren't noticeable unless you're looking for them, which was the costume department's goal. "We wanted everything to feel like... you understood the differences between the two of them, but you weren't quite sure how you got there," Katznelson explains.

She also praises Rudd for the physicality he brought to both roles, which also informed the way his clothes fit. "When you put your body in a certain position... you look less trim than you might actually be," she explains. "Paul's a real master of that. Like, quickly shifting just your body weight in your chair, and you look like a different person."

Paul Rudd's good looks ironically proved to be an obstacle of their own, since Old Miles needed to look schlubby, washed-up, and depressed. "The challenge is that Paul looks good in clothes and is a lovely, handsome guy," Katznelson says. "We also really were careful with our palette, to pick things that washed him out rather than brought out his beautiful blue eyes.... That's part of reason why the blues and greens play so strongly [on New Miles], because they're just really handsome colors on Paul."

One thing that no one really wants to see Paul Rudd in, though, is a diaper. Creating one for Old Miles in Episode 1 proved to be a challenge for Katznelson, who says that the costume department ultimately chose to custom make their own.

"Again, I thought [a diaper] was something that'd be incredibly simple for us to acquire, [but] they're just not camera-friendly, a lot of the ones that are on the market," the designer tells Bustle. "He needed to also be able to do quite a bit of activity in them. And a stunt man also needed to wear them. So both for modesty, comfort, movement, and other design reasons, we chose to make them." Fortunately, she says, "Paul was a good sport about it."