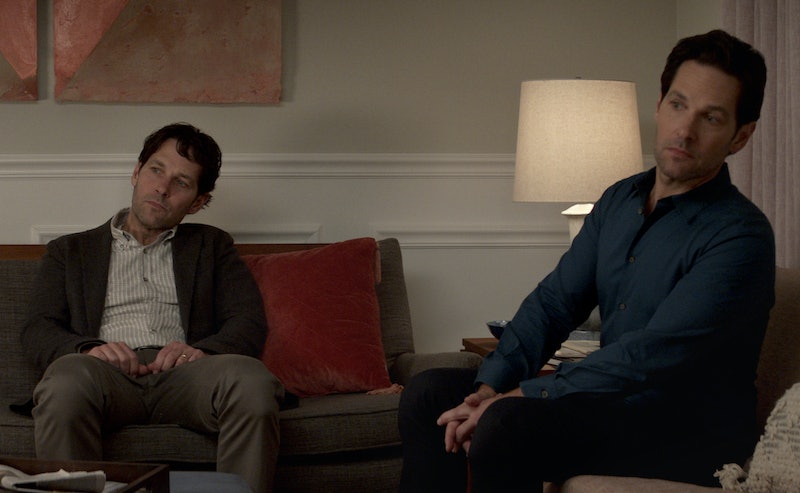 Spoilers ahead for Living with Yourself Season 1. Timothy Greenberg's Netflix series follows a morose ad-man named Miles (Paul Rudd) whose monotonous life causes him to visit Top Happy Spa. The hole-in-the-wall promises to take away his pain, but of course, his problems only double (literally) when they clone his DNA and bury the real Miles alive. While the rest of Season 1 follows both Old Miles and, Rudd called him while speaking to Bustle, New Miles on this downhill trajectory, the Living with Yourself ending gives audiences a small glimmer of hope that things will be all right for the dynamic duo.

It's immediate from the jump that New Miles is an improved version of the original. He's more handsome, wears nicer clothes, slicks his hair back, and exudes the charisma that Old Miles lost years before. Naturally, he's also more talented than his predecessor and begins going to work for him. Much to Old Miles' delight and chagrin, New Miles quickly regains the reputation he had years before — back when he had creative ideas and won the prestigious Golden Pencil award for his copywriting.

That Miles is essentially in a competition with himself is a fascinating idea and one that Living with Yourself explores at length. How can you be jealous of someone who is literally you? Or is New Miles really Old Miles? They share DNA, yes, but they don't actually share the same experiences, although New Miles remembers them vividly. It's obvious that Miles 1.0 is obsessed with the man he used to be, mourning his fall from grace into the schlubby, depressed, and unsuccessful person he's turned into. New Miles is only rubbing it in.

Of course, this competition extends to Miles' marriage, which is essentially in shambles after years of infertility. Audiences see a flashback to a happier time — back after he and his wife, Kate (Aisling Bea), had their first miscarriage and decided to move out of the city. Although they'd suffered one loss, the couple was still optimistic that they'd soon have a growing family. Present day, it's evident just how devastated they've become. They hardly speak, Miles no longer tells charismatic stories at parties, his work is suffering, and they're both clearly miserable.

Once New Miles arrives on the scene and starts subbing in for Old Miles, Kate notices that her husband's been acting weird and eventually learns the truth. Soon, she begins to fall for New Miles. It's certainly understandable, since he's sweet, communicative, and attentive — all of which Old Miles stopped being long ago. There's not exactly a blueprint for this type of situation, either. If your husband duplicates his DNA at a strange New Jersey spa, is that clone also your husband? He has the same memories, after all. He remembers your wedding dance, their antique credenza, and their entire relationship history — even if he didn't experience it himself. Kate and New Miles eventually sleep together, which does not go well, much to Old Miles' satisfaction.

Throughout Season 1, audiences see Old Miles repeatedly dodging calls from their fertility clinic, where he's scheduled to have a check-up. He's convinced that he's the problem with their inability to conceive and doesn't want to face that reality. But when he does finally take the plunge and have his sample analyzed, the clinic informs Miles that his little swimmers are doing fine.

That's when everything hits the fan. Old Miles and New Miles become so frustrated with the havoc that the other has wreaked on their life and both set out to kill each other. What starts as a fistfight turns into a hug, and they come to a understanding. Enter Kate, who informs her husband and one-time lover that she's pregnant, and she doesn't know who the father is. How could she, when both Miles share the same DNA?

The three of them decide to raise the baby together, which is a bizarre decision, but there's not exactly a better alternative. Fortunately, the Living with Yourself ending allows for a Season 2, which — if renewed — will likely be filled with just as much jealous competition and drama as the first installment. But on the bright side, it won't be Old Miles wearing a diaper this time around.