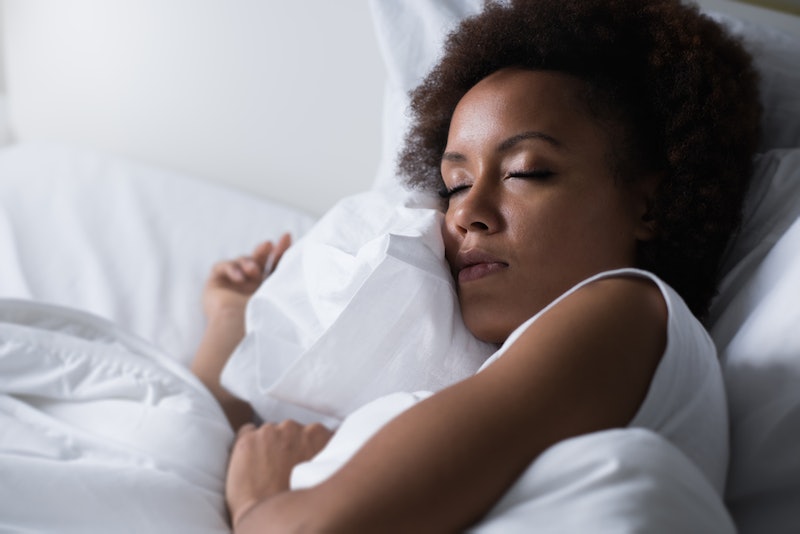 Most of us dream every night, even if we don't remember doing so. Sometimes dreams feel super short (usually if they're about something really good, like the perfect date with your celebrity crush). Other times, they can feel like they're going on forever, the entire night, which can be particularly annoying if they're scary or causing you anxiety. If you've wondered about the actual length of an average dream, you certainly aren't alone. There are a lot of mysterious questions about dreams that researchers are still trying to learn the answers to.

What science does know about dreaming is this: According to Everyday Health, it's basically a mental exercise that happens while someone is sleeping. Dreams occur during the rapid eye movement (REM) part of sleep, which accounts for about 20 percent of the night.

No one really knows exactly why we dream, though. There are a lot of theories out there. According to Psychology Today, some researchers believe that dreams exist to "process intense emotions" or "facilitate consolidation of emotional memories." Some believe that dreams help show us daytime threats so that we can learn how to avoid them, or show us "counterfactual simulations to daytime events" so that we can learn lessons. There are also researchers who don't think dreams exist for any reason, at all, really, they just... do.

As for how longs dreams last, researchers aren't entirely sure, but many believe that varies. For one thing, most experts believe that it's very possible to have dozens of dreams in one night, even though you likely won't remember them all. Lauri Quinn Loewenberg, a dream expert, author, and media personality, told Women's Health, "We dream every 90 minutes throughout the night, with each cycle of dreaming being longer than the previous." Loewenberg added, "The first dream of the night is about five minutes long and the last dream you have before awakening can be 45 minutes to an hour long."

Still, other researchers aren't exactly sure about the length of dreams. Psychology Today says that REM sleep can last up to 45 minutes, leading them to believe dreams can be that long... but the thing is, they have no definitive method for timing them, so they really can't be sure.

That doesn't mean studies haven't been attempted on the subject. Dream and sleep researcher William Dement conducted two studies that showed that dream time was similar to real time. Dement monitored sleepers and recorded the length of their dreams by observing their rapid eye movement. He would then wake dreamers and have them write down a description of their most recent dream, assuming longer dreams would require more words than shorter ones.

If you're looking for a short and sweet answer here, there really isn't one. Because dreams are so difficult to record in an absolute way, researchers can't say exactly how long they last. They can estimate, which they've done, but they don't know for sure, and until something radical changes, they won't. We can assume that dreams don't go on for longer than about 45 minutes, though, which makes sense considering all of the evidence.