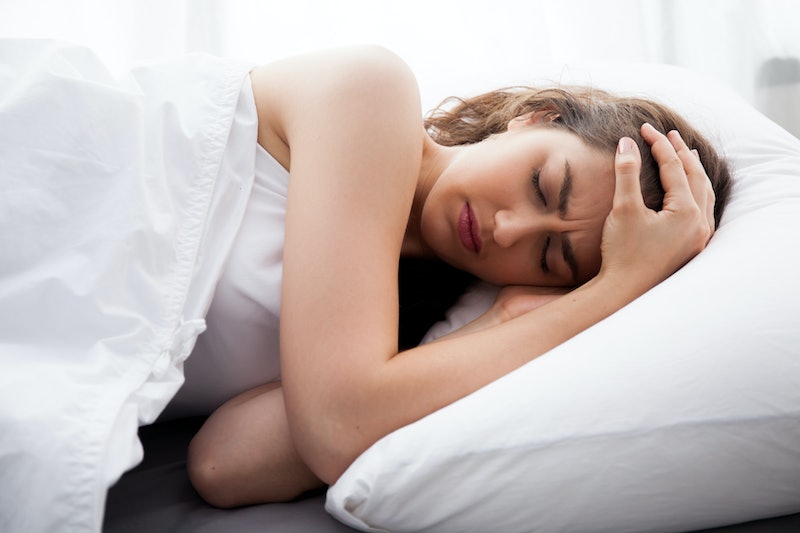 While the phrase “Dark Triad” may conjure up images of ghoulish figures or ominous villains in a movie, it’s actually a popular scientific term in the field of personality psychology. As the name suggests, the dark triad is a set of traits that are, well, pretty #dark. A new study suggests that what you experience in your dreams at night may be a decent indicator of the personality traits you possess when you're awake (more specifically, the Dark Triad of personality traits).

Coined in 2002, the term refers to three particularly negative personality traits: Narcissism, psychopathy, and Machiavellianism. People who exhibit the characteristics of this personality type tend to manipulate others, seek admiration and special treatment, and be more callous and insensitive to others, according to Psychology Today. This often manifests into behaviors like impulsivity, aggressiveness, and sexual opportunism, the article noted.

The new study, titled “Dark Dreams Are Made of This: Aggressive and Sexual Dream Content and the Dark Triad of Personality” (yes, really), was published in the scientific journal Imagination, Cognition and Personality. In the study, which was conducted online and tested a relatively small cohort of 265 participants, the researchers investigated whether the Dark Triad of personality traits had any link to dream content.

Research on the Dark Triad personality has linked it to behaviors that exhibit a “fast life history strategy,” including general aggressiveness and an increased interest in sex. Accordingly, the scientists of this study wanted to assess whether there was an increased frequency of sexual and aggressive dreams in people possessing these personality characteristics. The study assessed participants to see where they scored on the Dark Triad personality criteria, then proceeded to ask how often the participants dreamed about subject matter like hitting something or someone, killing people, shooting people, and sexual experiences with different people.

The study results showed that there was a statistically significant relationship between the frequency of aggressive dreams and the Machiavellianism and psychopathy traits. Sexual dreams also displayed a positive correlation with psychopathic and narcissistic traits, meaning people who scored higher on these traits tended to have more frequent sex dreams.

The researchers concluded that their results suggest that individuals high in the psychopathic personality trait may “simulate evolutionarily relevant actions” in their own dreams. But their results should also be taken with a grain of salt — the researchers emphasized that their findings are only an “intriguing association,” AKA having a violent or sexual dream doesn’t automatically mean you are a psychopath or narcissist.

Full disclosure, though: dream science is one of the particularly murkier areas of psychology. The history of interpreting dreams is rife with controversy, The Cut reports, but there is a steadily increasing body of research in the field disproving some of the more pseudoscience-y aspects in the area.

Personally, I’ve lost count of the number of times I’ve woken up from a strange dream and wondered what it all meant. The results of the study suggest there may be some sort of underlying link between the people we are in real life and what we dream about in our sleep.