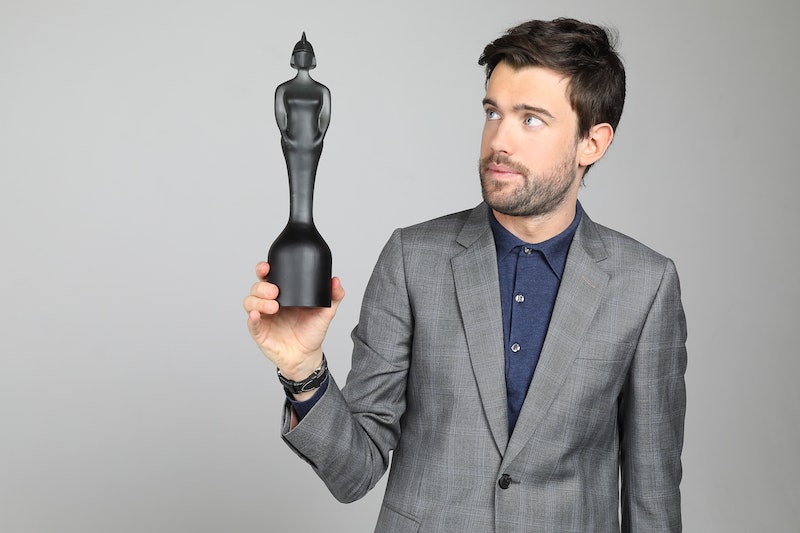 The BRIT Awards are back once again to celebrate the very best of pop music over the past year. The 2019 ceremony will welcome some of the biggest acts in music — many of whom will be performing live. Speculation about who might be lucky enough to walk away with a trophy has been going on for weeks now, and I can't wait to see whether my guesses were right. Host Jack Whitehall will preside over the broadcast, but how long are the BRITs 2019?

According to the Radio Times, the annual ceremony will be broadcast completely live, and air on ITV1 on Wednesday Feb. 20 between 8.00 p.m. and 10.20 p.m. — which means viewers can look forward to more than two hours of pop music festivities. The ceremony itself will be held once again at the O2 Arena in London, where the award show has taken place since 2011, the Radio Times reports.

One of the artists leading this year's nominees is Dua Lipa, who, as reported by Variety, is returning to the BRITs with four nominations following her double win at the 2018 ceremony. This year, the "New Rules" singer has managed to bag herself nominations in the coveted British Single and British Artist Video categories, while newcomer Anne-Marie, who ties with Lipa as the most nominated artist of the evening, received nods in the British Female, British Single, British Artist Video, and British Album of the Year categories.

Elsewhere, George Ezra has amounted a very respectable three nominations for British Male, British Album of the Year, and British Single, and Jorja Smith, who, according to the Radio Times also enjoys three BRIT Awards nods, has been shortlisted in the British Female, British Breakthrough, and British Album categories. Other British Acts to be formally recognised include Little Mix, Tom Walker, Rita Ora, Calvin Harris, The 1975, Jess Glynne, Florence + The Machine, Rudimental and Clean Bandit, all of whom are up for two awards.

One other star of the show comes in the form of the BRIT Awards statue, which is designed by different artists and designers each year. Previous statue designs have been created by the likes of Vivienne Westwood, Damien Hurst, Tracey Emin, Zaha Hadid, Peter Blake, and Anish Kapoor. However, this year the famous statue has been designed by architect Sir David Adjaye. As reported by the Radio Times, Adjaye's design is cast in solid glass, and takes the form of the female personification of Britain, known as Britannia. When speaking of his female-inspired design, Sir David explained: "My take on the BRIT trophy is the manifestation of a great material forged in fire and shaped into the body of a woman. She is unique, and proportionally she is very different."

In addition to an already exciting lineup, the 2019 ceremony will be opened by Hollywood superstar Hugh Jackman. According to the Huffington Post, the actor is set to perform music from the hit 2017 film The Greatest Showman. When discussing the upcoming performance, BRIT Awards chairman Jason Iley said: "It’s only fitting that the UK’s biggest celebration of musical successes should be kicked off with a performance from the biggest selling album in the UK of the last year."