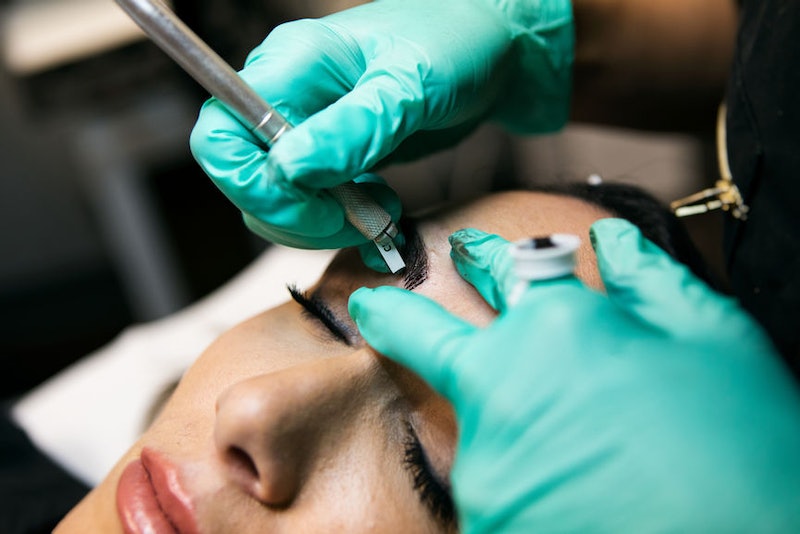 At the beginning of 2017, a new eyebrow trend kicked off. Microblading, otherwise known as semi-permanent brow tattooing, became the latest procedure to be booked up by celebrities (Michelle Keegan and Lena Dunham are both fans). You've probably seen the impressive effects plastered all over Instagram, but the question of how long does microblading last is rarely talked about.

The procedure, in case you didn't know, involves tattooing hairlike strokes onto your brow area, filling in any gaps and creating a fuller effect. Given the fact that the marks are actually tattooed onto your face, many assume the results are permanent. That concept, the idea of something being permanent, turns a lot of people off. But this isn't true. It isn't permanent. Although microblading works in a similar way to a regular tattoo inking, it doesn't go anywhere near as deep into the skin, meaning that the effects do fade away after some time.

According to the professionals, microblading can last between 12 months and three years. If you look after your brows, it'll last longer, but if you don't, then you'll be back to square one. "There are a lot of factors that contribute, including sun exposure and your skincare routine," brow wizard Piret Aava told InStyle. To hold onto your beautiful brows for as long as possible, beauty experts advise staying out of the sun when you can and avoiding harsh exfoliants such as glycolic acid and retinol as this will literally take the top layer of skin (and therefore the colour) off.

When it comes to the procedure, another common question often asked is does microblading hurt? The truth is, no, not really. A Glamour journalist who underwent the two hour procedure described it as "uncomfortable, but not painful" and said the pain was "way less than that of a tattoo." You can expect to feel a little scratching every now and then. However, a topical numbing cream will be applied to the brow area before starting so you really shouldn't feel much pain at all.

But a semi-permanent procedure like microblading doesn't come cheap. The cost can range between £300 and £600 depending on the location and expertise of the microblader. More expensive appointments will usually include the cost of a follow-up. However, make sure you get to grips with all of the additional costs before going ahead.

A few other pointers to consider before booking your first appointment is what shape and colour you would like your new eyebrows to be. While experts can help you decide (and will show you your desired shape before going ahead with the microblading), there's nothing wrong with doing a little pre-planning. It's also a good idea to stay away from products that can thin your skin or blood for a week prior the procedure, with Elle reporting that include retinol-based skincare, aspirins, and alcohol should all be avoided.

As for the actual procedure, it works using a pen made up of a number of super fine needles. Just like a tattoo gun, the device implants coloured pigment under the skin. As the tip is so fine, it can give the illusion of hairs that don't look like they've been drawn on, landing you with the brows of your dreams.

Following the procedure, you will be given a list of things to follow in order to keep your brows looking in tip-top condition. A little redness and minor swelling is perfectly normal so don't panic when you wake up the next morning. The day after having microblading, you will need to apply a cream that you will have been given in the clinic. This is usually applied every few hours and will continue onto the second day post-microblading. From day three until day eight, you can reduce the cream application just to morning and night.

It is recommended that you don't have anything important to do for two weeks after your microblading appointment. This is because your eyebrows will go through a stake of flaking and peeling; something that you might not want to remember in your wedding pictures, for example. Any itching can be counteracted by a little Vaseline. But whatever you do, don't pick at your brows.

The next thing you need to remember is not to get your eyebrows wet for up to 10 days after the procedure. That includes sweat from working out as well as everyday things like showering. You will also need to keep any makeup away from the brow area and avoid other cosmetic treatments such as facials for around four to six weeks.

After the procedure, at first, your brows will look way too dark. But rest assured that the colour will fade dramatically within two weeks. If you follow the instructions and take care of your brows, you could reap the benefits of microblading for years to come. Say bye bye to brow pencils and hello to technology.

More like this
How To Style Your Hair For A Festival, According To Maya Jama’s Hairstylist
By Tomi Otekunrin
Kiehl’s Just Launched Eco-Friendly Cleansing Bars
By Jessica Morgan
Rihanna’s Makeup Artist Isamaya Ffrench Is Launching Her Own Makeup Line
By Tomi Otekunrin
Charlotte Tilbury Just Added A Glow Tonic To Her Skincare Collection
By Tomi Otekunrin
Get The Very Best Of Bustle/UK