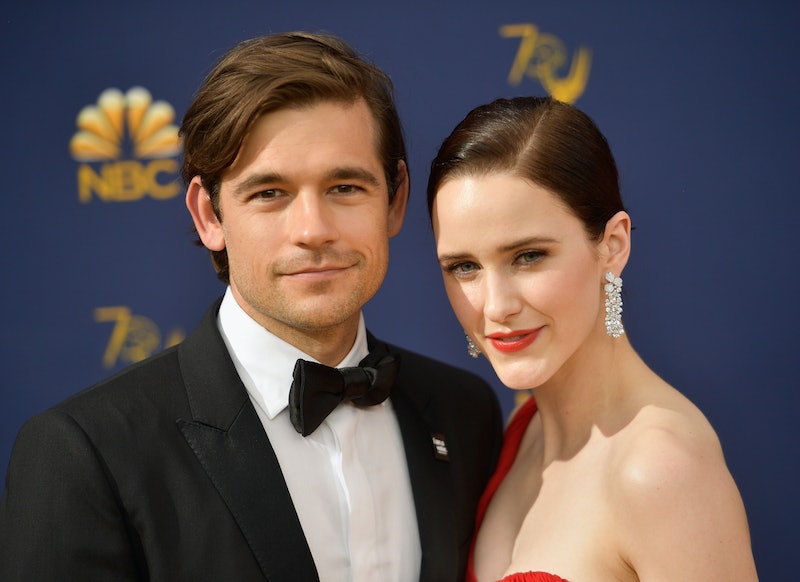 When the Golden Globes air Sunday, Jan. 6 on NBC it could be a big night for The Marvelous Mrs. Maisel star Rachel Brosnahan, who's nominated for Best Actress in a TV Comedy or Musical. And if the last awards cycle is any indication, her reported spouse will likely be by her side as she waits to see if her Amazon series will sweep the Globes as it did the 2018 Emmys. And Rachel Brosnahan's rumored husband Jason Ralph is an accomplished actor, too. While it's unclear if the couple is married, one thing is certain: their relationship goes way back to 2015 when they met on the set of WGN America's Manhattan, according to PopSugar.

Reports that Brosnahan and Ralph are married first surfaced in the fall of 2018. According to People, the actors reportedly tied the knot sometime last year, but neither of them have confirmed the rumors. (Bustle reached out to Brosnahan's representatives for comment, but did not hear back by the time of publication.) People also reported that they were both spotted wearing rings on their left hands at the 2018 Emmys, but that's not confirmation that they're husband and wife.

Brosnahan and Ralph happily step out together for red carpet events, but they keep their private life out of the spotlight as much as possible. Because of this, it may be some time before they reveal their relationship status — if they ever choose to do so at all. Despite their desire not to discuss their relationship with the public, you can get to know Ralph better thanks to his roles on not one, but two fan favorite TV series.

The 32-year-old actor plays the lead role of Quentin Coldwater in Syfy's series The Magicians, and still makes time to guest star on TV Land's Younger alongside Sutton Foster. Prior to his role in The Magicians, Ralph had roles in shows like Aquarius, Manhattan, and Madam Secretary. In a 2017 interview with Guide Live, the Texas native revealed that he's a bit of a workaholic. In addition to his regular acting gigs, he told the site that he also runs a theater company in New York.

When it comes to social media, the actor seems to mostly abstain, but if his Instagram is any indication he does have a weakness for posting photos of his dogs. The one thing you won't find on his 'gram? Candid photos of Brosnahan. These two take keeping their relationship out of the spotlight to a whole new level. But even without cute couple photos, Ralph still supports his reported wife's work. In March 2017, he shared an official photo from The Marvelous Mrs. Maisel captioned, "Zero bias alert: THIS SHOW IS SO GOOD AND YOU SHOULD WATCH IT. The Marvelous Mrs. Maisel on Amazon!!"

Brosnahan's career has been on fire since the first season of The Marvelous Mrs. Maisel dropped on Amazon, and it's showing no signs of slowing down. She already took home the 2018 Golden Globe for her role, as well as the Emmy, and there's a good chance she'll be adding another trophy to her shelf on Sunday night. Through it all, Ralph has been by her side and cheering on — whether they're married or not, it seems clear that these two have a relationship that's goal-worthy, even though the only time fans get to see them together is when they're walking the red carpet.

More like this
'The Bachelor's Peter Weber & Kelley Flanagan Are Reportedly Back Together
By Grace Wehniainen
Gisele Bündchen Appears To Address Those Tom Brady Divorce Rumors
By Radhika Menon
Everything To Know About Taylor Swift’s 10th Studio Album, 'Midnights'
By Grace Wehniainen and Jake Viswanath
Devon Diep From 'Bling Empire' Wrote A Song About Her “Second Chance At Love”
By Grace Wehniainen
Get Even More From Bustle — Sign Up For The Newsletter

This article was originally published on Jan. 6, 2019