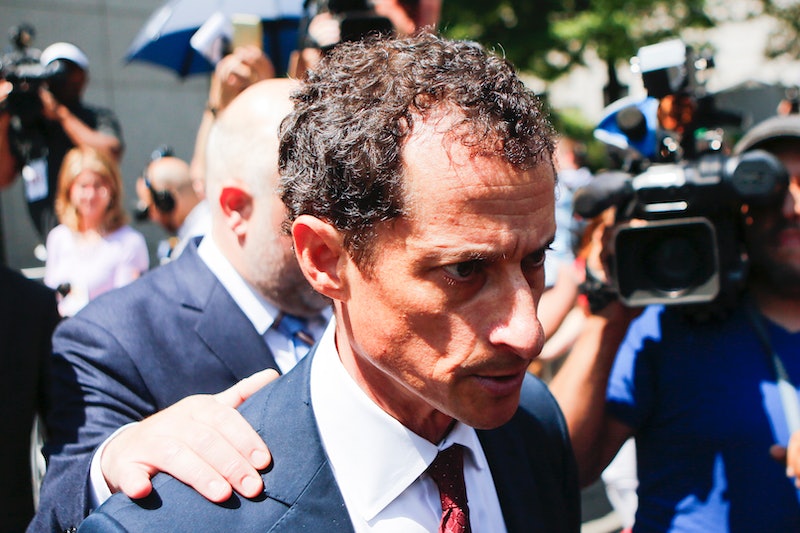 Former U.S. congressional representative Anthony Weiner was sentenced Monday for a sexting scandal that was revealed last year as part of the FBI investigation into Hillary Clinton's use of private email servers while Secretary of State. Weiner will serve up to 21 months in federal prison for coaxing an underage girl to undress and perform sexual acts via video chat.

Weiner pled guilty to one count of sending obscene material to a minor in May. The charge carried a maximum prison time of 10 years, which makes Weiner's 1.75 years seem practically like a bargain. The disgraced former congressional rep will have to turn himself in to the feds by November 6, almost a year to the day after the presidential election that he unwittingly influenced.

According to The New York Post, his lawyer has requested that Weiner serve in the Schuylkill Federal Correctional Institution in Pennsylvania, a medium security center. As part of his sentence, Weiner will have to complete treatment with Sex Addicts Anonymous. It's unknown at this time whether Weiner will have to register as a sex offender, or whether he will be eligible for parole before the end of his 21 month sentence.

“I have a disease, but I have no excuses,” Weiner said in his sentencing statement to the court. “’I’m an addict.”

In possibly one of the most bizarre political twists in American history, Weiner's conviction was years in the making, in fact, years before he had even committed the act in question. Back in 2011, a journalist happened to snap an iconic picture of Clinton as she scrolled through her Blackberry, which seemed odd to State Department employee Clarence Finney.

Clinton had stated early in her term as secretary that she would not be using an official State.gov email address, as required by federal law for electronic communications regarding some classified information. Finney himself did not testify before Congress, but State Director of Executive Secretariat Staff Karin Lang said on the record that Finney could not recall who initially told him that Clinton had never set up an official government email, or who confirmed that she still had not done so.

A Freedom of Information Act request led to the seizure of Clinton's electronic recordings by the FBI, which eventually included a laptop belonging to longtime Clinton aide and Weiner's now estranged wife, Huma Abedin. Weiner's lewd messages from 2016 with the then-15 year old girl were discovered on their shared computer.

Arguably, Finney's semi-good memory eventually led to Clinton's loss in the presidential election, as well as Weiner's conviction. Although Clinton had a commanding lead going into the final stretch of the campaign, former FBI director James Comey's announcement that he was reopening the investigation due to Weiner's emails came too close to Election Day for Americans to forget.

Weiner had several high profile sexual scandals before this conviction, but never involving underage girls. His congressional career was brought down in 2011 when he accidentally tweeted an indecent picture which was later revealed to be part of an ongoing affair. Then in 2013 while running the mayoral race in New York City, Weiner's alter ego Carlos Danger was exposed by a woman he sent semi-nude pictures to. However, none of these previous actions led to criminal charges because they were not involving a minor.

Social media was alit with commentary regarding Weiner's sentencing Monday morning, which many people seem to feel, for either moral or partisan reasons, was not strict enough. However, either way, there doesn't seem to be any way that Weiner will be able to recover his political career, meaning at least one of his consequences of his indiscretions should last much longer than his prison sentence.

More like this
Iran Has Issued A Death Sentence Over Mahsa Amini Protests
By Catharina Cheung, Darshita Goyal and Maxine Harrison
Ghislaine Maxwell Is Serving Her 20-Year Prison Sentence In Florida
By Gretchen Smail and Brad Witter
Casey Anthony’s Father Said He Was “Ready To Forgive Her” Before She Renewed Allegations
By Brad Witter
William Reece Committed Another Murder Not Seen In 'The Texas Killing Fields'
By Grace Wehniainen
Get Even More From Bustle — Sign Up For The Newsletter