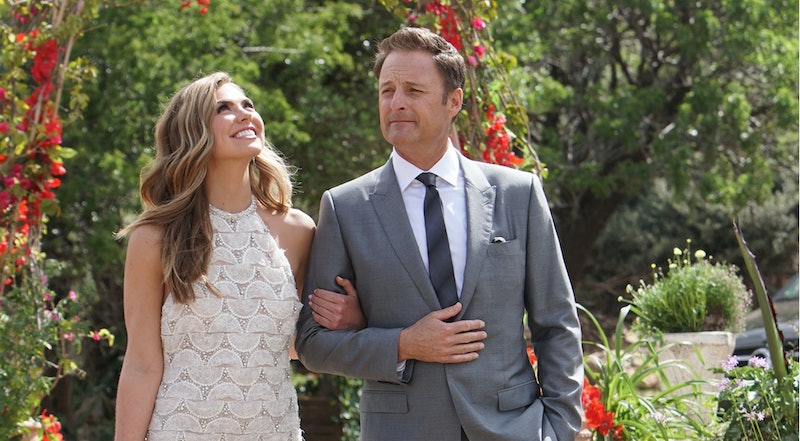 After many steamy one-on-one dates, several rose ceremonies, and more of Luke P. than fans ever wanted to see, Hannah's season of The Bachelorette is finally drawing to a close. But considering she still has three men to choose from, there's a decent amount of story left to wrap up. So, uh, exactly how long is Hannah's Bachelorette finale? Luke P.'s time on the show may be over at long last (no, for real this time!), but there's still plenty of non-Luke P. drama ahead.

On June 18, aspiring musician Haley Stevens claimed in an interview with People that Jed was still in a relationship with her when he went on the show. Jed himself admitted to Hannah that he'd signed up for The Bachelorette in order to advance his music career, but assured her that after getting to know her, he was developing genuine feelings. Jed hasn't returned Bustle's request for comment about Stevens' accusations or addressed them publicly, aside from a vague Instagram post asking for viewers to be patient until he could share his side of the story. Regardless of how it plays out in the finale, something of this magnitude will certainly take a while to dissect, and fortunately, ABC has carved out plenty of time in the schedule to do so.

In recent Bachelor/ette seasons, the franchise has taken to merging the finale and After the Final Rose special together, cutting back and forth from the season to the live studio audience so that Harrison can interview key people right after something major happens instead of waiting until the very end. This means that the finale will be split into two parts: one two-hour installment on Monday, July 29 from 8 p.m. to 10 p.m. ET, and another the following evening on Tuesday, July 30, also from 8 p.m. to 10 p.m. ET.

Sure, having a four-hour finale may seem a little extreme, but keep in mind that Hannah still has to eliminate someone from the Fantasy Suite rose ceremony, the remaining two men need to meet her family, and of course, the final rose ceremony (which may or may not end with an engagement) has to take place. Add all of that in with the Jed controversy and that's still quite a bit of ground to cover, especially since Harrison recently told Entertainment Tonight that he fully intends on addressing the accusations against Jed and getting to the bottom of things once and for all.

This will indeed, Papa Harrison. Buckle up, Bachelorette fans, because this may actually be the "most dramatic" finale we've ever seen — former Bachelorette Ali Fedotowsky confirmed as much to ET herself.