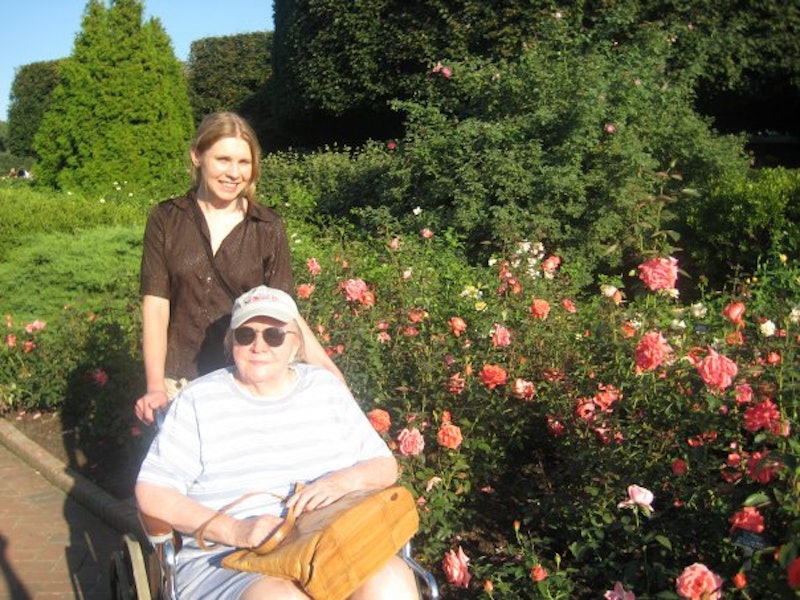 Every time I hear a train whistle, I think about my grandma.

She raised me, and when I turned 11, she had a surprise: A trip to California. Only, we wouldn’t be flying there from Chicago; we’d be taking the train. At the time, I didn’t care how we got to California — I just wanted to see the Pacific Ocean in real life. Soon, we were on the Southwest Chief, a two-day Amtrak train trip from Chicago to L.A. She’d packed my bag and I’d packed my favorite Barbie doll (and her swimsuit). The three of us — plus my 10-year-old brother — had a family sleeping car, which meant we not only had seats, but beds, too, like a mini hotel room. I remember feeling like we were royalty: We also had our own bathroom and shower, complete with toiletries, like almond-scented soap (which I can still smell today). But, having our own bathroom on the train was a big deal; the others were communal if you’re seated in coach or business class. And, we got meals in the dining car, included with the ticket — another royalty boost. My brother and I were as excited as kids who won tickets to their favorite concert; only, the train ride was the main act.

Sure, it would have been just four hours to fly, not 40ish on a train, but with the latter comes one main perk: Freedom. During the ride, you have the ability to walk around and sit in different train cars, from your assigned seat to the observation car, wherein the huge windows allow you to see more than you do from any other train car. After a couple hours of wandering around, I was exhausted.

“I want to take a nap,” I remember saying to my grandma.

“The sun sets soon; you can nap then,” she said. “Once it’s dark, it’s dark; you need to enjoy the scenery while you can. It’s all about the journey.”

There was no arguing with her, so I obeyed. My grandma had my brother and I befriend fellow passengers by playing cards, like UNO, with them. After that, we’d get seated with strangers in the dining car — which was like an elegant restaurant on wheels, complete with small vases of flowers on the tables — who quickly turned into friends.

When we weren’t meeting new people and playing cards, we’d snack on mini pizzas from the lounge car between games. Other times, my brother and I would sit still by our grandma’s side in the observation car to watch the unending scenery on the other side of the window, from a mother cow teaching her calf how to walk to watching locals fish in crystal-clear rivers. As night came, we’d watch the daylight disappear and get replaced with Easter egg-colored sunsets. Even later, we’d try to spot constellations that we’d learned about in science class. And, when we went to bed, the train whistle would lull us to sleep. From train car to train car, my grandma introduced my brother and I to the art of train travel and had us make the most of our days.

After this initial trip, I became addicted to cross-country train travel and started taking long-distance Amtrak trips as often as I could. And, ever since my grandma passed away in 2016, Amtrak trips help me stay connected to her.

This past December, I had the chance to do an Amtrak press trip and try out a train ride I never had before — the Coast Starlight, from L.A. to Seattle, which is a 35-hour journey. I had taken several dozen other cross-country Amtrak train routes over the years, particularly my grandma’s favorite, the Southwest Chief from L.A. to Chicago (and back) a couple times a year, once in the winter and once in warmer weather, as the scenery is different each time. So, I was excited to try out a new route, especially one along the Pacific Ocean’s coastline.

Also, I hadn’t gotten a private room on an Amtrak train since my voyages with my grandma, and it was nice to have one again. Since I was alone, I didn’t need a family room like last time, but they gave me a roomette, where your seat faces another seat (that may be filled by your friend, loved one, or no one). Then, at night, the Amtrak attendant assigned to your car magically converts the seats into a bed (or bunk beds if there are two of you). It reminded me of a capsule hotel. If you’re claustrophobic, it may not be for you, but if you want some privacy instead of sleeping in a train car full of people, it’s perfect. As for bathrooms, they’re right down the hall, and there’s a shower, too.

When I first got on the train and into my roomette, as the train whistle blew, signaling that we were leaving, I thought my grandma would appear across from me. I pretended she had and knew she’d want this trip to be like all of our Amtrak trips — “Try different foods each time you’re in the dining car,” “Ask anyone and everyone to play cards; someone always wants to play cards,” “Stay awake during all daylight hours so you see as much scenery as possible,” “Take a lot of notes, mentally and physically,” and “Have a drink for me!” Since it was around Christmas, I had eggnog with a splash of whiskey in her honor. But, most of all, she’d say, “Don’t forget to enjoy the journey” — because, in this case, the journey is the destination.

So, on my Coast Starlight train, I took all my grandma’s advice. I met people from around the world, whether they were sitting next to me in the observation car, randomly seated across from me in the dining car, or we crossed paths in a train hallway.

During a rest stop, I met a woman who was on her way to Vancouver to see family for the holidays. I also saw a grandmother chasing after her grandchildren to get them back onto the train. Back on board, in the observation car, I met a college student from Germany who was visiting various states in the U.S. While the friends she was with chose to fly from destination to destination, she chose to take various Amtrak routes.

“I want to actually see America, and not just from the sky,” she said as she snapped photos of the Pacific Ocean, palm trees, and the sunset from the huge windows. “This is a great way to do so.” (My grandma would have loved her.)

Later, I ate dinner in the dining car and was seated with a couple other passengers. One was in his 70s and going home to see his wife in Washington while the other was in his early 20s and in film school in L.A. I’d gone to film school in L.A., too — one that rivaled his — so we talked about that a while, and he also showed me a video he made of taking his grandma on an Amtrak trip recently. (I swear, we were fated to sit at the same table; there are no accidents!) I also befriended a couple around 80 years-old who’d been friends for decades, but just started dating a few months prior after they’d both lost their spouses to illnesses. (Later, I saw them reading a book to each other when I passed their roomette, and it was the sweetest moment ever.)

No matter who I met, there was a common theme among us all — connection. Everyone had a different reason for riding the train, whether they were scared to fly; had the time and wanted to enjoy the scenery; used to work on the train and were now retired, so wanted to try being a passenger instead; did it annually; were trying it for the first time; or were raised by their grandmothers who got them into it. And when you spend 35-plus hours with a bunch of people on a train, you quickly go from strangers to best friends by trip’s end. Of course, people are constantly getting off the train, and some of your new train friends will, too. But no matter how much — or little — time you spend with them, you’ve just made new friends for life.

Plus, Amtrak is the perfect setting for a writing and/or self-care retreat. As a digital nomad, I work remotely and love doing so on the train. WiFi and cell reception barely work, if ever — I mean, you’re going through the mountains and are often in desolate areas — so it’s a great time to technologically disconnect from the world. If you’ve never tried a digital detox, now’s the time. Plus, you can socialize as much — or as little — as you want, which leaves you plenty of “you” time to write, read, think, people-watch, look out the window, and so forth. One minute, you’re coasting along the Pacific Ocean in California, watching palm trees blowing in the wind; the next, you’re going uphill through the mountains in Oregon, almost as though you’re on a roller coaster, surrounded by beautiful snowy trees that look like they belong in a Christmas movie. And, as you look out the window and the train passes houses or train depots in the middle of nowhere, nothing’s better than seeing all the people waving at you and the other passengers, as old-time nostalgia has suddenly entered the picture, their faces as excited as yours. Finally, you’re going to bed, looking at city buildings in the distance, twinkling like stars, and then spotting actual stars as the train whistle soothes you to sleep.

To me, riding the train is an excitement that never ends; while some people think a two-day train ride seems too long, I think it’s not long enough. And while some people say Amtrak is known for its delays — I feel delays just extend the journey for the better. They’re just like plane delays — unpredictable — and you have plenty of options with how you can spend that time.

Each train ride I take is full of new surprises — whether it’s the scenery or the people — but each ride also brings me back to that first Amtrak trip I took with my grandma. Ever since her death, I feel riding Amtrak now is more important to me than ever before, to keep her essence alive, and to keep my zest for life and travel alive, too. And each time I hear a train whistle, on or off a train, it gives me a feeling of comfort and safety, as though my grandma is saying, “Don’t forget to enjoy the journey.” I won’t, Grandma, I won’t.