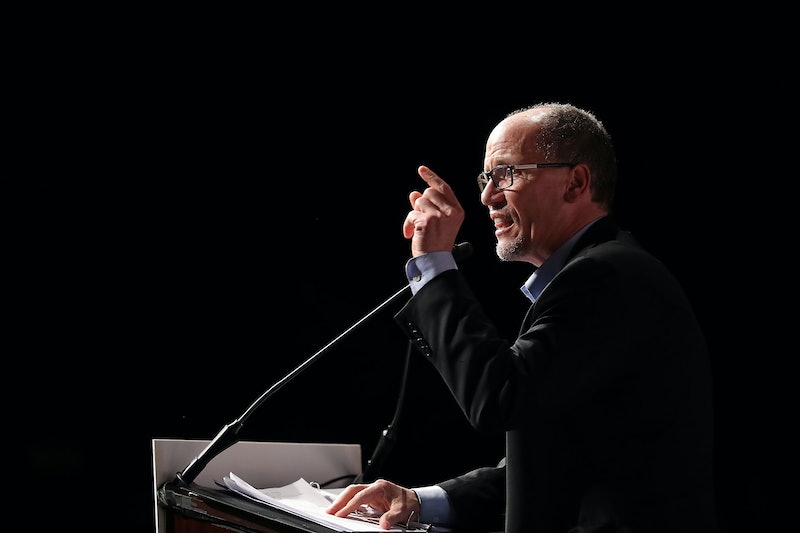 Yes, the 2018 midterms just happened, but the Democratic Party is already gearing up for the 2020 presidential primaries. The Democratic National Committee (DNC) has announced how many Democratic primary debates there will be — making it clear that it's going to be a very long campaign.

As the DNC announced on Thursday, there will be a grand total of 12 Democratic primary debates. Six will take place in 2019, and the last six will happen in 2020. The final event is slated for April 2020, just over six months out from the presidential election and only two months before the Democratic National Convention, as CNN reported.

So far, there are many Democrats considering a run for president, but no one has publicly confirmed that they're running yet. Democratic voters will certainly have a wide range of choices to consider on just about every front. As The Washington Post discussed, even just the "top tier" of potential candidates — as in, those coming in with significant name recognition and respect already built up — includes former Vice President Joe Biden, Sens. Bernie Sanders and Elizabeth Warren, and Rep. Beto O'Rourke. However, there will likely be more than a dozen serious contenders.

You won't have to wait too long for the field to shape up, as the first debate is scheduled for just about six months from now, in June 2019, as NPR reports. By then, anyone who's serious about running should already be in the race.

According to Perez, the goals of the debate are "making sure every candidate gets a fair shake and making sure voters across America have an amble opportunity to get to know the women and men seeking the nomination of our party." He explained that they'd already decided not to have the debate set up that the GOP used for their large field of candidates before the 2016 election. The Republican Party relied on polling to divide the candidates, putting the less popular candidates into smaller debates that happened before the primetime debates and drew much less attention.

Instead of dividing candidates that way, the DNC will split the candidates into two groups randomly and then hold two separate events on consecutive nights, as The Daily Beast explained.

"Drawing lots strikes me as the fairest way to make sure everyone gets a fair shake," Perez said in the press call, according to NBC News.

Even before the 2018 midterms, Democratic hopefuls were beginning to wonder about the debate format, as well as worry about ending up at the secondary debate, as Politico reported. This should quell those fears, while the sheer number of debates will likely satisfy those who criticized the party for only holding six sanctioned debates before the 2016 election. If you're planning on voting in the Democratic primary, then buckle up and settle in, because just the primary is going to last over a year.