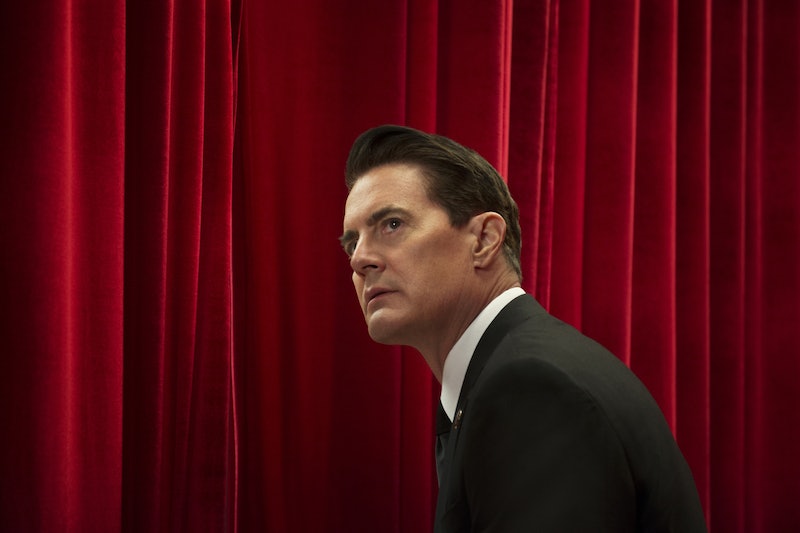 Suzanne Tenner/Showtime
By Allie Gemmill
May 24, 2017

Spoilers ahead for Episodes 1 through 4 of Twin Peaks: The Return! There's more than meets the eye when it comes to the case of multiple Dale Coopers on Twin Peaks: The Return. In Part 3, viewers learn that, in addition to Dale and Bob Cooper (the evil one), there exists a third Cooper lookalike: Dougie Jones. It becomes clear that Dougie is connected to Dale and Bob in the first moments spent with him. One major reveal, courtesy of The One-Armed Man, is that Dougie was "created for a purpose," which implies that both Dale and Bob may be involved in this greater metaphysical purpose too, whatever it is.

But first, the good news: Dale Cooper makes it out of the Black Lodge, out of that weird glass box in New York City, and out of a scary inter-dimensional room, complete with a fireplace, a blue rose, and a woman with no eyes. (Yeah, that was a bit too scary for my liking, too.) As Dale figures out that he can get sucked through what appears to be a human-sized socket in the wall of this eerie room, Bob appears to be affected by this transition. As he drives through the plains of South Dakota, he begins to go woozy, swerving around, and ultimately crashing his car. He ends up spitting out creamed corn — a food which bears great and creepy significance in Twin Peaks lore — which signals that he is being pulled back into the Black Lodge where he belongs.

Meanwhile, Dougie is introduced. First seen perched on a bed with a woman who is either a girlfriend or a sex worker, Dougie is a man of few words and bushy hair. As he gets off the bed to put on his blazer, it's evident his left arm is immobile and his left hand is sporting the owl cave ring. Both the "dead" arm and the owl cave ring are references to Twin Peaks: Fire Walk With Me, indicating Dougie's connection to the Black Lodge and the death of Laura Palmer in some way.

Dougie is overcome while getting dressed and stumbles into the living room of the semi-empty house where he is having his illicit afternoon tryst. After he coughs up some blackened creamed corn, he disappears and Dale appears in his place. Dougie is transported to the Black Lodge, where he sits confused, being told by the One-Armed Man that he was created for a purpose. Dougie proceeds to evaporate into a golden orb or bead (I'm still not sure which at this point, y'all), leaving the owl cave ring behind.

With the appearance of these three, Twin Peaks acknowledges that more than one Dale Cooper doppelgänger exists, and begs the question: are there even more? Fans still don't know the purpose of their existence, but they do know that these multiple Coopers attract trouble. As Dale leaves the housing development where Dougie once was, two shady dudes wielding weapons stake the development out, attempting to kill Dougie. So what's this doppel involved in?

Now that Dale is back in the real world, Dougie is eliminated, and Bob appears to have survived his crash, there are only going to be more cases of mistaken identity on Twin Peaks. Let's hope it's all sorted out soon, because keeping track of this many Coopers is tricky work.